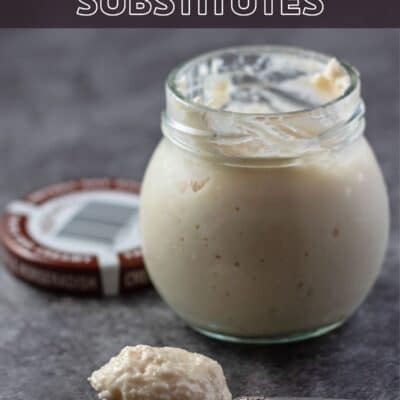 12 amazingly tasty Horseradish Substitute ideas (for both fresh and prepared horseradish) to make swapping out this rich and tangy ingredient super easy! No matter what you're making, all of the best alternatives for horseradish are shared here!

All of the very best horseradish substitutions to help master your recipe in a pinch!

No matter what you're making, finding out that you're missing an ingredient once you've already started can be quite the surprise! However, there are (almost) always some very suitable substitutes that you probably have on hand!

I'm sharing all of my best horseradish substitutes here for your easy reference! Plus, I've broken some of them down to best suit specific recipes that you may have in the works!

Horseradish, most often used as a culinary condiment or spice, comes from a plant that is related to mustard, wasabi, broccoli, cauliflower, and even brussels sprouts. It is native to Russia and Hungary but is grown in many different parts of the world.

The white root of horseradish is used in cooking in a variety of different ways, such as grated, dried, powdered, or creamed. Like wasabi, you can count on horseradish to add a spicy kick to your plate.

The next best alternative is to use wasabi paste, simply because of the high concentration of horseradish used in making wasabi and wasabi paste.

Horseradish sauce is made with a cream base, so it won’t be as strong as fresh horseradish.

If you are cautious or don’t like spice, use a 1:1 ratio and increase the amount later. Otherwise, you can start by using 1.5x the amount of horseradish sauce.

Wasabi is very closely related to horseradish and is considered the best substitution if you can find it. In fact, the “wasabi” provided with inexpensive or grocery store sushi is not wasabi at all and is made mostly with horseradish!

This is also true for wasabi paste. Check the ingredients and you may be surprised to see horseradish listed high on the list of ingredients!

You can substitute wasabi or wasabi paste for horseradish with a 1:1 ratio, depending on how spicy you want the result to be. If you are substituting due to an allergy, be careful using wasabi, as it is in the same family as horseradish.

Mustard is another main ingredient in imitation wasabi and falls into the same family as horseradish and wasabi. Again, be careful if substituting due to an allergy, as mustard and horseradish are related.

If the recipe calls for freshly grated horseradish, substitute using mustard seeds that have been ground up using a mortar and pestle. Use in a 1:1 ratio.

If you have a recipe that calls for ground horseradish, use ground mustard in equal parts instead!

Mustard oil (you need to use the essential oil variety that is approved for cooking) can also add that great horseradish 'kick'!

Ginger is another alternative to horseradish if wasabi and mustard can’t be used. The amount that you should use will depend on the recipe and your flavor preference.

Ginger won’t create as much heat as horseradish and could negatively change the flavor outcome of your dish, so it is recommended that you add a small amount of ginger in place of horseradish and adjust from there.

For those who don’t love spice, ginger is a great alternative!

Black radish looks like beetroot, except has a white center. It makes for a good substitution for horseradish, but getting the spice right takes a little work because black radish’s skin houses the heat.

To substitute, use equal parts in a 1:1 ratio.

Daikon radish is a plant that looks a lot like the horseradish plant, even though horseradish isn’t actually a radish. Confusing, right? It has a tangy, mild flavor, as opposed to the peppery taste that radishes are known for.

You can use daikon as a less spicy alternative to horseradish when cooking, especially in soups and stews. Use in a 1:1 ratio, taste, and adjust as needed.

Sauerkraut comes from the lactic acid that salted and shredded cabbage produces. This acidic alternative is best used for savory dishes, like broth or stock, sausage, and cured meats, and will definitely add some depth to your dish.

Parsnip looks and tastes like carrots, except it is cream in color, like horseradish. This root vegetable can be baked, steamed, or mashed and used as an alternative to horseradish, especially in broth or stock and soups, as long as you don’t mind a less spicy outcome.

Rutabaga is another great root vegetable that works as a tasty substitute for horseradish. It's a bit milder in flavor, so you can easily start with a 1:1 ratio and add more to taste.

For each 1 tablespoon of horseradish called for in your recipe, use the following amounts of my 9 items listed above.

Now onto the specifics! If you're in the process of making one of these recipes, I've shared the quick and easy substitutions for horseradish for each recipe here!

Horseradish is a common ingredient in a traditional Bloody Mary. It is known for giving the drink a spicy kick, adding a dynamic flavor to the tomato-based cocktail.

If you don’t have horseradish or don’t like it, don’t worry! You can always substitute wasabi, which is in the same family as horseradish.

It is so similar that some people even call it “Japanese wasabi.” To substitute, use ¼ tablespoon of wasabi per drink, or 1 full tablespoon if making a batch of four.

Alternatively, if you don’t have horseradish or wasabi, you can also use spicy brown mustard. Mustard is made from seeds, not a root, but will still add spice to your drink. To substitute, use a 1:1 ratio of horseradish and mustard.

Note: if you are adventurous and enjoy experimenting with alternative ingredients, you might also add some freshly grated ginger for extra flavor and spice. Why not play around?!

Depending on color preference, both wasabi and mustard are acceptable substitutions for the Horseradish Sauce that typically accompanies prime rib.

If you don’t mind the color green, the flavor of wasabi is a great match. To get even fancier, consider making a wasabi garlic cream sauce for a bold flavor that will leave no guest disappointed.

If choosing mustard, which is another perfectly suitable alternative, you have the option of either serving mustard as a standalone or making a mustard cream sauce, depending on what you prefer.

Even if you don’t have horseradish sauce, you can still make cocktail sauce. The easiest alternative is to drain and use 3 tablespoons of prepared horseradish or 3 teaspoons of grated horseradish (adjust according to spice preference).

Otherwise, you can use the previously mentioned tried and true substitution: wasabi.

Horseradish is a staple of the Seder menu for Passover because it represents the bitter history of slavery that was endured by the Jewish people, but other alternatives can be used.

Instead of limiting yourself to horseradish, try adding arugula, endive, chicory, dandelion, mustard, kale, or romaine, all of which are fresh, bitter greens.

For alternatives that aren’t fresh greens, you can substitute mustard, ginger, or wasabi.

Be sure to check out all of my helpful substitutions for cooking and baking ingredients!

What is horseradish sauce made of?

The basic ingredients of horseradish sauce are prepared horseradish (grated horseradish, salt, and vinegar) combined with either sour cream, mayonnaise, or heavy cream. Depending on who makes it or how it’s made, there may also be mustard, Worcestershire sauce, lemon juice, chives, garlic, black pepper, and more vinegar.

That’s a good question! The origin of horseradish’s name is unclear but there are two theories that offer an explanation.
At one time, the German word for horseradish was Meerrettich. It is believed that the word was lost in translation and that this compound word was broken into two words, the first half, meer, became mare/mahre, which translates to horse, and rettich, meaning root or radish. When you put the two together, the direct translation is horseradish. While this seems to make sense, etymologists have found that there isn’t much evidence of the word mareradidish used throughout history.
The second theory does not require a degree in etymology and instead suggests that horseradish got its name because the plant is strong, coarse, and large, like a horse. It is true, the horseradish plant grows tall, strong leaves and the root itself can grow to be 3 inches in diameter and almost two feet long, so perhaps it’s named after the horse, after all.

Are ginger and horseradish related?

No! Ginger and horseradish are not related.
Ginger is a plant in the Zingiberaceae family that produces yellow flowers, while horseradish is a cruciferous plant with white flowers in the Brassicaceae family that grows like cabbage. Ginger originated in Asia, while horseradish originated in Europe.
The only thing that the two have in common is that they are both root vegetables used for cooking (and for medicinal purposes, too!). Other than that, they are completely different plants and therefore are used differently. 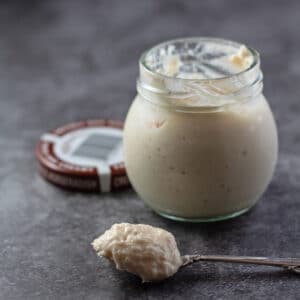 Print Recipe Leave A Comment
Love This Recipe?Click On A Star To Rate It!
4.82 from 11 reviews