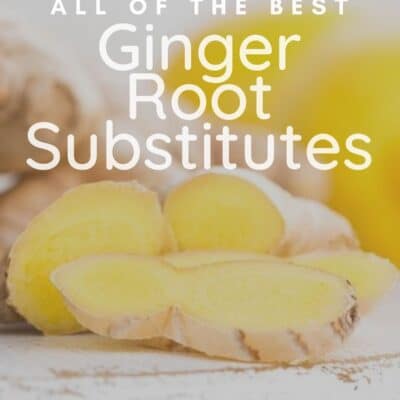 If you're looking for the best ginger substitute, there are plenty of easy options to choose from depending on your dish! Whether you are making something sweet or savory, don't skip the ginger- just try one of these simple alternatives!

All the best substitutes for fresh or dried ginger and how to use them!

Ginger may seem like a unique spice, but it is one of the most frequently used spices around the world. Originating in Asia, over the years it has made its way around the globe and into the kitchens and hearts of people from all different walks of life.

Whether it adds that bit of bite to the ginger beer found in a perfectly mixed Moscow mule, or adds the warmth to gingerbread during winter, ginger is everywhere.

Except for when it is not.

The presence of ginger is often a key flavor in a recipe – used to add spice and a bit of sweetness to a dish. Therefore, leaving it out may result in a lackluster tasting dish.

Even though nothing tastes exactly like ginger, there are a handful of tasty spices that will make sure the warmth of the recipe is maintained.

The Best Substitutes for Fresh Ginger

Fresh ginger is commonly sold in mainstream grocery stores. It is sometimes referred to as ginger root.

Ginger root is easy to include in savory and sweet dishes. Most recipes will call for ginger in volumes like 1 or 2 tablespoons.

Some recipes will specify if it should be grated or sliced. If it is not specified, grating is the easiest way to prepare and measure ginger for use.

Ginger can elevate the flavor of many different dishes. So, once you start cooking with it more frequently you may want to keep some extra on hand. In the case that you find yourself without ginger though, peek in your freezer or cupboard to see if you have one of these substitutes.

While fresh ginger root will stay fresh for quite some time, it can’t hurt to help it along even further. You can anticipate a need for fresh ginger by freezing some for future use.

Simply take fresh ginger root, place it in an airtight bag or container, and pop it in the freezer. Frozen ginger is super easy to use! Just take it out of the freezer, peel, and grate.

If you have a recipe that calls for sliced ginger, you will need to let it thaw first. Moreover, depending on how much ginger you regularly use at a time you may want to cut a large root into chunks before freezing.

Frozen ginger is still fresh ginger, so you can use it in an equal 1:1 ratio.

Beyond freezing your own ginger, many stores now carry frozen Ginger. Next time you are at the store take a stroll down the frozen vegetable aisle.

Frozen ginger is often sold in little packages of about a dozen cubes.

When using frozen ginger from the store, read the label to see how much ginger is in each cube. Then use accordingly in your recipe.

Both ginger paste and minced ginger offer the same spicy kick that fresh ginger offers. This is a result of them being pressed or finely chopped to release the essential oils. Most of these pre-packaged ginger substitutes are also packed in oil.

Ginger paste or minced ginger may also be packaged with additional ingredients like salt and sugar. Therefore, be aware of the brand you own is best for savory or sweet dishes.

Both ginger paste and minced ginger can be used in a 1:1 exchange for fresh ginger. *If you have ginger garlic paste, this will also work (if your recipe calls for both garlic and ginger)!

The next best thing to fresh (or frozen) ginger is dried ginger. Dried ginger is also commonly referred to as ground ginger.

While ground ginger is made from ginger root, it has a slightly milder taste. Therefore, you will not get the same spicy kick that fresh ginger offers. This is because the essential oils in fresh ginger are no longer present once it is dried and ground.

Even though it is missing a bit of its oomph, ground ginger maintains a distinct ginger taste. Moreover, many home cooks find it easier to use in both baking and cooking.

Ground ginger may lose some of its kick compared to fresh ginger, but since it is a concentrated form you will only need a small amount to replace fresh ginger.

Many people find crystallized ginger to be a delicious, sweet treat. Others enjoy using it to settle their stomachs, especially from motion sickness.

Crystallized ginger (aka candied ginger) is made by cooking fresh ginger in sugar water. The cooked ginger is then rolled in sugar. Therefore, it is much sweeter than fresh ginger.

Candied ginger is also less pungent than fresh ginger since it has been cooked. However, it can work well in certain baked dishes. Due to the less pungent taste though, you will need to use more than the recipe calls for.

Use 3 tablespoons of finely chopped crystallized ginger to replace 1 tablespoon of fresh ginger in baking.

Like ginger, allspice is also quite versatile and can be used in both baking and cooking. Even though its name sounds like it includes several different spices, allspice comes from one plant.

As the result of grinding up an unripe berry plant, allspice has a balanced sweet and spicy taste. While its flavor profile resembles elements of ginger, it doesn’t pair with everything that ginger does.

Allspice adds a lovely taste to soups, stews, sauces, and other savory dishes. However, it is not well suited for baked goods.

Start by using a ½ half teaspoon of allspice in place of 1 tablespoon of fresh ginger. If the flavor is not quite strong enough, add more until you reach the desired flavor.

While allspice is well suited for savory dishes, cinnamon is an excellent choice for baking. Even though cinnamon has its own distinct taste. it has a sweet and warm flavor that resembles elements of ginger.

Cinnamon also naturally pairs well with many flavors in baked goods that ginger pairs well with. Moreover, cinnamon is also a wonderful addition to savory recipes. Therefore, the next time you run out of ground ginger reach for the cinnamon.

Start with a ¼ teaspoon of cinnamon in place of 1 tablespoon of fresh ginger. Add more if needed.

Another spice you may already have in your pantry is nutmeg. Like cinnamon, nutmeg has similar sweet and spicy notes that resemble ginger.

Nutmeg also pairs well with both savory and baked dishes. Therefore, this can be a good flavor substitute for ginger in many dishes.

One thing to be mindful of if using nutmeg is that it does have a distinctly different taste than ginger. In addition, it can be an acquired taste. If cooking for a large group, it may be better to use a more familiar flavor (like cinnamon) as a substitute.

Begin with a ¼ teaspoon of nutmeg for 1 tablespoon of ginger. Add more as needed or desired.

Mace comes from the nutmeg tree. The same tree that gives us the nutmeg spice. In fact, it is the only tree to provide two different spices.

While mace is a spice separate from nutmeg, it does have similar flavor qualities. Therefore, it is another good alternative to ginger.

Mace is an especially good substitute for baked goods, as it is a bit sweeter than its sister spice nutmeg. Although, it can still be used to enhance the taste of savory dishes.

Milder than nutmeg, ground mace can be used in a 1:1 exchange for fresh ginger. If you are not sure how it will pair with your dish though, begin by using less and add more if desired.

If you are a fan of curry, then you are probably familiar with turmeric. Turmeric is a widely used spice that originates from Asia, just like ginger.

While ginger and turmeric are both used in Asian cuisine and have a warm flavor profile, there are some key differences. Turmeric is more bitter. It is also missing the spice that is common in ginger.

Compared to other spice substitutes, turmeric will provide one of the biggest flavor changes from the originally intended ginger. However, it can be a delightful flavor exchange in many savory dishes. Its vibrant yellow color will also impact the look of your dish.

Since turmeric has a milder flavor than ginger, it can be used in a simple 1:1 exchange as a substitute.

Ground cardamom is a spice that comes from grinding up cardamon pods. With a nice balance of sweet and savory, this spice is another fun alternative to ginger.

Cardamon has similar uses to turmeric and ginger in Southeast Asian cooking. It is widely used in curries, stews, and even baked goods.

As with any other alternative spice, cardamon will change the overall flavor. Therefore, begin with about ½ of a teaspoon in place of 1 tablespoon of fresh ginger. Then add more as needed to reach your desired taste.

Widely known as a diet supplement, ginseng is another type of root that comes from Asia. While it is easy to find in pill form in the vitamin aisle, it is less common to find in the vegetable aisle.

However, if you have an Asian market or specialty health store nearby, you may be able to find fresh ginseng root. Ginseng has a similar flavor profile to ginger and is an excellent substitution.

If you find fresh ginseng, use it in an equal 1:1 exchange for ginger root.

The Best Substitutes for Dried Ginger

Use the following dried spices from above in an equal 1:1 exchange for dried ginger in the same recipes you would use them to replace fresh ginger (sweet, savory, or both).

Give one of these easy ginger substitutes a try and let us know how well it worked for you by leaving a comment down below! 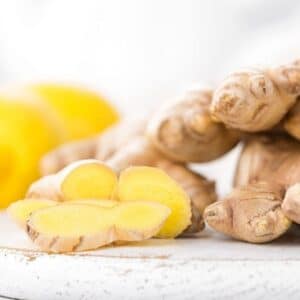 Print Recipe Leave A Comment
Love This Recipe?Click On A Star To Rate It!
5 from 5 reviews

If you're looking for the best ginger substitute, there ate plenty of easy options to choose from depending on your dish! Whether you are making something sweet or savory, don't skip the ginger- just try one of these simple alternatives!
Author | Angela
Servings: 1 serving
Calories: 6kcal
Prep 2 minutes
Cooking 0 minutes
Total Time 2 minutes
Pin Recipe Share on Facebook

Nutrition is calculated for the frozen (fresh) ginger only.