A great gathering of Sesame Oil Substitute ideas to suit your cooking and baking needs! From similar cooking oils with high smoke points to the best alternatives for that awesome nutty sesame seed oil flavor!

Sesame oil is an integral part of Asian cooking, imparting its distinctive flavor to so many of our favorite dishes! Sesame seed oil is used in my hibachi cooking oil blend to make all of these easy hibachi recipes at home, as well as any great stir-fry, fried rice, sesame chicken, and many, many more recipes!

With the shortages due to the events of the last year, this is one item that I could not find on the shelves at my local grocery stores. I was very patient, then I got impatient and started testing alternatives!

What's the Difference Between Sesame Oil and Sesame Seed Oil

Are they the same thing? Yes and no! Both are made from sesame seeds. The really confusing thing to note is that the two varieties are sometimes labeled interchangeably!

Generally speaking, 'sesame oil' is the light variety of sesame seed oil noted below. 'Sesame seed oil' is the darker variety that you find in smaller bottles in the store. Search for either online in the shopping tab and both of the searches will bring up the same sesame seed-based oil results.

Sesame oil is sold in multiple forms but the most common are dark and light oils.

I have compiled a list of the best ideas for alternatives for sesame oil below. The list is broken down into two sections, based on whether you need light sesame oil for cooking or looking for a comparable flavor substitution.

The consistency of olive oil is also very similar to sesame oil, making it a great match for texture. Additionally, the higher smoke point of the olive oil varieties ( other than EVOO ) makes it a perfect oil for deep-frying.

Canola oil is a great neutral-flavored oil with a similar smoke point to sesame oil. Since canola oil is a commonly used oil, there's a great chance that you already have it on hand!

Coconut oil is a great oil to use in cooking where the nutty toasted sesame seed flavor is not needed. The light coconut flavor may be slightly noticeable, but this is one of my favorite substitutions.

When cooking with MCT oil there is no flavor or odor to the oil, which makes it a great flavorless option. However, due to the low smoke point, it is only suitable for low to medium temperature cooking.

Like sunflower oil above, safflower oil is made from the seeds of the safflower plant. Safflower oil has a very mild flavor and neutral aroma which makes it ideal for baking, wok-frying, and more!

Grapeseed oil is another relatively flavor-less cooking oil that can be used as a light sesame oil alternative. It also makes a great base for your homemade sesame oil shared below.

What I love about grapeseed oil in cooking is that it works well with any flavors in your recipe. This is a great oil to use with pricier ingredients, to really let the flavors shine!

The Best Toasted Sesame Oil Alternatives Based on Flavor

This trustee chef hack is an easy sesame seed oil alternative that produces a great flavored oil and it's easy to make at home! If you have sesame seeds on hand, simply toast them in a single layer in a frying pan.

Heat ¼ cup of sesame seeds slowly over low heat, so they don't burn. Once the seeds are lightly golden and aromatic, add 1 cup of a neutral-flavored oil listed above - or my favorite, avocado oil. Continue heating over low heat for about 2 - 3 minutes, but remove from heat immediately if your sesame seeds start to brown.

For best flavor, use a hand blender and mix the oil and toasted sesame seeds then allow the oil to cool for two hours. Strain and transfer to a clean glass container or jar. Your homemade sesame oil can be stored in the refrigerator for up to two weeks.

Best Used: in any recipe that calls for toasted sesame oil.

smoke point: will vary based upon your base cooking oil.

Tahini is made from raw sesame seeds that have been soaked and then ground down into an oily paste.  Sesame seed oil is made from toasted sesame seeds, so tahini is arguably the best option for a similar taste.

If you have tahini on hand, it can also be combined with one of the neutral-flavored cooking oils mentioned above. In combination, the tahini and oil work very much like sesame oil in sautéed or stir-fried recipes.

Best Used: in dressings, recipes that will be lightly cooked, and as a finishing touch to a cooked dish.

The perilla seeds produce an oil that has its own unique, nutty, earthy flavor. Additionally, perilla oil also has a hint of licorice flavor similar to anise but still has a 'sesame' aroma.

Perilla oil is a commonly used ingredient in Korean cuisine. You can buy perilla oil at specialty ethnic stores or Asian markets.

Best Used: in dressings and for sautéing.

Lightly toast sesame seeds in a non-stick skillet over low heat until golden and aromatic. Sprinkle into stir-fried recipes or use as a garnish when serving to add that perfectly matched sesame oil flavor.

Best Used: as a last-minute addition or garnish.

The low smoke point of walnut oil means it is less suitable to using for sautéing or stir-frying and best used as a finishing touch. High heat will change the flavor of the walnut oil, and potentially make your foods bitter.

Best Used: in marinades, uncooked sauce, salad dressings, and as a flavor addition to finished dishes.

The consistency of olive oil is very similar to sesame oil, making it a great match for texture. The olive oil will also bind your recipe in the same manner that sesame seed oil would.

While avocado oil doesn't add the characteristic nutty, toasted sesame flavor in cooking it does add a delightfully rich taste. It's a wonderful sesame oil substitution to use where the richness and texture need to be matched, rather than flavor.

The chef hack mentioned above in the DIY sesame oil recommends a neutral oil base. Use whatever neutral-flavored oil that you have readily available to you. However, if you happen to have avocado oil or want the very best homemade sesame seed oil, do use this oil as your base!

Peanut oil is a great oil to use as a sesame oil substitute. It has a high smoke point that makes it a highly suitable choice for wok-frying. This is the best choice among oils to use for stir-fry recipes.

Plus, the inherent nutty flavor in peanuts comes through in this affordable cooking oil. This mild, but rich and nutty flavored oil is commonly used in Asian cooking alongside sesame oil!

If you want to add some nuttiness to your recipe, but don't have sesame seeds or other sesame oil alternatives on hand, peanuts are a great addition. Toasted or plain, roughly chopped peanuts can be added to stir-fry dishes and your favorite Asian recipes for an easy flavor enhancement!

Best Used: as a last-minute addition to stir-fry dinners or as a garnish.

Almond oil has its own distinctive flavor that while not the same as dark sesame oil, is still a great flavor addition to Asian cooking. The high smoke point means that this oil is well-suited for wok-frying and stir-fry recipes.

Other nut oils like hazelnut or macadamia nut oil are also good flavor alternatives. However, they are high-cost oils that are best suited to adding to dishes as a finishing touch. Their rich, creamy texture makes these oils ideal for dressings as well.

Butter does not have the characteristic sesame seed flavor, but it can be stirred into dishes at the end of the cooking process to add a rich, creamy texture that tastes amazing. Your butter can also be browned before using to add a much deeper and intensely rich flavor with hints of nuttiness.

Due to the high smoke point of ghee, or clarified butter, you can use the ghee at any point in the cooking process. It adds a light buttery richness to your dishes without burning like butter is apt to do. 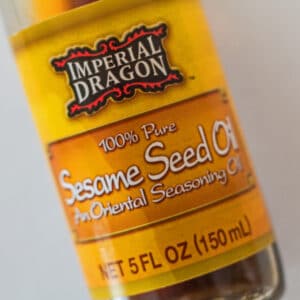 Print Recipe Leave A Comment
Love This Recipe?Click On A Star To Rate It!
5 from 2 votes

Note: Use any of the options above in a 1:1 ratio. Equal portions of cooking oil alternatives for the sesame oil called for in a recipe, except where noted above.
Did you try this recipe? Rate it below!I can’t wait to see your results! Mention @bake_it_with_love or tag #bake_it_with_love!
Course Substitutions
Cuisine American