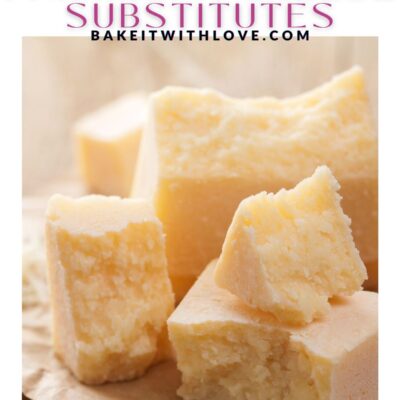 Grated on top of pasta or stirred into a creamy Parmesan risotto, Parmesan cheese is the final touch of flavor that makes a meal. This hard cheese hails from Italy and has a rich flavor that is often referred to as nutty.

This rich flavor comes from being aged. The longer the Parmesan cheese ages, the richer the flavor. Some types of Parmesan are aged up to 36 months! However, the standard is often 12-18 months.

Understanding how Parmesan gets its flavor is helpful when considering what type of substitute to use.

The best substitutes for Parmesan cheese will have a similar rich flavor. This is found in other cheeses that have gone through a similar aging process.

In addition to choosing a cheese that has a similar flavor, consider the texture of the cheese. Another hard cheese will have the closest texture to Parmesan. However, some softer cheeses will have a more desirable flavor. Moreover, some cheeses will not melt the same as Parmesan.

Therefore, consider which cheese will best complement your recipe. Whether that is a strong nutty flavor to grate on top of pasta or cheese that will melt into your pasta with a rich creamy consistency.

The strong flavor of asiago pairs well with most foods that are cooked alongside Parmesan. Moreover, the soft texture of asiago melts into a delightful gooey cheese that is perfect for mixing into sauces, pasta, and risottos.

Most people will find that a 1:1 ratio is perfect when substituting asiago for Parmesan. If you are worried about the flavor being too strong though, begin with half and add more slowly.

Another Italian cheese to look for as a substitute is Pecorino Romano. Pecorino Romano has a similar consistency to parmesan which makes it great for grating onto salads or pasta.

In contrast to Parmesan which is made from cow’s milk, Pecorino Romano is made from sheep’s milk. Therefore, while it shares the same nutty undertones found in Parmesan, it has a stronger overall flavor. In addition, you’ll notice a bit of tanginess to it.

To avoid overpowering your recipe, begin with ½ the amount your recipe calls for. Add more if needed to reach the right flavor.

While Pecorino Romano is made in Italy, Romano cheese is often the American version. This version of the Italian cheese is usually made from cow’s milk. This results in a softer overall flavor compared to Pecorino Romano.

Even though it is a milder version of Italian cheese, Romano cheese is still stronger than Parmesan. It provides a sharper and saltier flavor. While a bit sharper, you will still notice a nutty base that has a similar taste to Parmesan.

As with Pecorino Romano, start with ½ the amount your recipe calls for and add more as desired.

A lesser-known Italian cheese is Grana Padano. Grana Padano is aged for at least 9 months, resulting in a rich savory flavor that resembles Parmesan. Moreover, this hard cheese has a similar crumbly texture.

Grana Padano is probably not a cheese you have on hand when you need a last-minute substitute. However, if you are looking to try a new cheese that has a similar strong nutty flavor to Parmesan – this is a great one to explore.

Use Grana Padano in a 1:1 ratio for Parmesan in any recipe.

Piave is made from cow’s milk that is gathered in the Dolomite region of Italy. With a protected Designation of Origin – Piave must come from this area to be recognized as true Piave cheese.

It has the same nutty undertones of Parmesan with an additional fruity finish. Like Grana Padano, this is probably not one you have on hand. If you want a new take on some traditional recipes though, try swapping out your Parmesan for this elevated option.

Piave can be used in a 1:1 ratio for Parmesan.

It is up for debate on whether mozzarella or Parmesan is more beloved of the Italian cheeses. Regardless, for many people - mozzarella is at least either number one or two.

Compared to Parmesan (and other Italian cheeses) mozzarella is much milder. It also has a distinctly different texture compared to many of the hard cheeses. Despite these differences, mozzarella is a great substitute in many dishes.

Mozzarella melts beautifully and will provide a rich creamy and cheesy base for pasta sauces and risottos. Moreover, it can be grated on top of salads and pasta as a final addition.

Start with a 1:1 substitution of mozzarella for Parmesan. Since mozzarella is milder, you may want to add more cheese and a dash of salt to reach the desired taste.

Italy isn’t the only country to produce rich savory cheeses. In Spain, Manchego is like the Spanish version of Parmesan cheese. It is popularly used in eggs or grated on top of salads.

While Manchego resembles Parmesan in many ways, its overall flavor is milder than Parmesan. This makes it an easy substitute that will not overpower other flavors in a recipe.

Manchego is a great choice to replace Parmesan with a softer flavor. It can be used in any dish – grated on top or mixed in to create a creamy consistency. Start with a 1:1 ratio and add more if needed.

If you want a substitute for Parmesan that is low-fat, consider Sap Sago cheese. Made in Switzerland, this is a hard cheese that is predominantly used for grating. This makes it a great low-fat choice for replacing grated Parmesan in any dish.

Often compared to gruyere, sap sago has a nutty flavor that will lend a similar flavor to Parmesan. However, sap sago is quite a pungent cheese. Therefore, give it a little taste test first before using it in your recipe.

Due to its pungent and distinct taste, start with about half of what your recipe calls for. Then add more as desired.

While Italian food gets Parmesan, Mexican food gets cotija. Some say that cotija is the “Mexican Parmesan.” However, while it is used similarly to Parmesan cheese, there are some distinct differences.

Cotija is softer and sharper than Parmesan cheese. It is also much saltier. Moreover, it also does not melt the same way Parmesan does. Therefore, when using it as a substitute for Parmesan be mindful that it will provide a new flavor profile.

To swap out Parmesan for cotija, use a 1:1 ratio for dishes that call for a grated Parmesan as a topping or mixed into a salad.

Even though cheddar cheese does not taste like Parmesan, it is an easy and tasty substitute in a pinch.

While cheddar will add a new flavor spin on your dish, it is easy to use grated and it melts beautifully! Therefore, it can be used in the same way Parmesan is used in any recipe. Grate it, toss it in a salad, or stir it into a risotto or pasta.

Use cheddar cheese in an easy 1:1 substitution for Parmesan.

If you love Parmesan, but not dairy, then look for soy Parmesan. Soy Parmesan is a vegan alternative to Parmesan cheese that can often be used in the same way.

While the taste of soy Parmesan will resemble the saltiness of Parmesan, the flavor may not be as rich as regular Parmesan. Moreover, the texture of soy may shift the consistency of your final dish.  This may be most notable when melting the cheese.

Use Parmesan soy in a 1:1 replacement or as suggested on the package.

If you follow a vegan diet, then you probably already know about the magic of nutritional yeast. This condiment is a common replacement for cheese in many vegan dishes.

While it is not an exact replacement for Parmesan, it will provide a wonderful nutty flavor and elevate any dish. It will not provide a creamy melted cheese replacement on its own. However, when added to a non-dairy milky base it will create a cheese-like sauce.

To avoid overpowering your recipe, start with a small amount of nutritional yeast and then add more to reach your desired taste.

Can I use Parmesan in a Can?

Fresh Parmesan will provide the rich nutty flavor your recipe is aiming for. Moreover, it will melt into the desired consistency if added to pasta or risotto.

So, what about the Parmesan that is sold in a canister or shake-able bottle? Kraft is most often associated with this easy and convenient form of Parmesan cheese in a green shaker container. More salty than cheesy, this is often used as a condiment to add on top of pizza and pasta.

While the consistency is not right to produce a savory and creamy sauce, it can do work as a topping. However, when looking for a replacement with more flavor and desired texture – reach for a substitute from above.

Any of these delicious cheeses would make an easy Parmesan cheese substitute! Tell us how you replaced Parmesan in a recipe and which alternative worked for you! 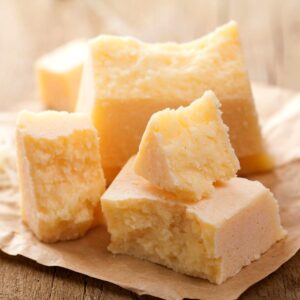 *Nutritional information is calculated for the Asiago cheese only.