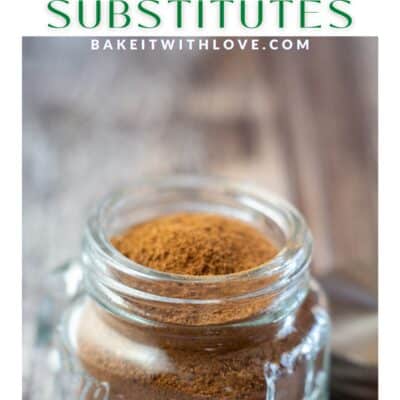 Whether you are making a classic apple pie, a moist spice cake, or a warm cup of apple cider – you don’t want to miss out on the full flavor just because you are out of apple pie spice.

You have probably come across this tasty flavor in an apple spiced doughnut, spice cake, or traditional apple pie. It is truly the perfect addition to any apple-based treat. However, since apple desserts are not made year-round in many homes you may find you don’t keep apple pie spice on hand.

Thankfully, when it comes to finding an apple pie spice substitute there are a handful of great choices!

What is Apple Pie Spice?

Apple pie spice is a blend of three spices: cinnamon, nutmeg, and allspice. This simple blend of spices creates a complex flavor that is associated with many favorite fall treats.

With only three ingredients, it is one of the easiest blends to make! If you know you have cinnamon, nutmeg, and allspice in your cupboard jump to the bottom for a quick and easy recipe to make your apple pie substitute. You can also keep reading to find 7 other great apple pie spice substitutes.

The rich warm flavor of cinnamon is one of the main aromas and flavors of fall. It is also the main spice in the apple pie spice blend. Therefore, it is the best single spice to use as a substitute apple pie spice.

Moreover, cinnamon is one of the most common spices. It is likely that you already have this spice in your cupboard and can grab it for a quick substitute.

If you want a stronger flavor, you can add more as desired. However, taste along the way to make sure you don’t use too much.

Allspice sounds like a blend of several spices, but it is only one spice. This unique spice presents the flavors of cinnamon, nutmeg, and ginger. It also has a bit of a peppery taste.

Due to its complex flavor, allspice is quite pungent. To avoid overpowering your recipe, use ⅓ of the measurement your recipe calls for (⅓ teaspoon allspice = 1 teaspoon apple pie spice). You can even start with only a ¼ measurement if want a softer flavor.

Nutmeg is the third spice in apple pie spice. It is a familiar flavor that is found in many holiday treats.

However, when used on its own it is often in very small quantities. Think about a dash of nutmeg on top of a cup of hot cocoa or chilled eggnog.

If nutmeg is the only spice you have available, you can use it as a substitute for apple pie spice. A little goes a long way though, so be mindful that you only use a little.

While nutmeg can be overpowering on its own it is wonderful paired with cinnamon. Therefore, if you have both nutmeg and cinnamon available – use them together.

Since these two spices make up two-thirds of the blend for apple pie spice they will give you the closest flavor.

There are two main flavors of fall: pumpkin and apple. While they are not the same, they have many similarities. Especially when it comes to the spices used to enhance the flavor of pumpkin and apple recipes.

Pumpkin pie spice is made with the same ingredients that make up apple pie spice: cinnamon, nutmeg, and allspice. However, pumpkin pie spice also includes cloves, ginger, and sometimes cardamon.

The addition of cloves is the main flavor to consider if using pumpkin pie spice to replace apple pie spice. Cloves have a distinct flavor that will shift the overall flavor a bit. The warmth of the cloves will still pair nicely with many apple recipes though – such as a spice cake.

Chinese 5 spice is a blend that is used in Chinese and Vietnamese cuisine. It is less common to have at home, but if you happen to have this in your cupboard it can be a good substitute for apple pie spice.

These two new ingredients add a bit more bite to the spice blend. However, in desserts with a rich warm flavor (like spice cake) this substitute can work well.

If you have both cinnamon and Chinese 5 spice consider mixing them together. The Chinese 5 spice will add a complex flavor profile like apple pie spice. The addition of cinnamon will balance out the star anise and Sichuan pepper. The result is a flavor more like fall.

If you only want to have a more traditional flavor, use only a little bit of the Chinese 5 Spice: ¾ teaspoons cinnamon + ¼ teaspoon Chinese 5 spice.

When it comes to spice blends, apple pie spice is one of the easiest to make at home! If you have cinnamon, nutmeg, and allspice you can mix up a batch in a few minutes.

The great thing about making your own spice blend at home is that you can adjust the flavor to your liking. If you prefer more cinnamon, increase it to 3 tablespoons (or only use ½ to ¾ tablespoons of nutmeg and allspice).

Add all spices to a bowl and stir together. Keep any extra in an airtight container for next time.

Now you know exactly what to do the next time your run out of apple pie spice! Let us know if you gave any of these easy apple pie spice substitutes a try in the comment section below!