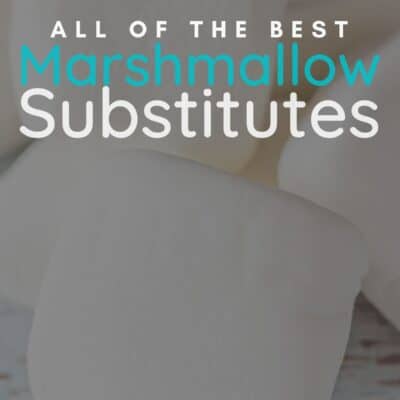 The sugary substance that binds a rather bland cereal and makes a delicious gooey treat. The white little puffs that top a cup of hot cocoa. The large cloud-like confections slide perfectly onto a stick to roast over a campfire.

Whatever your favorite way to use these ooey-gooey clouds of delight, many favorite treats wouldn’t be the same – or even possible – without marshmallows.

Today’s marshmallows are made from a wonderful concoction of sugar, corn syrup, corn starch, and gelatin. If you want to get fancy, they can also include food coloring and even flavoring.

While it seems like these little sugary delights are the invention of the 1950s, they have been around a bit longer. As long as Ancient Egypt to be exact.

The original marshmallows that go as far back as Ancient Egypt are how the name of this food came to be. Before the convenience of corn syrup and other modern confections, marshmallows were made from the mallow plant.

The nectar of the mallow plant was mixed with honey to create an ancient sweet treat that resembles today’s modern mallow.

Finding Your Best Substitute for Marshmallows

Even if you love marshmallows there are plenty of reasons you may need a substitute. You may just be out of marshmallows and have a late-night hankering for a sweet treat. In this case, you can get creative with ingredients around the house (even ones that taste nothing like marshmallows).

On the other hand, you may have realized these squishy little treats don’t match your new vegan diet. Moreover, you may simply want something with a bit less sugar and corn syrup.  Great news! There are vegan-friendly and sugar-free marshmallows!

While not quite as old as marshmallows, marshmallow fluff has been around for over 100 years!

It is made from many of the same ingredients as marshmallows such as sugar and corn syrup. In addition, it is made with vanilla extract and egg whites. The whipped egg whites are what give it a fluffy and airy texture (they also mean it is not a vegan food).

The fluffy texture of marshmallow fluff is great for replacing melted marshmallows in recipes. It can be used in Rice Krispy treats, on top of coca, and mixed into different desserts.

Replace 1 cup of marshmallows (or 8 large mallows) with ½ cup of fluff.

Marshmallow cream is not as popular as marshmallow fluff. It has many similarities though and is an equally wonderful substitute for marshmallows.

Made from corn syrup, sugar, and egg whites it has the same base as fluff. The main difference is the addition of cream of tartar and xanthan gum. These two ingredients change the consistency.

Sugar-free marshmallows are made by replacing the sugar and corn syrup with several sugar-free alternatives. These provide a similar sweetness to the real thing. However, the alternative sweeteners do not melt the same way as regular sugar.

There are pros and cons to these not melting well. Pro, they are great for making s’mores because they will stay on the roasting stick! Con, they don’t melt the way you need for Rice Krispie treats.

The gelatin used to make marshmallows is an animal by-product. Therefore, not a vegan ingredient. Thankfully, there is a plant-based substitute for gelatin that works just as well.

Agar-agar comes from seaweed and has the same texture and consistency as gelatin. In fact, it is commonly used to make vegan homemade vegan Jell-O.

Vegan marshmallows may be harder to find in mainstream grocery stores. However, they are easily available at most health food stores or online.

Zephyrs are basically the Russian equivalent of a marshmallow. So, they are less likely to be the substitute you have at home right now.

If you want to try a new type of marshmallow though, these sweet confections from Russia are a wonderful substitute.

They are made from egg whites, sugar, apple puree, and gelatin. The apple puree acts as a sweet binding agent like the corn syrup in marshmallows. The result is a delightful treat that has a similar flavor and texture to marshmallows.

Zephyrs can be used in a 1:1 exchange for marshmallows in any recipe.

No, honey and peanut butter do not taste like marshmallows. However, they are a rich and creamy combination that can replace the sweetness of marshmallows. Moreover, when heated up these two ingredients create a similar chewy consistency to melted marshmallows.

(The above measurements will replace the marshmallows in the classic Rice Krispies Treat recipe).

Place the honey in a saucepan and bring to a boil. Lower the heat and let it simmer until it becomes a thinner consistency. Turn off the heat and add peanut butter and salt. Stir well.

It is important to heat the honey! Don’t just mix them together like a peanut butter and honey sandwich. The heating helps create the chewy consistency. Yum!

Like the mixture above you can add chocolate to create a fun new flavor. This mixture (and the one above) can be used to bind many ingredients that marshmallows were needed for.

Add the honey to a saucepan and bring to a boil. Lower the heat and allow it to simmer. Before removing it from the heat, add the chocolate and stir until it melts. Then remove from heat and add peanut butter and salt.

Another option is to follow the original peanut butter + honey directions and then melt the chocolate on its own and spread on top as a chocolate topping.

Nutella is sweeter than peanut butter so you may want to use ¼ cup honey + ¾ cup Nutella.

While peanut butter, chocolate, and other nut butters have Rice Krispie treats covered – what about s’mores?

S’mores are a favorite for many families. If you don’t want to eat marshmallows though, you may feel left out of the fun. Rather than miss out just grab your favorite fruit to grill!

Peaches, pineapple, and strawberries are all delicious when grilled! Skewer your favorite fruit and hold it over the fire until it gets juicy. Then add it to your graham cracker with a piece of chocolate. Grilled fruit is also tasty on its own.

This substitute is a bit of a flavor change. It adds a savory element to everyone’s favorite campfire treat.

Brie is a lovely soft cheese that has a wonderful rich flavor when cooked. It is often paired with apples and other fruits as the perfect sweet and savory combo.

If you want to replace the chocolate and marshmallows around the fire, cut up some pieces of brie. You can easily grill big chunks of brie and then eat on a cut-up apple (or other favorite fruit).

For a savory s’more, simply replace the marshmallow with the brie and keep the graham cracker and chocolate.

Cream cheese and sweetened condensed milk are no strangers to the dessert world. these two ingredients are often used to create rich and creamy fillings and toppings. When mixed, they form a new creamy goodness called “cheese cream.”

Cheese cream is a great choice for when you need to find a marshmallow filling replacement. It can also be used as a marshmallow topping.

The ratio will vary depending on the recipe you are making. In many recipes, you will be able to use a 1:1 ratio of cheese cream to replace melted marshmallows or marshmallow cream.

In addition to cheese cream, other creamy confections can also be used to replace marshmallow cream or filling.

If you are not in a hurry and want the real deal, consider making your own marshmallow fluff! While it is not difficult to make, keep in mind that it does not have the same structure as a traditional marshmallow.

How To Make Homemade Marshmallow Fluff

Choose a marshmallow substitute from this list and you will be whipping up sweet treats in no time! Tell us which substitute worked best in your recipe by leaving us a comment below! 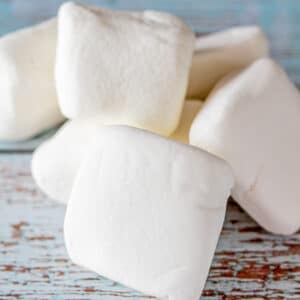 You never know when a marshmallow substitute will come in handy while baking, so I have listed all of the top marshmallow alternatives! When you're craving something sweet you don't have to run to the store, these easy marshmallow substitutes will work in all of your favorite dessert recipes!
Author | Angela
Servings: 6 servings
Calories: 230kcal
Prep 10 minutes
Cooking 20 minutes
Total Time 30 minutes
Pin Recipe Share on Facebook