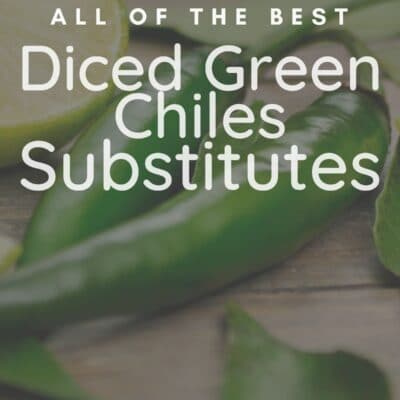 For the best green chiles substitute options, take a look at this list of peppers that will work wonderfully in their place! Whether you like your peppers hot and spicy or prefer to stick to the milder side, there are plenty of options all over the spectrum. There is sure to be an easy green chile substitute to suit your needs!

Green chiles are an important part of dishes around the world. They are particularly important to the overall flavor of many dishes from Mexico and other countries in South America.

While green chiles offer some spiciness, they are milder compared to other types of chiles. However, they still may be too spicy for some people. This may be a reason you are looking for a substitute.

Rather than leaving these green chiles out, opt for a milder pepper. On the other hand, if you find green chiles are not quite hot enough, reach for something with a bit more heat.

If you find you just ran out of fresh and/or diced green chiles then you take your pick from any of these substitutes below. All will add flavor. Some will add a bit of heat. A few will provide a new rich flavor. Whatever you need – there’s a choice for you!

Most of these green chiles and diced green chiles substitutes utilize fresh peppers that can easily be swapped in an equal amount for your green chiles!

The mildest of all the peppers, green bell peppers are a good choice when you want to reduce the spiciness of a dish.

While green bell peppers will add color and texture to a cooked dish, they will not add a lot of flavor. Therefore, they are not suited to replace green chiles in soups or sauces that get their flavor from the chiles.

Green bell peppers are best used in dishes where they add color, texture, and a mild flavor. Start with a 1:1 ratio. Add more if desired.

If you want a mild pepper that still offers a lot of flavor, then banana peppers are a great choice. These peppers have a bright yellow color (although they are sometimes green). They offer a mild spiciness with a bit of a tang and sweetness.

Banana peppers are sold fresh and pickled. The fresh version will be closest in flavor to green chiles. Pickled banana peppers will offer a more acidic and tangy taste but can still work in certain recipes.

Use banana peppers in a 1:1 substitution for green chiles. They are best suited for recipes that call for chopped green chiles.

Anaheim peppers are another pepper on the milder side of spicy. Unlike banana peppers that have added tanginess and sweetness, Anaheim peppers have a crisper pepper flavor.

These versatile peppers can be used in any dish – hot or cold. While on the lower end of the spicy scale, their flavor still holds up well when cooked. Therefore, they are a great choice to use in sauces and soups.

Anaheim peppers can be used in a 1:1 ratio in any recipe that calls for green chiles.

Moving up in heat and size we have the poblano pepper. Poblano peppers are one step up from Anaheim peppers. They have a mild to medium heat that will add a bit of kick to your dish, but not overdo it.

The rich flavor of these peppers includes a hint of smokiness. This smoky flavor comes out even more during cooking.

Poblano peppers are best used cooked. The outside skin of poblano peppers does not have a great flavor. It is also more difficult to digest. If you want to use them chopped up in a cold dish, quickly roast the outside of the pepper in a skillet to soften up the skin.

Use poblano peppers in a 1:1 substitution in any recipe that you want to give rich smoky and spicy flavor.

If your goal is a final flavor with a big kick of spice – reach for some jalapeno peppers. These small green peppers are one of the closest in flavor to green chiles. You just need to find the right amount of heat (without overdoing it).

The heat from these peppers is primarily found in the seeds. Therefore, you have a lot of flexibility in how spicy you want to make a dish.

When using fresh jalapenos, slice them open and remove the seeds. Set the seeds to the side. Add the chopped pepper in a 1:1 exchange for green chiles. Then, slowly add the seeds. Taste your dish along the way until you reach the right level of spiciness.

Pickled jalapenos can be used as well; however, they will offer a tangier taste.

Green Fresno peppers (or Fresno chili peppers) are sometimes mistaken for jalapeno peppers. They look almost identical. They also have a similar flavor.

If you want to elevate the heat of your overall recipe you can use a 1:1 substitution of Green Fresno peppers for green chiles. However, if you don’t want to overdo the spice factor, start with ¾ to ½ less.

When it comes to spiciness, the serrano pepper is at the top of the heat index. Like the Green Fresno pepper, it also looks a lot like a jalapeno. They can also be used in cooked or cold dishes the same way.

In addition, serrano peppers require a bit of extra attention. These peppers are not only spicy when eaten. The skin of a serrano pepper produces an oil that is just as peppery. Be mindful of this when washing and chopping them.

Serrano peppers come in a variety of colors. If the color green is not specific to your recipe, you can use any color of serrano pepper.

Due to the sharp flavor and heat of serrano peppers, start with a small amount. Even as little as a ¼ the of what recipe calls for. It is better to slowly add serrano peppers than to overdo it.

If you are ready for a pick kick of heat, then you can pick up some small Thai chili peppers. Thai chili peppers are on the smaller side, but don’t let that fool you. They are extremely hot, and a little bit goes a long way!

Most red peppers are the fully ripened form of other chili peppers (such as the Green Fresno pepper). Therefore, they are often spicier than the younger version of green peppers. However, some red peppers will have a milder and sweeter flavor.

Pasilla peppers are dried peppers. However, they are used in the same way that fresh peppers are used.

They are primarily used to add flavor to cooked dishes. They pair especially well with meat and fish.

With a mild to hot flavor that is slightly sweet, they work well as a substitute for green chiles in sauces. Use them in a 1:1 exchange.

Did you know that the cayenne pepper in your spice cabinet comes from fresh red pepper?

Fresh cayenne peppers are small, long, red peppers. While they don’t smell hot, they have a big kick!  This comes from the seeds (much like jalapeno peppers). Therefore, you want to be mindful of not adding too much at once.

Use chopped cayenne pepper in place of green chiles in dishes you want to add a spicy kick. Start with a small amount and add more if needed.

If you don’t have green chiles or fresh cayenne peppers on hand, dried cayenne pepper is a great substitute. It will add a smoky and spicy kick to soups and sauces.

Use ⅛ teaspoon in place of 1 chopped green chile.

Ancho Cilis have a distinctly different flavor than green chiles. They offer a rich and smoky flavor that is commonly used in making mole, or other sauces.

While they will shift the flavor of your recipe, they are a good choice for a new flavor. Since they are mild and will replace the flavor of the green chiles, you can use ancho chilies in a 1:1 exchange. that is mild and smoky.

Chili powder is a blend of several seasonings. The main ingredient is ancho chiles. Chile powder has a mild and sweet heat that is commonly found in Tex-Mex food. It is also the staple seasoning in chili.

Like ancho chilis, it will change the flavor of your dish. However, since chili powder is a common ingredient to have at home it is a good substitute in a pinch.

Use ½ teaspoon of chili powder to replace 1 green chile.

Any one of these peppers can be swapped for green chiles in a recipe. The best green chile substitute depends on how hot you like your food and the overall flavor profile you are going for! 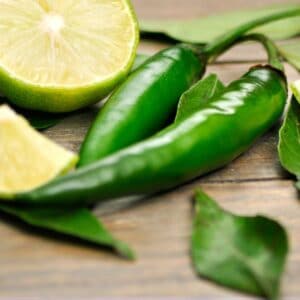 For the best green chiles substitute options, take a look at this list of peppers that will work wonderfully in their place! Whether you like your peppers hot and spicy or prefer to stick to the milder side, there are plenty of options all over the spectrum. There is sure to be an easy green chile substitute to suit your needs!
Author | Angela
Servings: 1 serving
Calories: 15kcal
Prep 2 minutes
Cooking 0 minutes
Total Time 2 minutes
Pin Recipe Share on Facebook

*Nutritional information is calculated for the green bell peppers only.