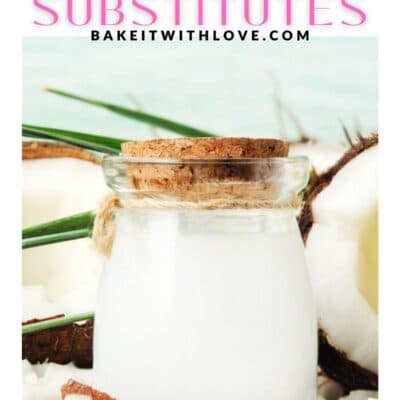 A great coconut oil substitute isn't hard to find, in fact, I've found several easy options that would work well whether cooking or baking! If you have a coconut allergy, you ran out of coconut oil, or you just don't like the taste, there are many alternatives that can work in its place! Take a look at this list and find which coconut oil substitute will work best for you!

Coconuts have become quite popular in recent years. When it comes to substitutes, coconut products are at the top of the list of best options. Need to make a dairy-free drink or dessert? Reach for coconut milk. Making a gluten-free or low-carb treat? Grab a bag of coconut flour!

In addition to coconut flour, coconut milk, and coconut cream – coconut oil is at the top of the list of favorite healthy fat alternatives.

While coconut oil has become its own substitute, sometimes you may need a substitute for coconut oil! We have all had those days when we run out of our favorite ingredient. Moreover, you may be in the group that has not succumbed to the coconut craze!

Whether you are out of your favorite coconut oil or chose to avoid the coconut bandwagon, there are plenty of delicious alternatives to this popular ingredient.

The Best Substitutes for Coconut Oil

When it comes to finding the best substitute, you want something that will provide a similar flavor and texture. Unfortunately, no substitute has the same flavor as coconut oil.

Fortunately, there are several that have the same consistency! Moreover, almost all these wonderful substitutes can be used in both cooking and baking.

Long before coconut oil got popular, olive oil was the healthy fat of choice. In fact, many cooks started swapping out their olive oil for coconut oil.

With a similar consistency and cooking properties, it is an easy substitute. However, olive oil has the same issue that some find with coconut oil. Its taste.

Olive oil has a mild, but distinct, flavor. This flavor enhances the savory taste of many recipes though. It can even be used for a savory take on baked goods – like a lemon cake. It is also an excellent substitute for dressings and marinades.

Use in 1:1 ratio for coconut oil in any recipe.

Before olive oil and coconut oil – butter was the go-to! Butter is an amazing fat for both baking and cooking when you want to enrich the flavor. Who doesn’t love that rich buttery taste?

Moreover, butter helps enrich the creamy texture of sauces. It also elevates the texture of baked goods by adding moisture.

Butter is also a great substitute for coconut oil because it can be used in the same solid or liquid form. Replace coconut oil with a 1:1 ratio of butter.

*Keep in mind that butter has a higher water content than other oil replacements, you may get a slightly different texture when cooking with butter vs coconut oil.

The real original in cooking fat is lard. Before butter, oil, and shortening, lard was the main choice for cooking, roasting, frying, and baking!

While it has diminished in popularity, it is still one of the best all-around cooking fats. Its neutral taste makes it easy to use as a substitute in any recipe. Like butter, it can also be used to replace coconut oil in a solid or liquid form.

Use lard in a 1:1 ratio for coconut oil in cooking and baking.

Beef tallow is like lard except that the fat is derived from cows instead of pigs. Although it comes from a different animal, beef tallow has the same properties as lard.

It has a neutral flavor that can be used in cooking and baking. Moreover, it has a high smoke point for frying. However, it will not lend itself to being used in dressings or marinades.

Can be used in solid form or melted in a 1:1 ratio for coconut oil.

Canola (or vegetable oil) is an easy substitute that many people have at home. Compared to coconut oil, it is also an inexpensive alternative.

Canola oil has a neutral flavor that is ideal as a substitute. It won’t add a new flavor or overpower any other flavors in the recipe. It also has a high smoke point that makes it ideal for baking, roasting, sauteing, and frying.

You can use this as a simple 1:1 substitution for coconut oil in any recipe.

If you want a neutral oil that is not derived from corn, then give sunflower oil a try. This oil is made from sunflower seeds and has a mild flavor that is great for cooking. With a high smoke point, it can also be used for frying.

Beyond being a great choice for savory dishes you can also use sunflower oil for baking. It is particularly great for less sweet baked goods, like quick breads and muffins.

Replace coconut oil with a 1:1 ratio of sunflower oil.

Avocados are a sneaky substitute. These creamy green superfoods are great for replacing fat in baking. It’s not just fresh avocado that is a great substitute though.

Avocado oil is a wonderful choice! The mild flavor of avocado oil is a great substitute for cooking and baking (at medium heat). It also provides a lovely base for salad dressings and marinades.

Use in an easy 1:1 swap for coconut oil.

Almonds are another food that has been adapted for various forms of cooking. Like coconuts, you can find almond milk and almond flour. You can also find almond oil!

Like coconut oil, almond oil has its own distinct flavor. This nutty flavor is great for adding a hint of almond flavor to baked goods. It can also enrich the savory elements in cooking.

Beyond the basics of cooking and baking, almond oil can be used in dressings and even for frying.

Swap out coconut oil with almond oil in a 1:1 ratio.

Grapeseed oil is making a name for itself in the world of healthy fats. Derived from the residue of grapes that have been juiced, it is a wonderful natural oil.

Even though it comes from grapes, it is not sweet. It has a mild flavor that is wonderful at taking on the other flavors around it. Therefore, it works well for dressings, marinades, baking, and cooking.

Replace the coconut oil in your recipe with an equal 1:1 ratio of grapeseed oil.

Applesauce is commonly used as a substitute for butter baking. Therefore, it can be used to replace any other fat – like coconut oil – in baking.

Applesauce will add a lot of moisture to your recipe that will support the flavor. However, since it is fat-free it will shift the overall texture. The final bread, cookie, or dessert will be much denser.

Due to the difference in consistency between coconut oil and applesauce, start with ¼ less than the recipe calls for (¾ cup applesauce in place of 1 cup of coconut oil).

If the dough or batter does not look thin enough, add the additional ¼ measurement.

While you can’t use applesauce for fat-free cooking, you can use cooking spray! Your favorite cooking spray is a great fat-free alternative to coconut oil for sautéing or roasting.

Just spray the skillet and add your veggies and meat. When roasting, place your vegetables or meat on a baking sheet and then spray the veggies and meat with the cooking spray. Toss or stir them to coat before placing them in the oven.

The great thing about coconut oil is that you can substitute it with any oil! In addition to the substitutes above, any of these additional oils can be used.

Great for baking if you want to add a soft nutty flavor to your recipe. Can also be used in cooking or for dressings, if the nutty flavor pairs well with the other ingredients. Use in a 1:1 ratio.

Hempseed oil has a distinct taste that is earthy and nutty. It provides a nice flavor change to salad dressings, sauces, and marinades. Can be used in a 1:1 ratio, but you may want to begin with less - depending on flavor preference.

Good for frying, this oil was popularly used in fast food; however, it is no longer widely used due to the rise in peanut allergies. In addition to frying, it can be used in a 1:1 ratio for regular cooking and baking.

Known for its high smoke point, this is a popular oil used in restaurants. Its neutral flavor is great for baking, roasting, and frying. Use a 1:1 ratio of safflower oil in place of coconut oil.

Commonly known as a skincare ingredient, raw shea butter can also be used in the kitchen. It has a distinct taste that is better suited to baking, but it can be used in cooking as well.

Start with half of what the recipe calls for and add more if desired.

This unique oil is popular in India, but not as widely known or used around the world. Like shea butter, it can be used for skin care and cooking. It has a unique and bitter taste that not all will enjoy.

Start with a small amount and add more if needed.

There are plenty of coconut oil substitutes on this list to choose from and we are hoping one of them is perfect for you! Don't forget to come back and let us know how your recipe turned out! 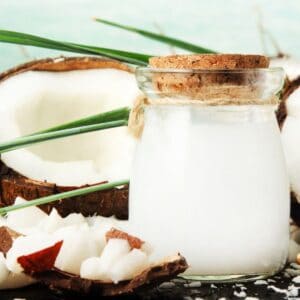 A great coconut oil substitute isn't hard to find, in fact, I've found several easy options that would work well whether cooking or baking! If you have a coconut allergy, you ran out of coconut oil, or you just don't like the taste, there are many alternatives that can work in its place! Take a look at this list and find which coconut oil substitute will work best for you!
Author | Angela
Servings: 1 serving
Calories: 124kcal
Prep 2 minutes
Cooking 0 minutes
Total Time 2 minutes
Pin Recipe Share on Facebook

*Nutritional information is calculated for olive oil (EVOO) only.