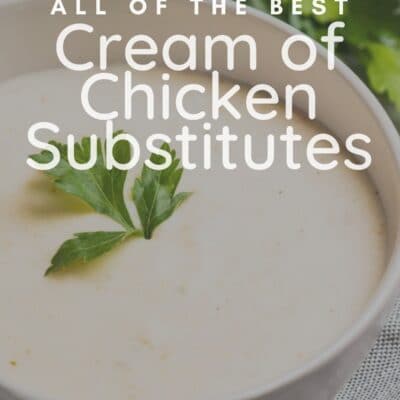 For the very best cream of chicken substitute, check out this all-inclusive list of easy swaps and alternatives that will work in any recipe! Many of these easy substitutes are common ingredients you likely have in your kitchen right now!

In the early 1930s, Campbell’s soup perfected condensed canned soups like cream of mushroom and cream of chicken. Since then, it has been a kitchen staple in many households.

This staple became the base for favorite casseroles and has even made a name for itself in dishes like creamy enchiladas. Not to mention soups and sauces. It is truly the star of many families’ favorite dishes.

Reasons You May Need a Substitute for Cream of Chicken Soup

If you have a favorite recipe that calls for cream of chicken soup, then you probably keep a can or two on hand. However, even the most prepared home chefs run into days when they are missing a key ingredient.

In addition, changes in diet can lead to the need for a substitute. While a creamy casserole made with cream of chicken soup may have been a favorite for years, dietary requirements often change.

If you or someone in your family has moved to a vegetarian or vegan diet, then cream of chicken soup is no longer an option.

Moreover, most cream of chicken soups are made with flour. Therefore, if you have a gluten intolerance then you can no longer enjoy this creamy delight.

Whether it is a simple case of forgetting to pick up more soup, or a more serious need like a dietary restrictions, there are plenty of tasty substitutes for cream of chicken soup.

Since the main reason cream of chicken soup is so popular is because of how easy it is to use, let’s first look at the other equally easy substitutes.

If you want something that provides a more exact flavor substitute though, you can go ahead and scroll to the later choices. Don’t forget to look for the vegan and gluten-free choices offered throughout.

If you’re like me, you may not have cream of chicken in the cupboard, but you do have an extra can of cream of mushroom.

Cream of mushroom soup has the same creamy texture as cream of chicken soup. The main difference being that is has a richer and earthier flavor. Many people enjoy this umami flavor though. It is also a delightful alternative to any recipe that originally calls for cream of chicken.

Due to the flour and cream used to make this soup, it is not a gluten-free or vegan-friendly option. However, it is a great choice for those who want to make a vegetarian dish.

Use cream of mushroom soup in a simple 1:1 exchange for cream of chicken soup.

Whether you are sticking with Campbell’s or have another favorite brand, there are plenty of other creamy soups beyond cream of chicken and mushroom. Any of these soups will provide the same creamy base needed for your recipe.

Most of these vegetarian options will also pair well with the other ingredients in your recipes. Especially vegetables, rice, potato, and chicken dishes. Each cream soup can also be used in an easy 1:1 exchange for cream of chicken soup.

The main difference with any of these soups will be the slight difference in taste.

Cream of celery has a lighter and brighter taste. It will create an overall lighter-tasting dish, while still offering the delicious creamy texture.

Cream of broccoli has flecks of broccoli in it but does not have a distinctly strong broccoli taste. It is a good choice for a vegetable-based soup that is still quite savory.

Cream of potato soup has a more neutral taste than other soups. It is a great choice when you don’t want to drastically change the overall taste of the dish. The potato base will simply absorb the flavors around it while providing a creamy base.

If your goal is a rich and creamy texture, then heavy cream will get you there. Heavy cream is a great vegetarian and gluten-free option since it naturally thickens when heated. Therefore, there is no need to add an extra thickener.

This will work well in most recipes where the goal of the cream of chicken soup is to create a rich creamy base. While it will not add the chicken flavor, it will absorb the other flavors around it. This makes it a great choice for those that don’t want to add additional flavors to the dish.

Use in a 1:1 substitution for cream of chicken soup.

Another tasty option that is super simple is sour cream. This is an especially yummy option for Mexican-inspired dishes like creamy chicken enchiladas.

Like heavy cream, it will not provide the chicken flavor but will take on other flavors around it. You can elevate this by adding some additional seasonings, such as garlic and onion powder. Don’t forget about the basics like salt and pepper too.

Sour cream may be too thick for an exact substation. Start with ½ cup of sour cream for every 1 cup of soup. If you feel like it is not creamy enough, add more (up to a 1:1 exchange).

Once you’ve mixed the sour cream and broth, measure it out in a 1:1 substitution for the cream of chicken soup.

If you don’t have sour cream on hand, but happen to have some plain Greek yogurt, grab that! The full-fat version will work best for the thickness.

In addition, you can mix it with a bit of chicken broth for another gluten-free substitution that still has a bit of the rich chicken flavor.

Since Greek Yogurt is quite thick, begin with ½ as much as the recipe calls for. Just like sour cream, add more if needed. If adding chicken broth, follow the same directions for sour cream above.

Prefer to buy plain yogurt over Greek yogurt? That can also work! Just make sure it is plain and unsweetened.

The consistency of yogurt will vary from brand to brand. Therefore, it is best to start with half the amount the recipe calls for in cream of chicken soup. Then add more if needed.

Speaking of adding chicken broth to other ingredients, this is also an option with heavy cream. This adds an extra step to the simple substitute mentioned earlier, but it can be worth it.

Adding chicken broth elevates the taste and brings about a richer flavor. You can even add a bit of melted butter to increase the savory flavor profile.

While not everyone keeps heavy cream in the fridge, a little bit of milk is often in the fridge. Moreover, you may have an extra can or carton of chicken broth in the pantry. Therefore, you can do a quick mixture to use as a substitute.

As with the heavy cream, mix equal parts milk and chicken broth. Whole milk or 2% will work best for consistency. You can also add butter and spices if you’d like to.

The main thing to consider if using this alternative is the thickness of the substitution. It will be quite a bit thinner than cream of chicken soup.

While this will work for many recipes, you may consider adding a thickening agent. Simply add a small amount of flour or cornstarch (to keep it gluten-free) before adding it to your recipe.

If you are already going to take the step of adding a thickening agent, you might want to go ahead and create a rich and savory white sauce to use. A white sauce is super easy to make. It also allows you to make some choices that can make it vegan and gluten-free.

This substitution is a great choice because most of us have all these things at home. Therefore, you can easily whip this up and use it as needed in your recipe.

In addition to a simple white sauce, you can add additional flavor. If you have chicken broth, use ½ cup chicken broth and ½ cup milk (instead of 1 cup milk). Add seasonings of choice at the end.

A white sauce is great for casseroles and pasta sauces. Once it is made, it can be used in a 1:1 substitution for cream of chicken soup.

If you follow a dairy-free diet, but not a vegan diet, then coconut milk and chicken broth are a good substitute for cream of chicken soup. The thickness of coconut milk provides a wonderful and rich base. The chicken broth offers the savory flavor.

One thing to remember any time you use coconut milk (or other plant-based milk) is that the overall flavor of your recipe will be altered.

While coconut milk has a distinct flavor it still pairs well with a lot of foods. This includes many foods that are found in recipes with cream of chicken soup: chicken, cheese, rice, potatoes, and vegetables.

Mix coconut milk (unsweetened and canned) with chicken broth in equal parts: ½ cup coconut milk with ½ cup broth. Measure in a 1:1 exchange for cream of chicken soup in your recipe.

If you want a fully vegan choice, use vegetable broth in place of the chicken broth.

Can I Use Chicken Broth as a Substitute?

If you have a recipe that calls for cream of chicken soup, it is most likely more for the creamy texture than the chicken flavor. Therefore, while chicken broth will give you the rich chicken taste, it is much too thin to give you a creamy texture.

You will be better off choosing one of the thick and creamy substitutes above than using chicken broth on its own.

Any of these simple cream of chicken substitute ideas will help you complete your dish and everyone will be none the wiser! Tell us all about what you're making and what substitute you chose in the comments! 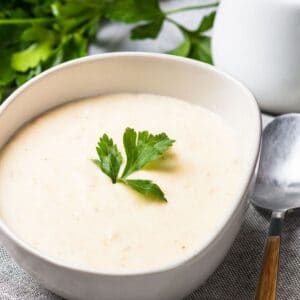 Print Recipe Leave A Comment
Love This Recipe?Click On A Star To Rate It!
5 from 8 reviews

For the very best cream of chicken substitute, check out this all-inclusive list of easy swaps and alternatives that will work in any recipe! Many of these easy substitutes are common ingredients you likely have in your kitchen right now!
Author | Angela
Servings: 4 servings
Calories: 128kcal
Prep 5 minutes
Cooking 0 minutes
Total Time 5 minutes
Pin Recipe Share on Facebook

bakeitwithlove.com/about/
« Baked Pork Tenderloin
What To Serve With Chicken Marsala »