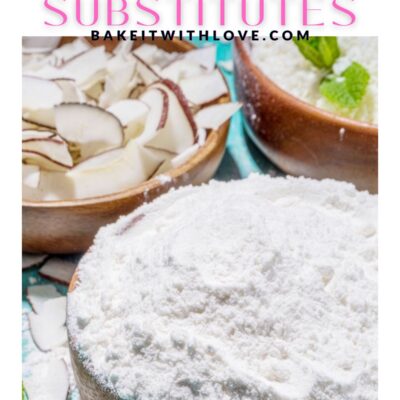 Coconut flour is made from dried coconut meat that has been ground into flour. Therefore, it has the same nutritional properties as coconut!

Coconut flour is low in carbs and high in fat. This has made it a popular ingredient in the world of low-carb and keto diet baking.

Moreover, it is gluten-free, nut-free, and soy-free! This makes coconut flour a great choice for those who have any gluten, nut, or soy allergies.

Choosing an Alternative for Coconut Flour

Coconut flour is used in a variety of ways for both baking and cooking. In baking, it can replace wheat flour to create gluten-free baked goods. In cooking, it can be used to thicken soups, sauces, and stews.

While coconut flour is versatile, it is also a very specific ingredient. Its distinctive taste and texture are difficult to match exactly. You simply will not find a substitute that is an exact replica.

However, several wonderful alternatives will offer a similar outcome!

As you search for the best substitute for your recipe, be mindful of the ratios. Coconut flour is very dense and absorbs liquid quickly. Most of the substitutes do not have these same qualities.

Therefore, you will need to use more of the substitute. You may also need to modify the amount of liquid in a recipe.

The Best Substitutes for Baking

When replacing the coconut flour in baking, you need another strong flour that will provide both taste and structure. These nine substitutes can all be used to provide a good base for your baked goods.

Except for all-purpose flour, all these substitutes are gluten-free. Many of them are also nut-free and soy-free.

Note that if you are searching for a low-carb keto option, the nut flours (and flax meal) will be your best choices

Cassava flour is a top favorite flour substitute, for coconut flour and other flours. It is made from processing dried cassava root. This is a starchy root that is like yucca.

The cassava root has a neutral flavor that transfers to the flour. The neutral taste makes it an easy substitute because it won’t greatly impact the flavor of your recipe.

However, cassava flour is higher in carbs than coconut flour. If you are looking for a low-carb keto-friendly substitute, this may not be the best choice.

To accommodate for the difference in density, use 4x as much cassava flour as coconut flour.

Next to coconut flour, almond flour is the most common alternative flour on the market. Almond flour is made by processing raw almonds into a fine powder.

Although almonds have a different taste than coconut, their nutty flavor profile provides a similar feel to a recipe.

Almond flour does not absorb as much moisture as coconut flour. To maintain the right consistency, you will need to use more almond flour and less liquid.

Start with 4x the amount of almond flour. Add any liquids (water, milk, oil) the recipe calls for slowly while stirring. Once you reach the right consistency, stop adding liquid.

Flax meal is made from ground flax seeds. The consistency of flax meal is a bit grainy and not as finely ground as coconut flour. Its texture is more like almond flour.

This means that you do not need as much when using it as a substitute for coconut flour.

Use 3x as much flax meal when replacing coconut flour in a recipe.

Hazelnut is another type of nut flour. While it is less popular than almond flour and other flour alternatives, it is a decent substitute for coconut flour. So, if you have a bag on hand give it a try.

Hazelnut flour has a more prominent taste than other flours, even coconut flour. Its texture is also grainier. It is also quite expensive. All reasons that this substitute is best for replacing a small amount of coconut flour.

Begin by using 2x as much hazelnut flour as coconut flour. If needed, add more to absorb the liquid, and reach the right consistency.

If you don’t want something too nutty, rice flour is a good choice for neutral-tasting flour. Although, brown rice flour has a somewhat nutty taste. Therefore, opt for white rice flour if you want a neutral flavor.

As with most of the other substitutes, rice flour is less dense than coconut flour. To keep your recipe from being liquid you will need to increase the amount of rice flour. You may also want to decrease the liquid in the recipe. but it does absorb liquid a bit better than other flours.

Soy flour is a great coconut flour substitute because it has a similar density. Therefore, you don’t need to use quite as much as other flours to substitute.

The biggest drawback of soy flour is its taste. Soy flour has a distinct taste that not everyone loves. A recipe with a strong blend of flavors can mask the taste, but it is important to know that it might impact the final flavor.

Compared to other substitutes, soy flour is less expensive though. It is also gluten-free and nut-free. It will not be a good choice for those with soy allergies though.

If soy flour doesn’t sound like the right fit for you, consider giving chickpea flour a try. Chickpea flour is made by processing dried chickpeas (garbanzo beans) into finely ground flour.

While still coming from a bean, chickpea flour offers a softer flavor than soy flour. This makes it a more palatable substitute for many people.

With high levels of protein and starch, chickpea flour is denser than other flour.

You will only need to use 2x the amount of chickpea flour to replace coconut flour in a recipe.

If you run out of coconut flour, oat flour is a great alternative that you can make at home! All you need is a canister of raw oats and a blender or food processor.

Simply blend the raw oats until you have a powder that is the consistency of flour. If you have oats that are certified gluten-free, then you have another gluten-free, nut-free, soy-free flour!

Even though oat flour is an easy alternative, it is the least absorbent of the substitutes. You will need to use 5x the amount of oat flour to replace the coconut flour in your recipe.

While not an overly prominent flavor, oat flour will add a mild earthy taste to your final dish.

Most recipes that call for coconut flour are meant to be gluten-free. That doesn’t mean they have to be though!

If you (or those you are baking for) are not allergic to gluten, then you don’t have to use gluten-free flour. You can use regular all-purpose flour.

All-purpose flour has a nice neutral flavor. However, some find that compared to coconut flour, this neutral taste is somewhat flat. It does not provide the complexity or slight sweetness that coconut flour does.

If your recipe does not hinge on the strong taste of coconut, the neutral flavor profile should work. If you have a recipe with a lot of complex flavors, the neutral backdrop of all-purpose flour can even help them come through better.

All-purpose flour is softer and less dense than coconut flour. You will need to use 4x as much when using it as a substitute.

The Best Substitutes for Cooking

While any of the substitutes above can be used for both baking and cooking, there are a few additional ones that are best for only cooking. The three additional substitutes below are excellent thickening agents.

These three alternatives can be used to replace coconut flour in soups, stews, and other recipes that need to be thickened.

Tapioca flour has a neutral flavor like cassava flour. However, it has a very different texture. Tapioca flour is finely milled and starchy. It resembles a fine powder (like cornstarch), rather than flour.

Tapioca flour can be used in an even 1:1 ratio to replace coconut flour as a thickening agent.

Cornstarch is another great choice to help thicken soups, stews, and sauces. While it can be used to replace coconut flour in these types of dishes, it does need to be modified a bit.

Before adding to the other ingredients, cornstarch needs to be mixed with water to make a slurry. The sludge can then be slowly stirred in.

Add cornstarch to a small bowl and add water. Begin with a 1:1 ratio of cornstarch to coconut flour. Add enough water to make a milky liquid. Slowly add the slurry to your recipe. Add as much as you need to get the right consistency (you may not need the whole bowl).

Arrowroot flour (or powder) comes from the root of another starchy vegetable (much like the cassava root). Therefore, it has a similar consistency to tapioca flour.

Arrowroot also resembles cornstarch. In fact, it is often used as a substitute for cornstarch by those who don’t use corn products.

You can use arrowroot powder as a substitute for coconut flour in the same way you use tapioca flour and cornstarch. Arrowroot can be added directly to the other ingredients or made into a slurry first.

Start with a 1:1 substitution of arrowroot for coconut flour. Add slowly and stir. Stop when you reach the desired thickness.

We hope we helped you find the perfect swap for coconut flour! Let us know if you found this article useful and what you made with your coconut flour substitute!

Print Recipe Leave A Comment
Love This Recipe?Click On A Star To Rate It!
5 from 7 reviews

*Nutritional information is calculated for the cassava root only.