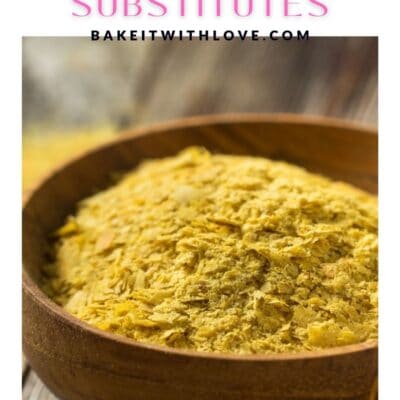 A nutritional yeast substitute may not be something you need often while cooking, but when you do it's helpful to know the best alternatives! This list includes many common ingredients and a few not-so-common (depending on where you live), so there is sure to be a perfect substitute for you among them!

The cheesy and nutty flavor of nutritional yeast is a popular alternative for cheese in vegan dishes. This inactivated form of yeast is also a wonderful addition to salads, soups, popcorn, and other dairy-free dishes.

If you are vegan (or follow a dairy-free diet) then you may have used it before. Maybe you ran out - and that’s why you need to find an equally tasty substitute.

On the other hand, maybe you are new to the dairy-free and vegan world. Therefore, you may not have nutritional yeast for a new recipe.

If you are new to nutritional yeast, I highly recommend giving it a go in your recipe at some point. For today, though, let’s find you a tasty alternative to use!

If you regularly make bread or brew your own beer, then you may have brewer’s yeast at your house. If so, this is one of the best substitutes for nutritional yeast.

However, its overall flavor profile is more bitter than nutritional yeast. You may also notice hints of beer in your final dish.

To keep from overpowering the flavor of your dish, use about ⅔ the amount the recipe calls for: 2 teaspoons of brewer’s yeast for 1 tablespoon of nutritional yeast.

If brewer’s yeast is one of the best substitutes, then it is important to mention vegemite. Vegemite is a paste that is made from leftover brewer’s yeast. However, it does have additional spices added to it.

A common food in Australia, this may not be a go-to substitute you can grab from your cupboard. If you have a jar on hand though, give it a try.

Marmite is another yeast extract condiment, like Vegemite. Therefore, it will also work as a substitute for nutritional yeast.

While Vegemite is native to Australia, marmite is a common British condiment. It has a similar flavor profile to vegemite but is milder and slightly sweeter. It is also the consistency of syrup.

The syrup consistency is quite different than the dry texture of nutritional yeast. Therefore, it works best in soups and sauces.

Start with 2 teaspoons of marmite in place of 1 tablespoon of nutritional yeast.

While brewer’s yeast and vegemite are great substitutes, they may not be the most common to have in your kitchen. One that you are likely to have though is soy sauce.

Soy sauce offers a salty and savory taste that nutritional yeast also has. Soy sauce does not offer the nutty and cheesy undertones though. Moreover, soy sauce is a liquid rather than dry flakes.

With these differences in mind, soy sauce is best used in soups and sauces that call on nutritional yeast for the earthy umami flavor.

If you need a gluten-free alternative, then soy sauce will not work. However, coconut aminos will. Made from the sap in coconut trees, coconut aminos are naturally gluten and soy-free.

This naturally flavorful condiment offers the same savory and salty flavors soy sauce offers as a substitute. In addition, coconut aminos have a bit of a nutty undertone.

This gives them an even closer flavor profile to nutritional yeast than soy sauce.

While they do reflect the earthy flavors of nutritional yeast, coconut aminos are somewhat sweet. Therefore, they may not be ideal for every recipe.

Coconut aminos are also liquid. It is best to use these in liquid-based recipes.

Start with using about ⅓ the amount the recipe calls for: ⅓ teaspoon coconut aminos for 1 tablespoon nutritional yeast. You will probably use a bit more than a ⅓ but it is best to start with less and add more slowly to taste.

Sticking with umami flavored substitutes, miso paste is another option. Miso is a Japanese paste made from fermented soybeans. It has a similar flavor profile to soy sauce. Miso is another umami option

There are several types of miso paste. The best choice to use as a substitute for nutritional yeast is white miso paste.

Due to its thick consistency, it is best to use this alternative in hot dishes. Therefore, the paste can easily dissolve and mix with the other ingredients.

Use ⅓ miso paste to avoid making your dish too salty: 1 teaspoon of miso paste for 1 tablespoon of nutritional yeast.

Unless you do a lot of Japanese cooking, miso paste is probably not a substitute you already have in your pantry. However, you may have dried mushrooms that you can use.

Dried mushrooms provide the earthy umami flavors of nutritional yeast. However, they will not provide nutty or cheesy flavors.

While you won’t get a cheesy sauce from dried mushrooms, you can still sprinkle them on top of pasta for a different tasty flavor.

You will get the best experience with dried mushrooms if you first blend them up to a powder. Just toss in a blender or food processor and pulse.

Use the ground mushrooms in a 1:1 exchange for nutritional yeast. Use them as a topping, in salads, pasta, or soups and sauces.

Dried seaweed is easier to find than you might expect. It is available in packages in most grocery stores. It is a great substitute for dishes that need a rich umami flavor. Moreover, it works in both hot and cold dishes.

In addition to the umami flavor though, seaweed does have its own distinct taste. It does not have a nutty or cheesy flavor to resemble nutritional yeast. However, when it is broken up it has a similar texture.

If you don’t mind a twist on the original flavor of your dish, try using dry seaweed. Once it is ground up it can be used in a 1:1 exchange for nutritional yeast.

Fried onions are another substitute that will shift the overall flavor, but it can be an oh-so-good new flavor! Fried (or dried) onions have a wonderfully rich and savory taste that makes any dish feel decadent.

If you have some fried onions on hand, try them as a tasty substitute for nutritional yeast. With a similar texture, these are best used sprinkled on top of a dish right before baking or eating.

Fried onions have a richer flavor than nutritional yeast. To keep from overpowering your dish, start with half the amount the recipe calls for. Once you give it a taste, you can add more if needed.

One of the most popular uses of nutritional yeast is to make dairy-free macaroni and cheese. When finding a substitute for this dish you need a very specific alternative.

One that offers the savory and cheesy flavor, plus the right texture.

A perfect substitute for this type of recipe is vegan parmesan cheese. With a savory and slightly bitter taste, it is also a good substitute in other vegan dishes.

Use vegan parmesan in a 1:1 substitution for nutritional yeast.

Chickpea flour is made from dried chickpeas that are ground into a fine powder. You can find this in most specialty health food stores. You can also make your own by roasting or dehydrating chickpeas and then blending them.

Ground chickpeas have a neutral taste, which is always a benefit for a substitute. They will take on the flavors of the recipe, or you can add your own seasonings.

Garlic powder, paprika, and onion powder are all tasty choices.

Cashews are an amazing substitute used in many vegan dishes. Their neutral taste is perfect for taking on the other flavors around it. Moreover, they don’t overpower any of the flavors.

You can make ground cashews by simply tossing a cup of raw cashews into a food processor or blender and pulsing. Pulse just until they are finely ground.

Cashews are a tasty substitute for nutritional yeast because while they have a neutral flavor, they still offer a soft nuttiness that resembles the nutritional yeast. To enhance the flavor, you can add spices of your choice.

Ground cashews can be used in a simple 1:1 exchange for nutritional yeast. Especially in large quantities.

On the other end of the recipe spectrum, if you only need a small amount of nutritional yeast, you can use vegetable bouillon powder (or broth).

Vegetable bouillon powder has a similar texture to nutritional yeast. However, due to its taste, you will want to incorporate it into a recipe rather than just sprinkle it on top. Hot dishes are best so the granules will dissolve.

This powder will not provide the nutty flavor profile of nutritional yeast. It will provide the salty and savory tones though.

Vegetable bouillon powder can be used in a 1:1 ratio.

If you are in a real bind for a nutritional yeast substitute, vegetable broth can work in a pinch. Due to its liquid consistency, it will not work in all recipes. In addition, it is best used only in small amounts. Using it in larger quantities may ruin the recipe.

Like its dry bouillon powder counterpart, vegetable broth will offer a similar salty flavor. It will also be lacking any nutty or cheesy undertones.

The right ratio of vegetable broth for nutritional yeast will vary depending on the recipe. Start with a very small amount. Add more as desired for taste. Keep an eye on the consistency of the dish so as not to make it too liquid.

Though nutritional yeast may not be considered a common kitchen ingredient, you don't want to be in a bind when a recipe calls for it! Simply try any of these incredible substitutes, then come back and tell us how it worked out! 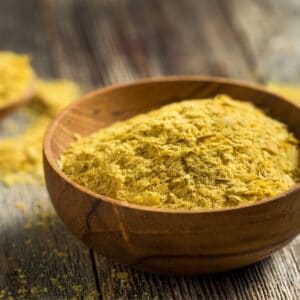 A nutritional yeast substitute may not be something you need often while cooking, but when you do it's helpful to know the best alternatives! This list includes many common ingredients and a few not-so-common (depending on where you live), so there is sure to be a perfect substitute for you among them!
Author | Angela
Servings: 1 serving
Calories: 39kcal
Prep 2 minutes
Cooking 0 minutes
Total Time 2 minutes
Pin Recipe Share on Facebook

*Nutritional information is calculated based only on the brewer's yeast option.