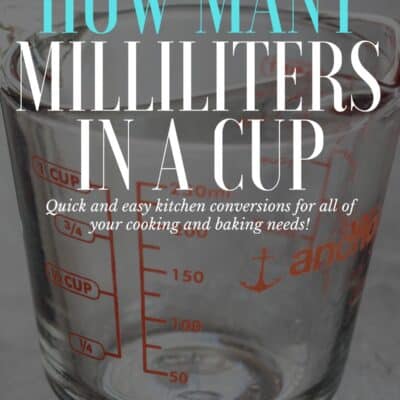 If you're looking for the number of milliliters mL in a cup, the answer is not as straightforward as you may think! If your recipe calls for cups but you only have metric measuring tools, what do you do? Just take a look at this page and learn how to convert from ml to cups and vice versa no matter where in the world you are cooking!

How Many Milliliters Are In A Cup?

Therefore, knowing how to convert milliliters is essential for using recipes from other countries.

What is a Milliliter (mL)?

In most countries around the world, milliliters and liters are used to measure liquid in all forms. If you live in the United States though, you are used to liquid measurements in pints, quarts, and gallons.

When thinking about conversions in the kitchen, I think it helps to have a comparison to something I am familiar with. So, here is a quick comparison of the metric system to the imperial system.

The metric system is considered by most to be the universal form of measurement. It is used in most countries around the world.

The imperial system originated with the British government. Until the early 1800s, it was the primary form of measurement in the UK. However, while it is still used for some measurements in England, most of the UK has moved to the metric system.

Does the United States Only Use the Imperial System?

The imperial system is the primary form of measurement in the United States. From water to food, to the gas used for cars – liquids are measured in cups, pints, quarts, and gallons.

However, while these are the primary measurements there are a few exceptions. Think about your favorite bottle of soda, wine, or alcohol. These beverages are all measured in liters and milliliters.

While the United States uses some metric measurements, the United Kingdom still uses some imperial systems. This shows up mostly in their measuring utensils.

What is the Difference Between a Cup In The U.S. And One In The UK?

The difference in a cup is mostly seen between measuring cups in the U.S. and the UK. While a U.S. measuring cup holds 8 ounces, a UK cup holds 9.61 ounces. That is almost 2 more ounces!

Therefore, using the correct measurement that was used when the recipe was created is essential for the correct outcome. This goes for milliliters as well.

How Many Milliliters Are in a U.S. Cup vs a UK Cup?

Since the volume of a cup measurement in the United States is different than the United Kingdom, it will impact milliliters as well. Moreover, these are not the only two countries with different volumes for the same unit of measurement.

*A cup in Latin America, Canada, and New Zealand is also slightly different.

While the difference in volume is not extreme between these countries, it is significant. It is enough to slightly alter a recipe. Therefore, depending on where you live and what you are cooking you may need to consider these slight differences.

If you are cooking in the United States you will usually use the measurement of 236.5 milliliters.

However, if you live in the United States and find a recipe from a different country you may need to adjust your measurement. Adding a little bit more for a UK-based recipe or using a little bit less for a Latin American or Canadian recipe.

The same goes for if you are using an outside recipe and you live in the UK, Canada, Latin America, or New Zealand.

How Many Milliliters in an 8 Ounce Cup?

If you find yourself needing to adjust for the different volumes of international measuring cups, you can use this conversion chart to help.

Milliliters are for Measuring Liquid

Keep in mind that these measurements are only for liquids. A U.S. liquid measuring cup will always weigh 8 ounces when filled with liquid. Milk, water, coffee, tea, alcohol. All liquids have the same weight. Therefore, the liquid measurement will always be 236.5 milliliters.

When switching to dry goods, you want to look at how many grams are in a cup. This is similar to switching from measuring fluid ounces to dry goods. The volume may stay the same, but the weight can shift.

Come back to this page then next time you need to do some ml to cup conversions! We'd love to hear if you found this information useful, so drop us a quick comment below!

bakeitwithlove.com/about/
« Cake Out Of A Bundt Pan
Beef Enchiladas »