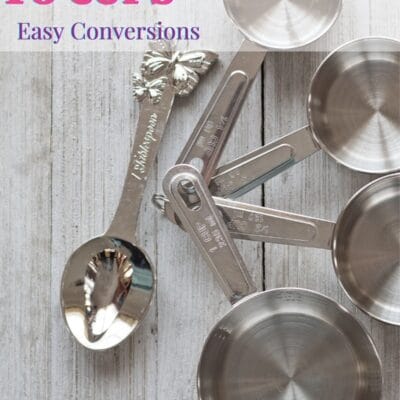 If you're working on a recipe and need to know how many tablespoons are in a cup for quick conversions, you can use the information given here to easily scale recipes up and down! Memorizing some of these basic measuring conversions can save you time in the kitchen when cooking and baking!

The number one reason that I end up asking myself this question is for scaling recipes up or down. Once you have some of these simple conversions mastered, it will save you all sorts of time googling the answer!

All of the conversions noted here are based on the US Standard Cup (customary or standard unit cup size), which is also used throughout the blog. Of course, each recipe posted also has metric conversions to grams and liters and notes where other measurements like ounces might apply.

Are cup measurements the same everywhere? Unfortunately, no, they're not! Depending on your recipe this may or may not make a difference in the results.

Recipes using cups for measuring ingredients like carrots, celery, onions, or mushrooms will not impact the overall flavor of your dish by having a bot more or less of an ingredient. Baking recipes, where you are measuring out flour in particular, will need to be exact. Know where the recipe developer is located and use measuring cups of the same unit for best results.

The US Customary System (USCS)

The US Legal Cup (used for nutrition labeling per FDA)

*Cup measurements from The Calculator Site.

Ordinarily, even in baking ( particularly with recipes that I am already familiar with ) I still use measuring cups. To properly use your measuring cups, fill the cup to the top and use a knife to scrape across the top and level the ingredient.

Here in the U.S., the imperial system is still used for measurements. It was originally called the British Imperial System, but when the U.S. was established we kept the Imperial System while many other countries moved to the Metric System.

When it comes to cooking-specific measurements, however, many places recognize cups, tablespoons, and teaspoons as measurements for volume!

The chart below shares all of these, plus more, as well as the fluid ounces of each cup equivalency.

How Many Teaspoons in a Tablespoon?

For each tablespoon in a recipe, there are 3 teaspoons. Or 1 ½ teaspoons for ½ tablespoon. For measurements smaller than a teaspoon, you can measure by hand.

A 'dash' of a liquid ingredient is like a pinch, roughly ⅛ of a teaspoon.

When measuring liquids, it is important to use a measuring cup that is intended for liquids. You should not use your standard measuring cups set that you would use for dry ingredients.

The easy part of measuring liquids is that 8 ounces of water really does weigh 8 ounces. Here are some more quick references for fluid ounce conversions:

If you have any other conversions you'd like to have added, just ask! I'll be adding more as time goes by so I do hope that you check back in and let me know if you found any of these tidbits helpful!