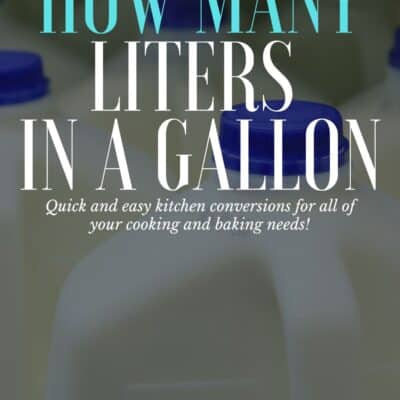 Knowing the number of liters in a gallon is a useful conversion that could come in handy when you least expect it! We also discuss the relation between liters, gallons, cups, quarts, and ounces! Don't worry, you don't need to memorize the conversions because we also included a quick liquid measurements conversion chart!

The Number Of Liters In A Gallon

When you go to the store to buy a gallon of milk, have you ever walked a couple of aisles over to also pick up a 2-liter bottle of soda? Have you ever wondered why one liquid is measured in gallons and another in liters?

Keep reading to find out why that is as well as how to convert liters to gallons and vice versa!

What is the difference between liters vs gallons?

Before looking at how many liters are in a gallon it helps to know the difference between these two units of measurement.

Gallons are a unit of measurement that follows two different systems: the imperial system and the U.S. customary system.

What are the different systems of measurement?

The imperial system of measurement originated in Britain in the 1800s. It was the primary form of measurement used by the British until the early 1900s when they began following the metric system.`

The U.S. customary system is derived from the imperial system. However, it is slightly different due to some changes made when the settlers modified it after arriving in America.

The U.S. customary system and the imperial system use the same forms of measurement.

The metric system is the oldest of these three forms and uses different units of measurement.

With so many different systems of measurement around the world, it is helpful for any cook to understand how to convert from one to the other. This allows you to make recipes quickly and easily from around the world!

What are gallons used for?

Gallons can be used to measure both dry and liquid ingredients. However, in cooking, you are most likely to work with gallons as a form of liquid measurement.

Milk and water are the most common liquids that are measured and sold in gallons. The gallon is the largest form of measurement. It is traditionally broken down into smaller measurements.

Since the measuring cup is one of the easiest ways to measure while cooking, you can also measure a gallon in cups.

These measurements can be broken down even further into fluid ounces.

The measurements above are listed according to the U.S. customary system and for the U.S. standard measuring cup.

The imperial system follows the same breakdown: 1 Gallon = 4 Quarts = 1 Pint = 2 Cups. However, the volume in the imperial cup is slightly larger than in the U.S. cup. Since the United Kingdom follows the metric system though it is easier to understand the differences by looking at how many milliliters are in a cup.

What are liters used for?

As mentioned above, milliliters are the most effective way to see the difference between the U.S. standard measuring cup, the imperial (or UK) cup, and the metric cup.

In the food world, liters are used to measure beverages like soda, wine, and alcohol. Like the gallon, a liter can also be broken down into smaller units. These are called milliliters.

Liters can also be converted into ounces.

As you can see by the conversion of liters to ounces, a liter is smaller than a gallon. A gallon is equal to 128 ounces while a liter is only equal to 33.81 ounces.

How to convert liters into gallons

Converting liters and gallons into ounces makes it easier to understand how many liters are in a gallon because you have a common form of measurement to work from.

Looking at the exact measurements of gallons to liters and vice versa may seem complicated when you think about how to convert these easily in the kitchen. For exact measurements, you can use a food scale to measure in ounces.

Simply use the scale to measure in ounces to equal either a gallon or a liter:

How to convert gallons and liters into cups

As the gallon is almost 4x the volume of a liter, most of the time you will be using the smaller conversion to a liter mentioned above. However, if needed you can also use cups to convert liters into a gallon.

Don't worry about memorizing the number of liters in a gallon. Just bookmark this page so you can refer back to the conversion chart whenever you need!