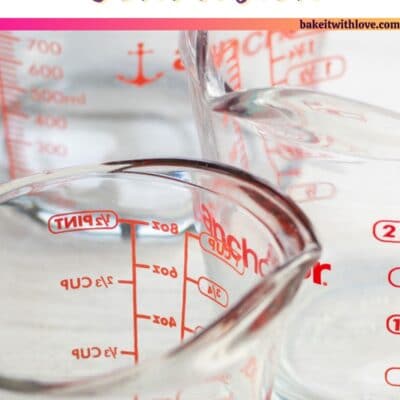 Everyone should know how many cups are in a gallon, it's not only useful in the kitchen, but also in everyday life! Learn about the differences between a U.S. gallon and an Imperial gallon, and so much more!

There’s more to how many cups are in a gallon than you might think!

This is where a simple answer requires a bit more explanation, such as what is the difference between a US gallon and an Imperial gallon? As well as what is a dry gallon?

Let’s look at how these three measurements compare. Then, you will truly know how many cups are in a gallon!

What is a US Gallon?

The imperial unit of measurement originated in the early 1800s in Britain and was the main form of measurement in many countries in the 19th century - including the United States.

While the United States was keen to get away from British rule, they ended up keeping this system of measurement, even after gaining their independence from Britain.

However, while the US maintained what was known as “Queen Anne’s Gallon” Britain shifted their measurement of the gallon. The choice made by the United States to maintain the original Imperial System of measurement resulted in what is now known as the US Standard System.

How Many Ounces Are in a US Gallon?

In many cases, the imperial unit of measurement and the US Standard system is the same. For example, both systems measure 1 foot as 12 inches.

When it comes to the gallon though, while both the US Standard System and the Imperial System state that 4 cups equal a gallon, the volume of each cup is different in each system. Therefore, each gallon is a different volume.

To help show the difference between the two it is helpful to bring in another unit of measurement – the metric system. The metric system is used in other countries around the world and measures on a decimal system.

The use of decimals allows us to see a more detailed comparison between these two gallons. The metric system measures volume through liters (or litres).

Here is how many liters are in a US gallon and an Imperial gallon:

You can easily see that the Imperial gallon is larger than a US gallon. Shifting back to the US Standard and Imperial Standard systems, this difference in volume is substantial:

That is a 25-ounce difference between the two different gallons!

What is an Imperial Gallon?

How Many Ounces Are in an Imperial Gallon?

So, while there are 16 cups in a gallon, it depends on how many ounces are in each cup. From day-to-day cooking and baking, this will likely not be an issue. If you live in the United States, then the measuring cups you purchase will always be a standard 8 ounces.

If you live in one of a handful of places that continues to use the Imperial gallon, then the standard measuring cups will be just under 10 ounces.

Who Uses the US gallon?

The United States is known as being one of the few countries to still follow a measurement system that is based on the Imperial System. Most other countries have switched to the metric system.

While the United States is the main country that uses the US gallon, there are some places, such as in South America that use the US gallon as a form of measurement for things such as gasoline. In the kitchen though, most recipes and measuring tools will follow the metric system.

Who Uses the Imperial gallon?

While the Imperial gallon was originally a form of measurement in the United Kingdom, the UK has since moved to the metric system for most things.

However, the Imperial System is still commonly used in casual circumstances – such as measuring a pint of beer!

While the UK has moved to the wide use of the metric system, a handful of countries that were originally under British rule have maintained the Imperial gallon as a standard measurement in all areas. These countries include:

What is a US Dry Gallon?

The dry gallon also has its history based on British rule. It was a measurement of dry goods and grain in historic Britain. Today though, the dry gallon tends to be primarily measured in the United States.

How Many Ounces in a Dry Gallon?

A dry gallon falls between the volume of a US gallon and an Imperial gallon. There are approximately 148 ounces in a dry gallon. This equals about 18 US standard cups in 1 dry gallon, which is 2 cups more than a US gallon of liquid.

Most standard recipes will call for the measurement of dry ingredients and grains in the form of cups, rather than gallons. Therefore, you will usually not need to convert into dry gallons. If needed though, remember that a dry gallon is more than a liquid gallon.

Once you know there are 16 US cups in a US gallon then it is easy to figure out how many cups are in other standard measurements.

To make it even easier though, here is a quick conversion guide for most liquid measurements in the kitchen. Keep this on hand to quickly reference while you are cooking.

We hope you feel like you truly understand how many cups are in a gallon! If you found this information useful, let us know by leaving a comment below!