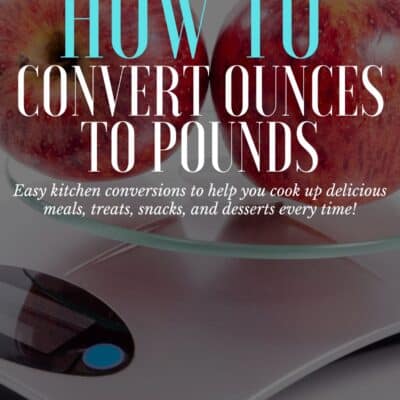 The precise number of ounces in a pound can easily be determined if you understand which conversions to use! An ounce can measure liquid or dry volume, so with a little information and a few tips and tricks you can master this common kitchen conversion! Or, skip the math and take a look at our handy ounces in a pound conversion chart!

How Many Ounces In A Pound?

Even if you have looked up how many ounces in a pound a dozen times it is normal to double-check conversions when cooking. Cooking is about precise measurements. Therefore, it is always better to double-check the conversion rather than guess.

Luckily, in today’s modern world it is super easy to look up any conversion you need! Even better, you can look up conversions across different units of measurement. Such as conversions from the metric system to the U.S. Customary system or Imperial System.

What is the U.S. Customary System?

The U.S Customary system is the primary system of measurement used in the United States. It is an offshoot of the Imperial System that was used by the British in the 1800s.  While the British eventually moved to the metric system, some of the original Imperial measurements are still used today.

Imperial measurements are primarily seen in cooking in the UK. They follow the same units of measurement as the U.S. Customary System.

What is the Metric System?

The metric system is considered the universal system of measurement. It is used to measure ingredients in kitchens around the world. It is also used for providing the volume or mass of packaged goods.

Even though pounds and ounces are two units of measurement from the U.S. Customary & Imperial Systems, seeing how they relate to the metric system can help with future conversions.

Here are the main units of measurement in the metric system.

If you are looking at how they compare to one another across systems, kilograms and grams measure mass the same way that pounds and ounces do. Liters and milliliters measure volume (specifically liquids) like gallons, quarts, and pints.

Once you understand the basics of the two systems you can easily convert within each system and across. Let’s look at the ounce and pound in more detail, to begin with.

What is an Ounce?

An ounce is a unit of measurement that measures volume. Ounces can measure liquids or dry ingredients. When measuring liquids, it is referred to as a fluid ounce.

Ounces can be converted to many different units of measurement. Remember that there are both U.S. Customary ounces and Imperial ounces. Here are some common comparisons to demonstrate these slight differences.

For most of us cooking in the United States, the basics of 8 fluid ounces = 1 cup is enough knowledge for most recipes. However, as you expand your cooking skills knowing the differences between the Imperial System may help you.

What is a Pound?

The pound is another unit of measurement that has some slight differences. However, like the measurement of ounces to cup above, the simplest conversion is the one you will most likely use the most. So, let’s start with the simple conversion of ounces in a pound for the United States.

This is the measurement for any solid or dry ingredient: meat, flour, sugar, etc. When measuring liquids, the measurement would be done in gallons, quarts, or pints. The pint is essentially the equivalent of pounds since they are the same in ounces.

The Difference Between Solids And Liquids

It is important to note the differences between solid (dry) ingredients and liquids because the mass or volume can change depending on how they are measured. Above, I mentioned that there are 8 fluid ounces in a cup. This is only true for liquids.

Only liquids have a consistent volume-to-weight ratio that can be used for conversions.

You can use the same pint measuring tool for water, coffee, and milk and always have the same volume. Pounds are different though.

The weight of dry ingredients varies from one ingredient to the next. So, while one pound is always equal to 16 ounces, the mass of those 16 ounces will look different from food to food.

Due to the difference in mass between dry goods and meats it is important to measure these foods using a food scale. Using a food scale will ensure that you always have 16 ounces (or 1 pound) of the desired ingredient.

What is the difference between pounds in the U.S. and UK?

Again, for most of your conversions, you simply need to know that 16 ounces = 1 pound. Once you get into recipes that use metric units of measurement though, you may need to know the difference between a U.S. pound and a UK pound.

Like the difference in the U.S. and Imperial (UK) measuring cups, there is also a difference in pounds. The U.S. pound is larger than the Imperial pound.

Grams And Ounces In A Pound (U.S) Conversion Chart

Leave a comment below if you found this post informative! For more help with conversions, take a look at my other posts on kitchen measurements: