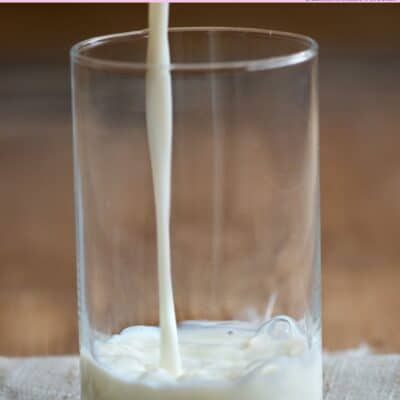 Finding the best evaporated milk substitute could be key to the outcome of your delicious dessert, so be sure you find the right alternative! I have gathered 13 of the best substitutions for evaporated milk to help you out when you find yourself in a bind!

A list of the best ingredients for replacing evaporated milk in any recipe!

Evaporated milk is a super creamy milk product that has a variety of uses in the kitchen. It is a popular ingredient for making rich and decadent desserts. It is also used to make some of our favorite simple tasty treats!

Due to its rich and creamy texture, it may also be used to help create a super creamy soup or sauce. While there are so many ways evaporated milk can be used, it often only gets highlighted during the holiday months, especially around Thanksgiving (it’s a key ingredient to pumpkin pie!).

So, you may forget about it throughout the rest of the year and find you need a substitute mid-cooking. Other reasons you may need an alternative are due to allergies or health choices.

Even though evaporated milk comes in a can, it is still a milk product. Therefore, it contains lactose and is an animal byproduct. This makes it unsuitable for those who are lactose intolerant, have a milk allergy, or are vegan.

If your only need for an evaporated milk substitute is due to not having any on hand, there are a handful of other great dairy substitutes you can use (yes, including regular milk). There are also plenty of non-dairy substitutes to choose from!

If you have regular milk in the refrigerator, you are halfway there to a perfect substitute. Straight out of the fridge, regular milk is not quite the right consistency for what you need, but with a few minutes on the stovetop, you can quickly make your own evaporated milk.

To make your own evaporated milk, you need to start with more than what you need in your recipe. This is because you will be boiling the milk to make it thicker, which will reduce it in volume.

The easiest thing to do is double what your recipe calls for. You may end up with a bit left over at the end, but it is better to have more than not enough.

If you feel like you have too much, you can also continue to boil it down to a thicker consistency (reducing the volume even more). To make your own evaporated milk, add the regular milk (whole, 2%, 1%, skim) to a saucepan and bring to a boil.

Use the now evaporated milk in your recipe exactly as it calls for.

While regular milk isn’t quite the right consistency straight out of the fridge, half-and-half is! Half-and-half has just enough extra fat to make it a thicker consistency that resembles evaporated milk.

Due to the extra fat in half-and-half, it will provide a richer overall flavor to your dish. It is unlikely anyone will complain about that though!

Make an easy 1:1 exchange of half-and-half for evaporated milk in any of your recipes.

A bit thicker than half-and-half, heavy cream also has a great consistency that can easily and quickly replace evaporated milk in a recipe. Heavy cream does have a much richer taste than evaporated milk, but this will only add to the overall decadence of your dish.

Heavy cream can be used in any recipe as a simple 1:1 substitution for evaporated milk. If you don’t want your recipe to be quite so rich, dilute the cream with water before measuring.

Simply mix equal parts heavy cream and water to equal the amount of evaporated milk needed for the recipe.

Powdered milk is one of those ingredients that is less common to have on hand than evaporated milk. Therefore, you may not have this lying around as a quick substitute.

If you stocked up on some for your food storage though, then it is the best substitute for evaporated milk. It is super easy to use as well.

Read the directions for rehydrating the powdered milk, then use only 60% of the water called for in reconstituting the milk. Once you have liquid milk, use it in a 1:1 exchange for the evaporated milk.

There are some brands of vegan evaporated milk on the market. Depending on where you live though, they may be harder to find.

Consider checking online or a specialty health food store. If you find vegan evaporated milk, then use it in a simple 1:1 substitution in any recipe.

If you can’t find vegan evaporated milk to buy, you can make your own!

Many plant-based milks that you already enjoy can be made into vegan evaporated milk by following the same process above for reducing the water content in cow milk.

One thing to consider when using plant-based milks is that they have a higher water content than cow’s milk. Therefore, even when you reduce it over the heat it may not be quite as thick as needed for certain recipes.

If making your own dairy-free evaporated milk for a soup or sauce that you want to have a thicker consistency, consider adding a thickening agent like cornstarch (or a cornstarch substitute) to get the desired thickness.

When using dairy-free evaporated milk in baking, you do not need to add a thickening agent. Just reducing the water content over the heat will be good enough.

Soy milk is the best option for making non-dairy evaporated milk because it has the closest texture to regular milk. It also provides the most neutral flavor.

If you have a soy allergy, then you will need to choose a different plant-based milk. Almond milk and cashew milk both have milder tastes than other nut milks.

This makes them the best options for both sweet and savory dishes.

While canned coconut milk can be used in a 1:1 exchange, the coconut milk that comes in a carton (light coconut milk) has a higher water content. Therefore, it needs to be reduced over the heat before using.

Oat milk is becoming more popular by the minute! A delicious dairy alternative, it can be used in the same way plant and nut milks are used.

Just follow the same directions for reducing it over the heat and then use it in your favorite dishes.

One thing to be mindful of with oat milk, and other non-dairy milks, is that many of them have sweetener added. Therefore, make sure you are using a non-sweetened variety.

Flaxseed milk is less popular than the other milk alternatives above. When it comes to neutral non-dairy milk though, this is a great option!

Follow the same directions for reducing the water content and then use in a 1:1 exchange for evaporated milk in sweet and savory dishes.

Hemp milk is a delicious and creamy plant-based milk that has a slightly sweeter flavor. It can be used in the same way as these other milks, but it is better suited for baking (due to its sweetness).

This is a new one on the market, so you may not have even heard of it! Like its fellow plant-based milks, this is made from processing quinoa with milk to create a milk-like beverage.

Unlike the others mentioned above, quinoa milk tends to be a bit thicker. Therefore, if you happen to find this you may want to give it a try.

If you find the right brand you may not need to reduce it over the heat to get the right consistency.

Canned coconut milk has a higher fat content than other plant-based milks. This makes it an easy substitute for evaporated milk because you don’t need to reduce the water over the heat.

Due to coconut milk’s distinct flavor profile, it works best in baked goods that pair well with a hint of coconut. It is also a delightful choice for many savory dishes, especially Indian and Thai-inspired dishes.

Use canned coconut milk in an equal 1:1 substitution for evaporated milk in any recipe.

Choosing the best substitute for evaporated milk depends on your preferences and what you have available. If you don’t have a reason to avoid dairy, then one of the other dairy options will provide you with the closest final dish to the original recipe.

If you prefer a non-dairy option, be mindful of what type of recipe you are making. Remember that most non-dairy alternatives have their own distinct flavor, so choose a milk alternative with a flavor profile that will complement the dish you are making.

We wish you the best of luck with your recipe and we hope you've found this information useful! Let us know what you think by commenting below! 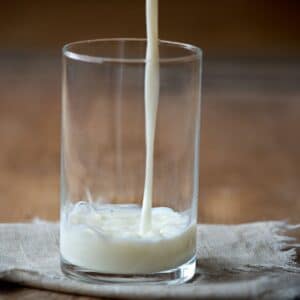 Print Recipe Leave A Comment
Love This Recipe?Click On A Star To Rate It!
5 from 3 reviews

Finding the best evaporated milk substitute could be key to the outcome of your delicious dessert, so be sure you find the right alternative! I have gathered 13 of the best substitutions for evaporated milk to help you out when you find yourself in a bind!
Author | Angela
Servings: 1 serving
Calories: 298kcal
Prep 2 minutes
Cooking 25 minutes
Total Time 27 minutes
Pin Recipe Share on Facebook