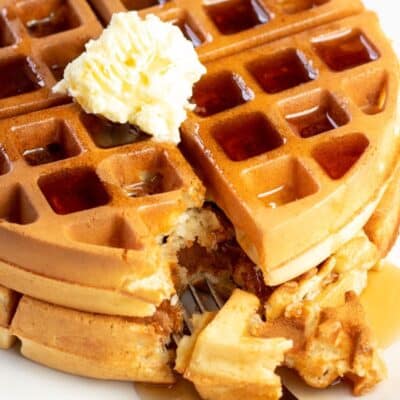 Waffles vs Belgian waffles - what is the difference, where did they originate, do they use the same batter, and which waffle maker do I need? I have all of the answers (and more) to these important questions! Here is the best guide to everything you need to know about waffles and Belgian waffles.

Waffles are an incredibly popular breakfast staple in many households! I'm sure you've heard people talk about waffles and Belgian waffles, but do you know what the differences really are?

These two breakfast treats are actually more different than you might think. From recipes to origins and even toppings, there are a lot of variances between the two!

🤔 What Is A Waffle

Waffles can go by many different names. They might be referred to as American, classic, old-fashioned, regular, or traditional waffles.

This amazingly popular treat is enjoyed as both breakfast or dessert! It has a batter that is cooked between two heated plates- and you can even find a waffle iron in a ton of different shapes!

🤨 What Is A Belgian Waffle

Belgian waffles are a type of waffle that is made with a thin, yeast-based batter. They are made by being cooked between two heated plates that have large and deep pockets!

Would you be surprised if I told you that these two types of waffles don't even have the same background? They originated in different places during different time periods!

Waffles are actually one of the oldest breakfast options around! They date all the way back to ancient Greece. However, they are relatively different than the kind that you know and love today.

In Greece, the obelios (as the Greeks called them) used a cereal-based batter that was cooked between two metal plates. They didn't yet have the classic pockets found in waffles today, and they were meant to be savory!

Now, jump to Europe during the Medieval times when the Catholic church began serving waffles to accompany communion wafers. They would draw religious symbols on them and serve them after meals, calling them oublies.

As time passed, these waffles had an evolving taste due to the spices and seasonings that the Crusaders brought back with them from their expeditions!

As these popular treats begin to spread across all of Europe, they became known as wafers. They were cooked over an open fire between two metal plates with long handles. As the pans grew deeper over time, the name became wafel.

Now, the waffles that we all know and love today are pinpointed to two distinct countries: the Netherlands and Belgium.

Waffles gained global popularity as the Dutch version of wafles came to the United States with the pilgrims in 1620! The rest is history!

Belgian waffles were first created at The Brussels World Fair Expo in 1958. They were actually called the Brussels waffle. They were introduced to America in 1962 at the World's Fair, but no one seemed to care for them.

However, just a couple of years later at the 64-65 World's Fair, Maurice Vermersch offered a plain Brussels waffle as well as one that was topped with whipped cream and strawberries. Of course, the topped variety was a hit and the family changed the name to Belgian waffles.

There is a common misconception that both regular waffles and Belgian waffles use the same batter and are just cooked in different types of waffle makers. However, this is not true!

Belgian waffles have a batter that is yeast-based. It is actually fairly common for people to mix up the batter for a Belgian waffle and then allow it to sit overnight before cooking it in the morning.

These waffles always require a leavening agent or use egg whites to ensure that the waffles come out lighter-than-air and ultra fluffy!

Traditional waffles are denser than Belgian waffles. They also don't use yeast and have a batter that is more similar to pancakes (but still not the same).

Since regular waffles don't have yeast, they use baking powder as a leavening agent. You may find some Belgian waffle recipes also include baking powder, but they do not contain as much as American waffles.

Regular waffles can be made in any type of waffle maker you can find! They come in all kinds of special shapes, rectangles, circles, as well as different sizes!

Additionally, they have a unique way of being used. The batter is poured into the waffle iron, closed, and then flipped for the waffles to cook!

We've now discussed all the different components of these two tasty breakfast items.

Traditional waffles have been around much longer than Belgian waffles- and have evolved a ton along the way! These standard waffles are thinner and denser and use a recipe that does not involve yeast, unlike the Belgian variety.

Of course, just like any food out there, the waffle that you think is the best is completely up to you! Some people prefer the thinness of standard waffles. However, others love that the deep pockets of Belgian waffles can hold a ton of tasty toppings! Which one do you prefer?

Now that you've read this guide all about waffles vs Belgian waffles, let me know what you think! Leave a comment down below!

Can Belgian Waffles Be Made In A Regular Waffle Maker?

Nope! The reason that this won't work is that the batter is made in a way that allows it to rise significantly. If you use a standard waffle maker, the batter won't be able to rise while it cooks. Of course, you won't have the traditional deep pockets either.

Why Do Belgian Waffles Need To Be Flipped?

If you've ever used a Belgian waffle maker, you know that they flip over while the waffle is cooking. This is for two reasons.
First, it helps the batter to spread out more evenly. Additionally, it helps the waffle to cook quicker!

What Are The Two Types Of Belgian Waffles? 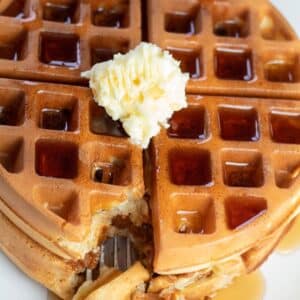 Waffles vs Belgian Waffles: Waffles (Guide To Everything You Need To Know)

Waffles vs Belgian waffles - what is the difference, where did they originate, do they use the same batter, and which waffle maker do I need? I have all of the answers (and more) to these important questions! Here is the best guide to everything you need to know about waffles and Belgian waffles.
Author | Angela
Servings: 6 servings
Calories: 397kcal
Prep 5 minutes
Cooking 20 minutes
Total Time 25 minutes
Pin Recipe Share on Facebook