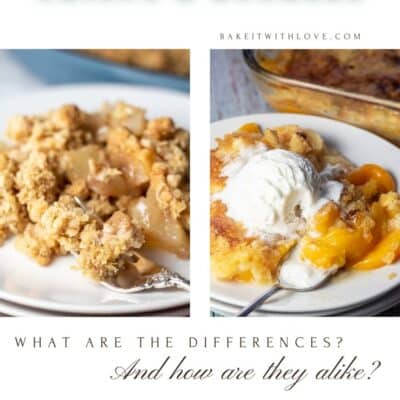 Did you know that cobblers, crumbles, crisps & buckles have many differences but also share many similarities? As fall rolls around and you start to see an influx of holiday and seasonal dessert recipes, will you be able to tell them apart? Well, we are here to fill you in on all things baked goods so you can differentiate between these 4 fruity desserts!

Who doesn’t love a peach cobbler to close out the last days of summer? What about a warm cobbler on a cold fall day? Maybe a blueberry crisp with vanilla ice cream?

When it comes to combining fruit and dough – there aren’t many things to dislike. In fact, it is such a beloved combination that several types of desserts are built around this pairing. While cobblers, crisps, and crumbles are the ones we think of most – there are many other tasty options!

Take a look at the different types of desserts to see which ones you may want to bake today!

Cobblers tend to be the best known of these types of desserts. So, let’s use it as the primary dessert to compare the others.

A cobbler is a dessert that originated in England. It is well known for its sweet fruit base that is topped with dough. Specifically, biscuit dough.

Traditionally, biscuit dough (or scone mix) is used to top a cobbler. These types of dough create a thick layer that gets golden on the top when baked. It’s not just about the golden top though. The bottom of the biscuit or scone dough stays moist and fluffy. Perfect for absorbing the juices of the warm fruit.

From peaches to berries, any fruit will do for a cobbler. However, fruits that create a nice syrup base when cooked are ideal. This syrupy sweetness soaks into the topping while it cooks. The result is a perfect cobbler: a firm golden topping covering warm fruit that is perfectly blended by the doughy underside of the topping.

Basics of a Cobbler

Crisps begin the same as a cobbler with a fruit bottom. Typically, crisps use berries rather than stone fruits (like peaches). However, any fruit will work.

The difference between a crisp and a cobbler is in the topping. Rather than a thick dough topping, a crisp has a light – and crispy – topping.

This topping is made from a mixture of sugar, flour, butter, and oats. Oats are key to a crisp topping. They are the ingredient that gets brown and crunchy and creates a crispy texture.

Basics of a Crisp

Crumbles are almost identical to crisps. They have the same fruit layer on the bottom and a crumbly top. The key difference between a crumble and a crisp is one ingredient.

A crumble topping is made from a blend of sugar, flour, and butter. Unlike a crisp, it does not include oats. This results in a softer topping.

The topping of a crumble is buttery and crumbly, but not crunchy. It resembles a streusel topping.

If you love cobblers and pies, then a pandowdy is a dessert you need to try. This old-fashioned dessert has the same structure as a cobbler: fruit bottom and dough topping. However, the big difference is the type of dough used for the topping.

A pandowdy uses pie crust as a topping. The result is a thinner topping that is less doughy than a cobbler. Since it is thinner, it often cracks during cooking and the juicy fruit will bubble through to the top.

This is a great choice if you prefer a dessert that focuses on fruit. It is also a fantastic dessert to try around the holidays when you may have some leftover pie crust!

Even lesser known than a pandowdy is a sonker – unless you are from North Carolina. Sonkers are desserts specific to a small area near the Blue Ridge Mountains in North Carolina.

Sonkers are like cobblers. They have a fruit bottom and a dough topping. However, there are some key differences.

The fruit base of a sonker is thinner than a cobbler. It is the consistency of syrup, with some fruit, rather than a thick fruit-filled bottom of a cobbler (crisp or crumble).

Moreover, a sonker can be made with sweet potato! To maintain the desired base, sweet potatoes are mixed with sugar to create a syrupy base when they are cooked.

Most agree on what the base should be, but there is debate around the topping. Some recipes call for biscuit dough, some pie dough, and some use breadcrumbs. While there is not a consistent idea of what type of dough to use, there is one consistent part of the topping – the dip.

The dip is a vanilla sauce that is drizzled over the top of the sonker before it is served. This is a unique trait to the sonker.

Basics of a Sonker

When you look up a recipe for a grunt you may think it is just a cobbler. Same fruit base. Same biscuit dough topping.

While the structure and ingredients in a cobbler and a grunt are the same, they are not cooked in the same way. Cobblers are baked in the oven. Grunts are steamed.

To make a grunt you need either a Dutch Oven or a covered cast iron skillet. The use of a covered Dutch Oven or skillet is where this dessert gets its name. As it slowly simmers steam often escapes through the lid and makes a “grunting” noise.

Basics of a Grunt

A slump is just a different name for a grunt. It has all the same ingredients. It is made in the exact same way. Instead of a name that describes the sound it makes while cooking, a slump describes what the dessert does on the plate.

Slumps or grunts are softer than cobblers. Since they are steamed, they do not have a firm golden topping. Therefore, when you transfer it from the Dutch oven (or skillet) to the plate, it slumps. Hence, the name.

All the desserts above have two things in common: fruit bottom and dough topping. Buckles flip that structure.

A buckle begins with a cake batter on the bottom of a pan. Then a layer of fruit is put on top of the batter. As it bakes, the cake rises and covers the fruit. The finished dessert usually has a middle point where the cake has “buckled” in the middle.

Since the cake is the base of this dessert an extra topping is sometimes added at the end. This is often a crumble or streusel topping.

Basics of a Buckle

A Betty is made with buttered breadcrumbs or cubes, rather than dough or batter. Moreover, while you can make a Betty with any type of fruit it is traditionally made with apples.

Basics of a Betty

If you'd like to test your newfound knowledge, give my nectarine cobbler, blackberry crumble, pear crisp, apple crisp, or blueberry buckle recipes a try! Don't forget to come back and let me know how they turned out! 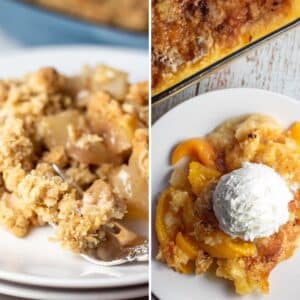 Did you know that cobblers, crumbles, crisps & buckles have many differences but also share many similarities? As fall rolls around and you start to see an influx of holiday and seasonal dessert recipes, will you be able to tell them apart? Well, we are here to fill you in on all things baked goods so you can differentiate between these 4 fruity desserts!
Author | Angela
Servings: 12 servings
Calories: 276kcal
Prep 30 minutes
Cooking 50 minutes
Total Time 1 hour 15 minutes
Pin Recipe Share on Facebook