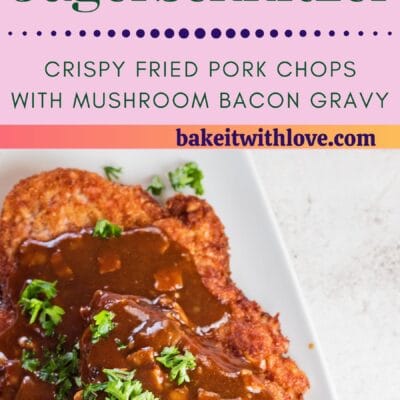 The classic German Jägerschnitzel combines tender, crispy-fried breaded pork cutlets served with a deliciously rich bacon mushroom gravy! This is truly a hearty pork entree that the whole family will love any day of the week!

Do you have any of those old family recipes that you just love to make when you need a taste of home? This perfectly crispy Jagerschnitzel is one of those recipes for me!

Jagerschnitzel has a double effect for me as it also reminds me of Gustav's, one of my favorite restaurants in Portland, Oregon. My Pacific northwest nostalgia kicks in and I seriously crave some schnitzel and Gustav's heavenly Swiss cheese fondue with smoked beer brats or a chewy Bavarian pretzel! Yum!

Schnitzel has many names throughout many countries! Your basic schnitzel is a thin cut of meat that has been fried. It can be made using beef, chicken, mutton, pork, turkey, or veal.

When we're talking about Jagerschnitzel, it is a pork cutlet that has been breaded and fried then served with tasty mushroom gravy. The closely related Weiner Schnitzel of Austria and Germany is a geographically protected (designation of origin) recipe that is only made with veal.

Don't forget that 'traditional' and 'authentic' recipes are just as varied as saying you have the 'authentic' apple pie recipe! There are as many versions of each as there are our wonderful Grandmas that make them!!

*Be sure to see the recipe card below for ingredients, amounts & instructions!*

When making Jagerschnitzel, you'll want to start your gravy first. Finish the gravy and leave it warming while you move on to preparing a dredging station for frying the boneless pork chops or pork steaks.

Preparing Your Pork Cutlets for Schnitzel

Tenderizing your pork cutlets ( either pork steaks or pork chops ) is optional. Once upon a time, the wild boar meat that the hunters brought in from hunting forays was tough and chewy. Modern-day meat practices yield tender cuts of meat, including the pork that we are using here!

I've used pork shoulder steaks here in this recipe. They're close to a ¼ inch in thickness so I have left them as-is. The beautifully marbled pork meat is absolutely tasty and wonderfully tender when done so I have not tenderized the pork cut. *I picture a certain blond, spikey-haired celebrity chef freaking out about meat being tenderized when I consider doing this.

To tenderize your pork chops, place your butterfly-cut pork between two sheets of plastic cling film wrap. Use the smooth side of a meat tenderizer and gently pound the pork cutlet gently until the desired thickness is achieved.

If your pork cuts ended up being a bit over ¼ inch in thickness, they can be transferred to a parchment paper-lined baking sheet. Cook at 350ºF (175ºC) for 5 - 10 minutes, or until they have an internal temperature of 145ºF (63ºC) as read by a digital meat thermometer.

Warm the readied gravy if needed and serve over the fried schnitzels for your delicious jägerschnitzel dinner!

🇩🇪 What To Serve With Jaegerschnitzel {German Side Dishes} 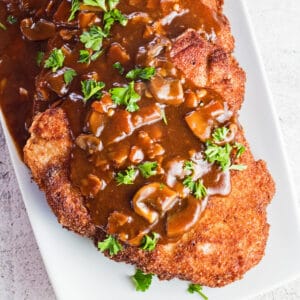 Print Recipe Leave A Comment
Love This Recipe?Click On A Star To Rate It!
4.86 from 14 reviews

If your pork cuts ended up being a bit over ¼ inch in thickness, they can be transferred to a parchment paper-lined baking sheet. Cook at 350ºF (175ºC) for 5 – 10 minutes, or until they have an internal temperature of 145ºF (63ºC) as read by a digital meat thermometer.