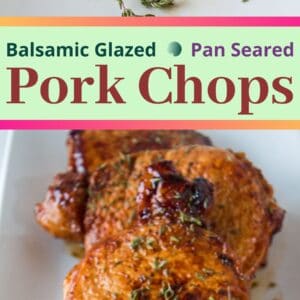 Try this sweet and tangy Balsamic Glazed Pork Chops Recipe when you're feeling the need for a pork chop dinner! This pan seared pork dinner is on the table in no time and super easy to make! 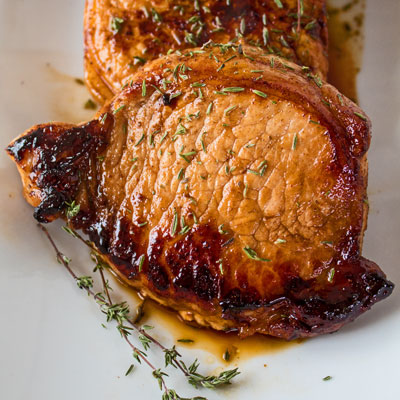 These fantastic flavored pan seared pork chops are super easy to make and cook up in no time for a great dinner even on busy nights!

I don't know what it is lately, as I have never been a fan of mustard (and still don't want it on my food) but I am loving mustard mixed into my glazes and gravies these past few months. Especially with pork...pork chops, pork medallions, pork loins.

You name it, I want to incorporate some mustard into the meal. And I love the tangy flavor of Balsamic vinegar, so it's the star of the marinade and glaze!

Start off by making the marinade and glaze. In a bowl large enough to hold all four of your pork chops, combine the olive oil, Balsamic vinegar, brown sugar, coarse ground Dijon mustard (we used the German stone ground mustard by Ingelhoffer), minced garlic, smoked paprika, salt, and pepper.

Stir all of the ingredients together until well combined, then place the pork chops in the marinade and refrigerate for at least thirty minutes. Several hours of marinading is better, but the shorter half hour works in a pinch. 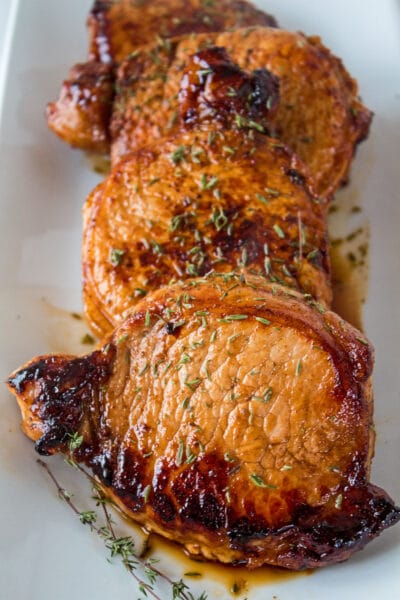 Heat oil in a large skillet or frying pan to medium high heat and fry the pork chops, cooking them for about 3 - 4 minutes per side until starting to get a caramelized browned color ( on top of the brownish color they have taken on from the marinade ).

Set the marinade aside until both sides of the pork have cooked, then add the marinade into the pan or skillet over and around the pork chops.

Cook the pork chops with the glaze for an additional 3 minutes. The sauce should only thicken slightly.

Remove the pork chops from the pan and serve immediately, pouring the glaze over the chops when serving, if desired. 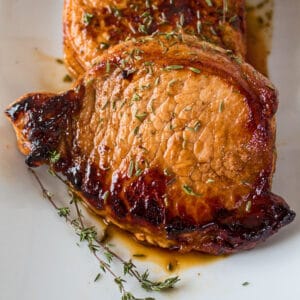 Print Recipe Leave A Comment
Love This Recipe?Click On A Star To Rate It!
4.6 from 5 reviews