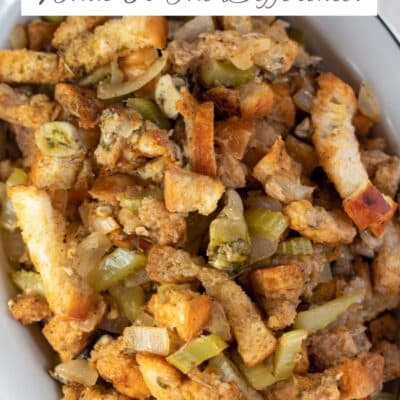 Stuffing vs dressing: is there actually a difference between the two or are they two different names for the same dish? In this post, I'm going to break down all of the differences and similarities. Plus, you'll even get some tasty recipes to go with it!

We all know and love stuffing (and dressing) and commonly think of these tasty side dishes when the holidays roll around. However, if you've ever sparked up the discussion of whether you're chowing down on some stuffing or dressing, you may be wondering if there actually is a difference.

Let me just say that, while there is technically a difference between the two, it is much more of a linguistic feud (like 'pop' vs 'soda') instead of an actual discussion of the dish itself. So, do you prefer to call it 'stuffing' or 'dressing'?

It is not uncommon for the terms 'stuffing' and 'dressing' to be used interchangeably. In fact, they do contain the same assortment of ingredients: herbs, spices, vegetables, and some sort of starch or bread.

Whether you're a pro at hosting Thanksgiving dinner and holiday parties or giving it a try for the first time this year, you're sure to find my ultimate guide to planning Thanksgiving a help! Don't forget to safely thaw your holiday turkey early too!

In all actuality, the true difference simply comes down to how the dish is cooked rather than the ingredients or recipe itself.

Dressing, on the other hand, features all of the same ingredients. However, it is baked in the oven in a separate casserole dish (as opposed to baking inside of the turkey).

Who Says 'Stuffing' Or 'Dressing'

Here lies the real difference between stuffing and dressing: the region in which you live. In fact, the country is pretty divided on which term to use.

In the North, you will probably attend a Thanksgiving feast that features a tasty side of stuffing. On the other hand, if you head down South, you'll probably be enjoying some dressing.

Even if the dish was baked inside of the turkey (making it technically stuffing), people in the South are still likely to refer to it as dressing. Just like people in the North are going to call it stuffing, even if it was baked in a casserole dish.

Therefore, the terms are used completely interchangeably. In fact, it is more of a regional difference, regardless of the baking method used.

Now you know the true differences between stuffing and dressing. Leave a comment down below and let me know if you like to call it stuffing or dressing! 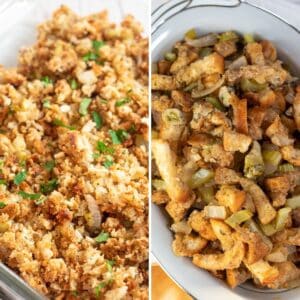 Stuffing vs dressing: is there actually a difference between the two or are they two different names for the same dish? In this post, I'm going to break down all of the differences and similarities. Plus, you'll even get some tasty recipes to go with it!
Author | Angela
Servings: 8 servings
Calories: 337kcal
Prep 5 minutes
Cooking 35 minutes
Total Time 40 minutes
Pin Recipe Share on Facebook

bakeitwithlove.com/about/
« How Many Chocolate Chips In A Cup
Oyster Dressing »