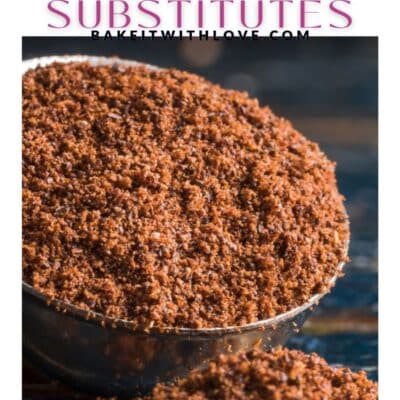 If you need a ground cloves substitute, check out this list of all of the best options to replace cloves and still have the perfect dish! Whether you've run out of ground cloves or just want to try out something different, I have plenty of ideas for you to choose from. There's no need to run to the store if you have one of these alternatives already in your spice cabinet!

Ground cloves are the powder form of whole cloves. Cloves are a warm baking spice and are often used in both sweet and savory recipes. Whether the dish is served hot or cold, ground clove has a way of heating it, in a good way!

Cloves are often used in smoothies, curry dishes, pies, and marinades. If your recipe calls for ground cloves, but you have run out, the following spices can be substituted, with an equally satisfying flavor!

Whole cloves can easily be substituted for ground cloves since they are essentially the same thing but in different forms. You can either grind the whole cloves into ground cloves using a grinder or add them whole.

This will give your dish the same flavor, but it may alter the texture a bit. Because whole cloves can be off-putting, you may want to strain them out of the final dish before serving.

Allspice is often paired with cloves in many dishes, so many people recognize it in combination with cloves in dishes such as baked apples, tender brisket, and spice cakes.

This spice can be whole or ground, but I recommend ground allspice when substituting for ground cloves because they can be measured evenly.

Use allspice in a 1:1 substitution for ground clove.

Nutmeg is another warm spice that is one of the most similar flavors, comparable to ground cloves. The flavor is bittersweet with hints of nuttiness. It can be used in any recipe that calls for ground cloves, including pies, drinks, casseroles, marinades, sauces, and soups.

Use nutmeg in a 1:1 substitution for ground clove.

Cinnamon is my favorite spice. I consume it every day, often in multiple ways. Ground cinnamon can be added to coffee, smoothies, rice, meat dishes, soups, and much more!

Cinnamon is a great ground cloves substitute, especially because it is often a staple in every chef's kitchen!

Use cinnamon in a 1:1 substitution for ground clove.

Cardamom is a unique spice that may not be as widely known to people because of its hefty price tag, but it is another warm baking spice that can be a great alternative to ground clove. It is a tasty addition to both sweet and savory recipes, one of my favorite being homemade curry!

You can use cardamom in a 1:1 substitution for ground cloves, however, it is best when combined with cinnamon (or nutmeg). Use ½ teaspoon each of cinnamon and cardamom, or cardamom with nutmeg, to make 1 teaspoon ground cloves substitute.

Mace is a really interesting spice as it is technically a part of nutmeg. The ground mace that we use in our recipes is the outer hull or casing around the nutmeg seed (that is dried and sold whole or ground).

The nutmeg fruit is a stone fruit, so the actual mace layer is wrapped around the pit and looks like it could all just be the seed. Whoever dried it out and tried using at a spice is sheer genius. 🙂

Use ground mace in a 1:1 ratio to substitute for ground cloves in any recipe, sweet or savory.

This blend is robust and perfect for any recipe that calls for ground cloves. Add pumpkin pie spice to donuts, iced coffee, curry, or lamb dishes.

Use pumpkin pie spice in a 1:1 substitution for ground cloves.

Just like my tasty pumpkin pie spice, my fabulous apple pie spice blend works wonderfully in any recipe that calls for ground cloves. This classic staple of apple pies combines cinnamon, nutmeg, allspice, cardamom, and a couple of optional ingredients including ground cloves and ground ginger.

Use apple pie spice in a 1:1 substitution for ground cloves.

Star anise is both fragrant and delicious. It is added to many recipes around the world because it is a widely used spice in the culinary space.

Star anise is warm, and mild, with a hint of licorice. It is quite similar to cloves and can be used whole or ground.

Use star anise in a 1:1 substitution for ground cloves.

Fennel is a great ground clove substitute because it has a bold flavor that is easily distinguishable and adds a deep layer of deliciousness!

Use ground fennel seeds in a 1:1 substitution for ground cloves.

Five spice powder is a blend of spices such as cloves, cinnamon, fennel, star anise, and peppercorns. This blend is warm and nutty with a bold licorice flavor that most people love when cooking anything with clove or fennel.

Chinese five spice powder is also known to have turmeric, cardamom, and nutmeg which makes it perfect for curry and rice dishes.

Use five spice powder in a 1:1 substitution for ground cloves.

While no two spices taste exactly the same many spices can be used interchangeably to enhance a dish. As long as you use similar spices with equal profiles, your dish should have a taste range that is equally as delicious as if the original spices were being used!

Have you ever been out of ground cloves and used a different spice in its place? I would love to hear about which spice you chose and how it turned out in the comments below! 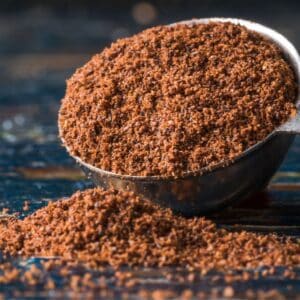 If you need a ground clove substitute, check out this list of all of the best options to replace cloves and still have the perfect dish! Whether you've run out of ground cloves or just want to try out something different, I have plenty of ideas for you to choose from. There's no need to run to the store if you have one of these alternatives already in your spice cabinet!
Author | Angela
Servings: 1 serving
Calories: 1kcal
Prep 2 minutes
Cooking 0 minutes
Total Time 2 minutes
Pin Recipe Share on Facebook

*Nutritional information is calculated for the whole cloves only.