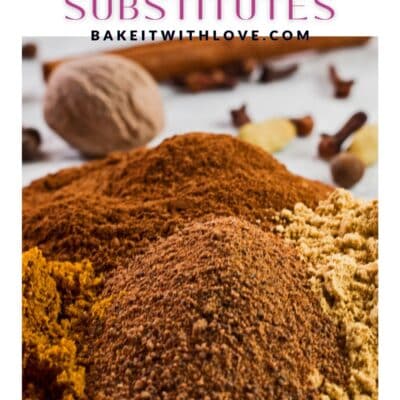 Pumpkin – the official flavor of fall. From pumpkin pie to pumpkin bars and even a pumpkin latte – nothing tastes quite like fall (except maybe apples, but that’s a debate for another time).

Many of the pumpkin-flavored favorites wouldn’t be the same without pumpkin pie spice. This special blend of several fall favorites creates the ultimate fall flavor. If you find yourself without this special spice though, don’t worry. There are several wonderful and easy pumpkin pie spice substitutes!

Moreover, while many people love the complex flavor blend of pumpkin spice, some prefer a simpler flavor. Therefore, you may choose to skip the blend and opt for a single favorite spice as a substitute. Whatever you choose, these spices are sure to give you a full fall flavor that is perfect for you!

What is Pumpkin Pie Spice?

The most common spices found in this blend are cinnamon, ground ginger, number, ground allspice, and ground cloves. This blend can vary from brand to brand. However, most brands include at least 2 to 3 of these main spices. In addition, some blends will add cardamon.

Cinnamon is the primary spice in Pumpkin Pie Spice. Therefore, it is the best single spice to use as a substitute. Moreover, it is one of the most common spices to have on hand – making it an easy substitute when you are in a pinch.

Using cinnamon on its own will provide the familiar warm fall flavor that most of us associate with pumpkin treats. However, while cinnamon is the primary flavor found in a pumpkin pie spice blend it can be overpowering on its own.

To avoid adding too much fall flavor, start with half the amount of cinnamon  (½ teaspoon of cinnamon = 1 teaspoon of pumpkin pie spice). Do a quick taste test and then add more cinnamon if desired or needed.

Cloves are another spice found in a pumpkin spice blend. They have a distinct flavor that many people associate with pumpkin pie and other similar desserts.

In addition to their distinct flavor, they are quite strong. Therefore, you will want to use a small amount. Especially if you are using them on their own.

For the best results, combine cloves with another spice like cinnamon.

The warm flavor of nutmeg reminds many people of fall and holiday flavors. It is especially popular around Thanksgiving and Christmas as a topping for warm drinks like eggnog. It is also commonly found in pumpkin pie spice.

Like cloves, nutmeg is quite powerful. A little goes a long way!

The last of the standard spices in a pumpkin pie spice blend is ginger. While ginger is a common spice in this blend it has a different flavor profile than cinnamon, cloves, and nutmeg.

It leans more towards a brighter citrus flavor profile that is less earthy. However, it still has familiar warm flavor elements.

Unlike the other spices that help enrich the warm flavors though, ginger adds a distinctly new flavor. Therefore, if you use too much it can quickly overpower and change the flavor of the recipe.

Ginger is best used in support of other spices. If you only have access to ginger though you can use a small amount to boost the flavor of your recipe. Start with ⅛ to ¼ serving (⅛ teaspoon or ¼ teaspoon = 1 teaspoon pumpkin pie spice).

If you are looking for a single spice substitute that offers a more complex flavor, then consider allspice. Despite sounding like it is a blend of several spices, allspice is one single spice. It is described as tasting like a blend of cinnamon, number, cloves, and pepper.

This spice comes from the dried berry of a pimento tree. While these trees are native to Jamaica and Central America, allspice is used worldwide. It is especially popular in India and the Middle East.

Allspice is a good substitute for pumpkin pie spice when you want to enrich the warm earthy notes of a dish. It can work in both sweet and savory dishes. However, its strong flavor lends itself to savory dishes.

While each of the individual spices found in pumpkin pie spice can be used independently from one another, they are best used when combined.

If you have all the spices mentioned above, you can jump below to the recipe to make your own DIY Pumpkin Pie Spice blend. However, if you only have two to three spices available you can follow the suggestions below for a simpler pumpkin pie spice blend substitute.

Black peppercorns lend a more earthy taste that resembles the flavor profile of allspice. Combined with cinnamon you get a pungent and warm flavor that is great for savory dishes.

To enrich the pumpkin flavor of a recipe you can use actual pumpkin seeds! Roasted pumpkin seeds work best as they are dried and easy to grind.

If you want a heavier cinnamon taste, then swap the ratio for 2 parts cinnamon and 1 part pumpkin seeds. Still use the mixture in a 1:1 substitute for pumpkin pie spice.

Star anise is not commonly used in a pumpkin pie spice blend, but it has a similar earthy flavor to the other spices used. However, it is less common to have it in your spice cabinet. If you do have access to star anise it is a wonderful substitute!

The rich flavor of unsweetened cocoa powder is a fun way to add a new flavor to your fall recipes. While it is not specifically pumpkin in flavor, when mixed with cinnamon it lends a rich warm flavor.

Keep in mind that even in small quantities though it will add a bit of chocolate flavor to your dish.

Remember that these two spices are quite pungent on their own. To keep from overpowering your recipe follow the ratio of ⅓ allspice in place of 1 serving of pumpkin pie spice: ⅓ teaspoon = 1 teaspoon. Then add just a bit of ginger (⅛ teaspoon to ¼ teaspoon).

The addition of a pinch of ginger to cinnamon enhances the flavors of both. The result is a more complex flavor that is closer to the blend of pumpkin spices.

Use the suggested ½ serving of cinnamon in place of 1 serving of pumpkin spice: ½ teaspoon cinnamon = 1 teaspoon pumpkin pie spice. Add a bit of ground ginger: between ⅛ to ¼ teaspoon.

If you don’t like cinnamon but want the flavors of fall, then cloves and nutmeg are the best combination. These two spices are quite strong though, so you want to start with about half a serving as a substitute.

If you have all the primary spices found in a pumpkin pie spice blend, then you can make your own! Follow the ratios below to create your perfect pumpkin spice at home.

Simply combine all the ingredients and whisk them together. Then keep your homemade pumpkin pie spice blend in an airtight jar or container. Use in any recipe that calls for pumpkin pie spice.

We hope one of these spices or spice blends meets your needs! Don't forget to come back and let us know which pumpkin pie spice substitute you chose and how your recipe turned out! 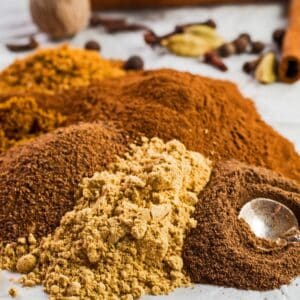