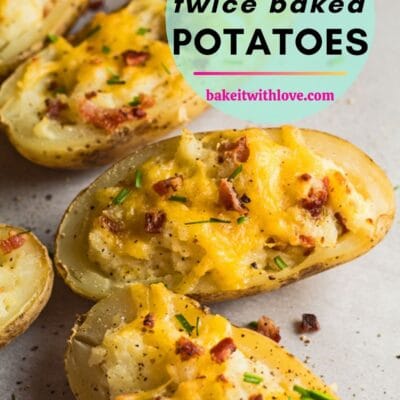 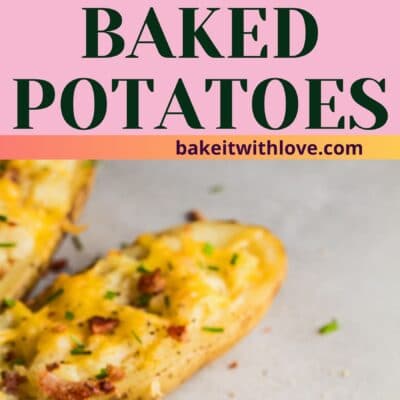 This family favorite twice baked potatoes recipe makes the ultimate loaded baked potatoes that are full of flavor and overflowing with sour cream, ham, bacon, cheese, and more! They're easy to make, and a great side dish to make in advance or have in the oven while you are busy with other cooking! 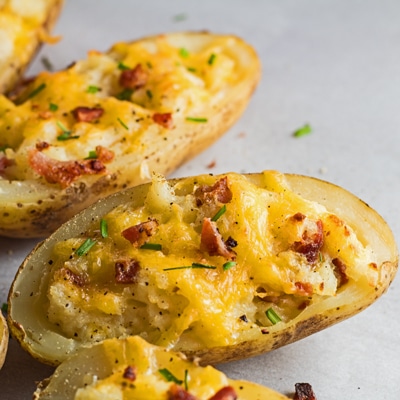 These easy to make ultimate loaded stuffed potatoes are simply the best way to enjoy potatoes! Especially if you love cheese and bacon and food you can make in advance, and what's not to love about all of that?!

Prep these intensely yummy potatoes and set them in the refrigerator until you're ready to make dinner for a super-fast side dish. This makes holiday meals easy too, as your stuffed twice baked potatoes can be made a day in advance and just popped into the oven after your amazing prime rib roast is finished and resting!

Plus, in a pinch, a fully-loaded twice baked potato works as a quick meal! I've been known to make big batches with some super-sized russet potatoes and save each halved and filled potato skin in the freezer for ready-to-eat individual servings.

How To Make Twice-baked Potatoes

Making your twice baked potatoes takes just a few simple steps and deciding what you want in your mashed potato filling! Preheat your oven and get ready to enjoy this tasty potato side dish!

I've included some of my standard ingredients in this recipe. Gather the following ingredients to get your potatoes started:

From here there are many other optional stir-ins that could be included! Things like chopped broccoli or cauliflower, tasty horseradish, blue cheese, pesto, chicken, cooked ground beef, or mixed vegetables.

To bake the potatoes the first time, preheat your oven to 450 degrees F (232 degrees C) and wash your large russet baking potatoes. The potatoes can be cooked in the microwave to make this first step fast and easy, but the skins won't be as crispy!

( Optional ) Fork each potato three to four times so the potatoes can "vent" and pull off squares of aluminum foil to wrap each potato in. Set the potatoes in the center of the aluminum foil squares and (optional) drizzle with olive oil and sprinkle with a coarse grain salt.  I love using Himalayan salt or sea salt for this!

Bake the potatoes for about 1 hour 15 minutes, or until they are soft when squeezed. My husband likes very crispy potato skins, so if I haven't drizzled the potatoes in olive oil I will usually take them out of the aluminum foil and bake for the last 15 minutes or so without being wrapped.

Allow your baked potatoes to cool slightly before handling them. *The mash is easiest to work with while the potatoes are still warm.

Once the potatoes have cooled enough to hold, scoop out the insides into a medium-sized mixing bowl. Be careful not to get too close to the skin, as it will tear easily. Add 1 stick softened butter, milk, and sour cream then combine with a hand mixer or masher.

Stir in diced, cooked ham and cheddar cheese as well as salt and pepper for seasoning then spoon into the hollowed-out baked potato skins. Top with bacon, chives or scallions, and more cheese if desired, and place in a buttered or greased 9 x 13 baking dish. 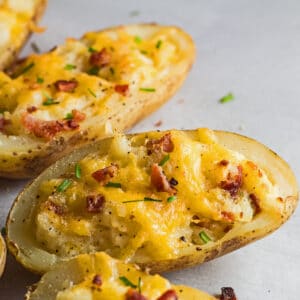 Baking the Potatoes (the first time)