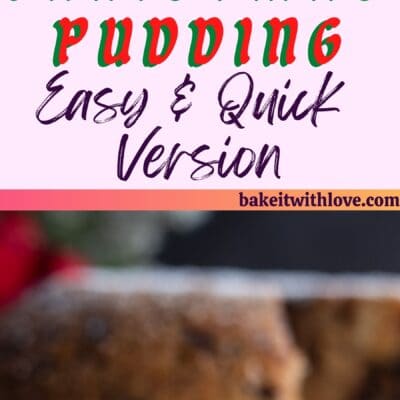 My decadent, easy-to-make British Christmas Pudding is a perfect holiday dessert that's been lightened up so you can make it in half the time! It’s a moist, cake-like base filled with sweet spices and dried fruit that your family is sure to love this holiday season!

Delicious, sweet, and filled with Christmas cheer – you and your family will love my British Christmas pudding!

If you’re a fan of moist, delicious Christmas cakes, you’ll love this tasty British Christmas Pudding! It’s a UK classic, filled with dried fruit and warm spices, and other amazing ingredients steamed to perfection! It really creates a moist dessert like no other!

My British Christmas pudding recipe is surprisingly easy too! It takes just 15 minutes to prepare, and the rest of the time is spent steaming the pudding – so it’s super hands-off! That’s perfect for the busy holiday season!

My British Christmas pudding is not a standard “pudding” like you might think, but it’s a moist, super tender, cake-like dessert. Steamed puddings like my Christmas pudding have a treasured history in the UK as a part of holiday celebrations!

You may have also heard it referred to as 'figgy pudding' or 'plum pudding'. Even though it's old-school, Christmas puddings are still a must-have on many holiday tables.

❤️ Why You'll Love This Recipe!

It's Super Fast And Easy! Make this traditional Christmas dessert in less than half the usual time (8 hours of steaming, then chilled overnight)!

It’s Unique! Steaming a dessert may not be something you’ve tried before, but I highly recommend it! It’s a great way to make sure you never have a dry cake!

It’s Delicious! Whether you eat it on its own or paired with a sauce, this easy Christmas pudding is truly a delight to the tastebuds!

My British Christmas pudding uses a lot of pantry staples! You may have to look for mixed spice, or you can make my super easy recipe any time you need it!

If you truly aren’t a fan of raisins, but still want to make the pudding—try chopped dates, apricots, cranberries, cherries, or other dried fruit that you prefer!

To make your own self-rising (self-raising) flour, measure out 1 ½ teaspoons of baking powder then finish filling 1 cup with your all-purpose flour. Whisk the flour and baking powder together thoroughly before using. I suggest sifting twice for best results.

This is a traditional steamed British pudding, which sounds a bit unconventional – but it’s delicious! Steaming the pudding keeps it wonderfully moist!

My decadent, impressive British Christmas Pudding is such a perfect dessert! You can serve it as is, with a scoop of ice cream, a dollop of whipped cream, or if you want to get really fancy - try serving it with a warm toffee sauce, butterscotch, or crème anglaise. Enjoy!

If you want to stir-in some extras, try nuts or grated apple!

You’ll want to grate the butter, so it incorporates properly into the pudding!

White bread can also be used for breadcrumbs!

If you have leftovers of this gorgeous, rich pudding, you can transfer the leftovers to an airtight container and then refrigerate for up to two weeks. For best quality and flavor, enjoy your British Christmas pudding within the first 1-5 days.

You can definitely freeze British Christmas pudding too! Scoop or slice individual portions and wrap tightly with plastic cling film.

Then, put them into a large freezer storage bag and it’ll keep for up to 6 months. Defrost in the fridge overnight.

Why is this dessert steamed?

This old-school, classic British dessert was traditionally steamed because it was an easy way to cook a large cake-like dessert and keep it moist and delicious! It may seem odd to us Americans, but it’s really so tasty!

What is mixed spice?

Mixed spice is a combination of baking spices that is popular in the UK, especially for holiday desserts. It is also sometimes known as “cake spice,” “baking spice,” or “pudding spice.” It adds a warm, delicious spiced flavor that elevates any dessert recipe! In my recipe, I like to mix a blend of allspice, cinnamon, nutmeg, mace, cloves, ginger, coriander, and sometimes dried orange peel! 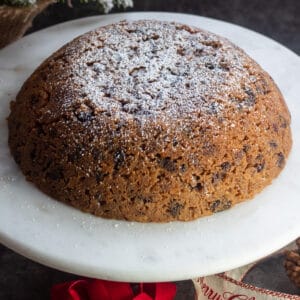 Print Recipe Leave A Comment
Love This Recipe?Click On A Star To Rate It!
4.86 from 7 reviews

My decadent, easy-to-make British Christmas Pudding is a perfect holiday dessert that's been lightened up so you can make it in half the time! It’s a moist, cake-like base filled with sweet spices and dried fruit that your family is sure to love this holiday season!
Author | Angela
Servings: 10 servings
Calories: 438kcal
Prep 15 minutes
Cooking 2 hours 30 minutes
Total Time 2 hours 45 minutes
Pin Recipe Share on Facebook