These easy to make homemade hash browns are super tasty and can be cooked until soft and tender, or nice and crispy! This classic breakfast potato side dish is just as easy to make from scratch as any pre-shredded hashbrowns! 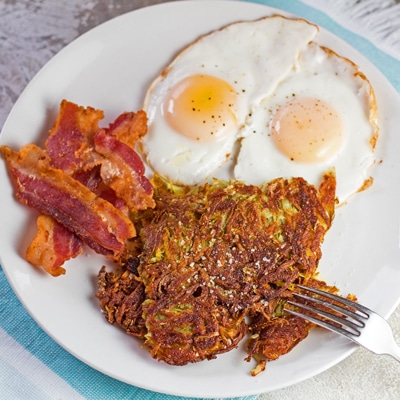 Super tasty homemade hash browns are easy to make for your favorite breakfast side dish!

Those fantastic breakfasts that I used to enjoy at my Grandma's beautiful family home were frequently served with these homemade hash browns. There's a reason the potato is such a popular side dish, and that's because it is as delicious as it is extremely versatile!

When making my hash browns from scratch, I usually rinse and squeeze the water and starch from my shredded potatoes. By removing the starch you will end up with a cafe style crispy hash brown potatoes!

How To Make Hash Browns from Scratch

This simple recipe starts with raw russet potatoes to make crispy breakfast hash browns. For four to six servings, grate up four russet potatoes ( or more for small potatoes including red potatoes ) and you can easily use more or fewer potatoes depending on how many people you are serving. 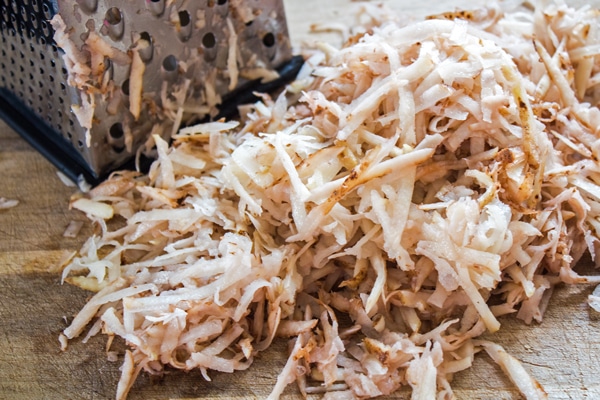 I like to put all of my grated potatoes into a bowl of cold water, then move the bowl to the sink and grab handfuls of potatoes to squeeze out until I have gone through and squeezed all of the potatoes so that they are free of excess moisture and starch.

After they have been squeezed, I place the potatoes on a plate with paper towels and pat them dry. Set the grated potatoes aside until ready to portion them into your frying pan.

Using a large frying pan or skillet, heat your olive oil to medium to medium-high heat. *Depends on your stove settings, you want to see the oil shimmering and really warm but not so hot that the oil will 'spittle' and spatter oil everywhere when the shredded potatoes are added.

KEY STEP: Be sure to allow the oil to get hot! Don't add the potatoes before the oil is fully heated, as otherwise, they will just absorb the cooking oil.

Then place the hash browns into the pan in an even layer or rounded 'patties'.  Be careful not to get splashed by the oil.

Add salt, pepper, and dried chives for seasoning and cover. *Paprika, Garlic Salt, Turmeric, Onion Powder are all really good base spices to season your hash browns with. 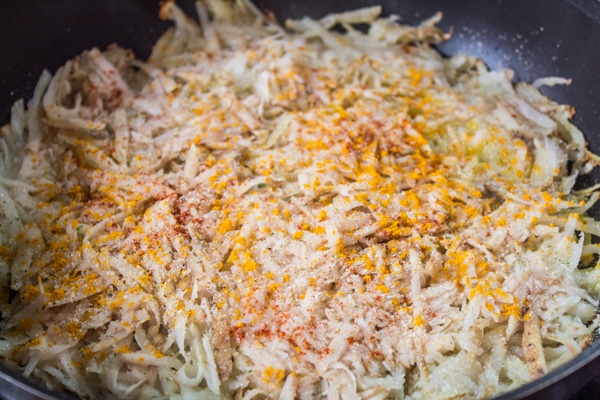 Uncover and turn the hash browns over. Split the hashbrowns ( if in a single layer and not patties ) into manageable sizes for flipping. If you can flip half, then split the pan of hashbrowns in half. Otherwise, split the portions into quarters for ease of flipping the hash browns at the halfway point in cooking.

Top with the optional cheese and let the hash browns fry uncovered for 5 to 7 minutes, or until they reach your desired level of 'crispiness'. Enjoy! 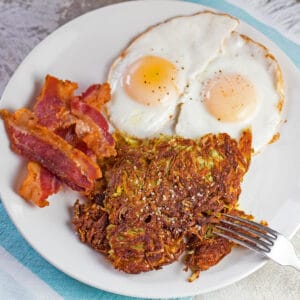 These easy to make homemade hash browns are super tasty and can be cooked until soft and tender, or nice and crispy! This classic breakfast potato side dish is just as easy to make from scratch as any pre-shredded hashbrowns!
Author | Angela
Servings: 4 servings
Calories: 345kcal
Prep 10 minutes
Cooking 10 minutes
Total Time 20 minutes
Share on Facebook

Love This Recipe?Click on a star to rate it!
5 from 1 vote