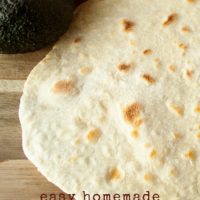 Oh my gosh! If I had known how easy and delicious this homemade flour tortillas recipe is when I was younger, I would've been making these for decades now rather than using store bought flour (or corn) tortillas. 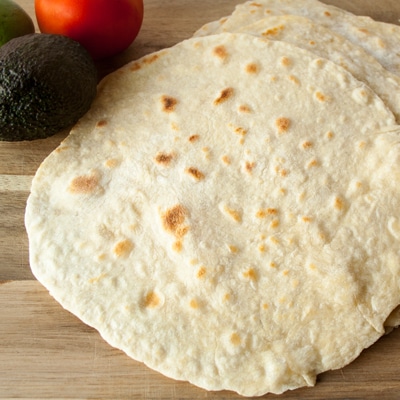 So easy and delicious! These homemade flour tortillas are a real treat for taco night!

Seriously, the flavor difference is amazing...so much so that once you make your own flour tortillas you simply won't want to settle for anything less than the absolute freshness of handmade tortillas that you have made at home!

Most likely, you will have all of the necessary ingredients on hand (with the possible exception of lard) as all that is required is flour, salt, baking powder, water and lard.

With just these 5 simple ingredients you can take your Mexican dishes to a whole new level with these super easy to make flour tortillas!

There is also something to be said for quite literally making something by hand (although you can use a food processor or stand mixer to cut in the lard, and gradually add the water). The whole family has found that we really do enjoy making these tortillas by hand, rather than any other method.

If you love your Mexican dishes and family taco nights as much as we do, you will love adding this homemade flour tortilla recipe to any Mexican themed dinners (and they will be in demand)! 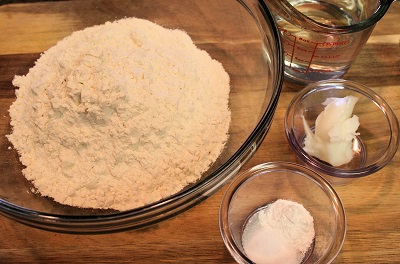 What Can I Substitute For Lard?

Vegetable oil is another alternative to using lard, and when I do use vegetable oil I add in the tablespoon portion then slowly add additional vegetable oil as needed in teaspoon size portions. Typically, the vegetable oil method requires 2 tablespoons to reach my desired consistency of the homemade flour tortillas dough.

How To Make Homemade Flour Tortillas

When the bottom side has golden brown spots, flip and cook the other side.

About 1 minute on the first side and 30 seconds to a minute on the second side. Voila! Perfect homemade flour tortillas that are soft enough to roll into burritos and enchiladas, yet sturdy enough to stuff full of your favorite taco fixins!!

Since we used all of our tortillas in this video for making enchiladas, there was no need for a tortilla warmer. If you do not have a tortilla warmer, you can also make a 'pouch' with aluminum foil to keep your freshly cooked homemade tortillas nice and warm before serving dinner. 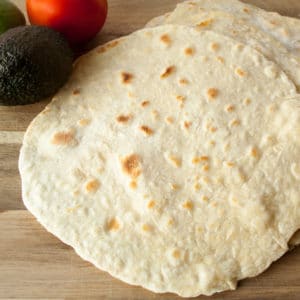 Print Recipe Leave A Comment
Love This Recipe?Click On A Star To Rate It!
4.8 from 5 reviews