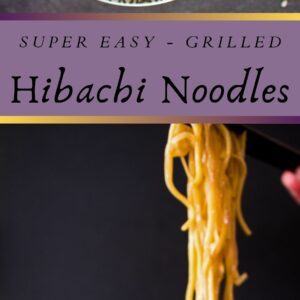 Hibachi Noodles are an easy-to-make Hibachi dish that's always a family favorite! They're incredibly delicious when cooked to perfection at home! Sear these tasty noodles off using a grill top griddle after cooking your meats so that the noodles pick up that 'just grilled' taste from your hibachi chicken, beef, or seafood!!

If you don't know just how addictive these grilled Hibachi Noodles are yet, you really are missing out! I'm a big pasta fan anyway, but hibachi noodles are extra special coming straight off a grill and coated in a rich, buttery, silky smooth sauce flavored with soy and teriyaki sauce. Plus a drizzle of my favorite addition, mirin.

The cooking experience is one of the most memorable parts of dining at a Japanese steakhouse, but the next best thing is making these hibachi fried noodles at home!

Make your homemade hibachi noodles a meal by grilling your favorite vegetables and a protein, then tossing with the noodles for a loaded noodle bowl! My family's hibachi grilling night usually includes either these perfect grilled noodles or hibachi fried rice, plus some hibachi vegetables and one of the three staples here in our home (steak, chicken, pork, or shrimp).

❔ What Are Hibachi Noodles?

Hibachi noodles are those fabulous soft, fried garlic noodles served at Japanese steakhouse restaurants like Benihana, Kyoto, and Kobe (as well as MANY other local hibachi and teppanyaki-style Japanese restaurants where the foods are grilled tableside).

The noodles (or rice, or vegetables) are cooked near your desired protein on the grill which picks up some of the flavors and meat juices from cooking on the same grill!

The base cooking oil used by hibachi chefs is a combination of 4 basic ingredients. Hibachi cooking oil is made with sesame seed oil, olive oil, rice cooking wine, and soy sauce.

Combine the oils, rice cooking wine, and soy sauce in a sealable container such as a jar or squeeze bottle for ease of storage and use. Shake to combine before using.

If you don't have sesame oil on hand, you can read all about the best sesame seed oil substitutes in my guide here!

Cook your chosen pasta noodles until al denté in texture. Drain and rinse, then drizzle with sesame seed oil. Season with a few turns of your fresh black pepper grinder (or a pinch of ground pepper) and toss the noodles to coat evenly. Set aside.

After working through preparing many servings of my hibachi noodles, I am finally sharing my best recipe! This is as close as I have gotten to 'authentic' hibachi noodles, authentic in this case being as close to my favorite Japanese steakhouse's just-fried noodles.

🍜 What Kinds Of Noodles Are Best For Hibachi Grilling?

Note that there is no one actual 'hibachi noodle' that you can purchase. The name 'hibachi noodle' comes from the style of cooking that is seen, usually cooked with quite a bit of flair displayed by the chefs (we had a chicken shape made out of egg for our daughter, that was chopped up and added to the hibachi rice).

Chinese Lo Mein noodles are a good substitute that is typically easy to find. Also, standard kinds of pasta such as Spaghetti, Linguine, and Angel Hair pasta can also be used.

Check out all of my fabulous hibachi recipes for making an incredible hibachi dinner night at home!

Refrigerate any unused hibachi noodles in an airtight container, for up to 3 days. They are best used within the first day or two, so I don't recommend serving after 2 days of being refrigerated.

A quick stovetop heating is the best way to reheat your hibachi noodles (as well as pretty much any take-out or homemade Chinese or Japanese style foods). Heat a large skillet or wok on high heat, use a touch of my hibachi cooking oil, and turn noodles for about 2 minutes or until heated through completely.

What Is A Hibachi?

A hibachi is a Japanese grill, called a shichirin. It is a small, portable, barbecue grill typically made with cast iron. Foods are cooked on a grate over an open flame, most commonly with charcoal as the heat source. U.S. hibachis are made for indoor cooking, so they will often times have an electric heating source rather than an open flame.

What's The Difference Between Hibachi and Teppanyaki Style Cooking? 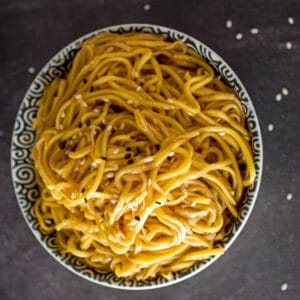 Print Recipe Leave A Comment
Love This Recipe?Click On A Star To Rate It!
4.99 from 182 reviews

Hibachi Noodles are an easy-to-make Hibachi dish that's always a family favorite! They're incredibly delicious when cooked to perfection at home! Sear these tasty noodles off using a grill top griddle after cooking your meats so that the noodles pick up that 'just grilled' taste from your hibachi chicken, beef, or seafood!!
Author | Angela
Servings: 8 servings
Calories: 320kcal
Prep 5 minutes
Cooking 5 minutes
Total Time 10 minutes
Pin Recipe Share on Facebook