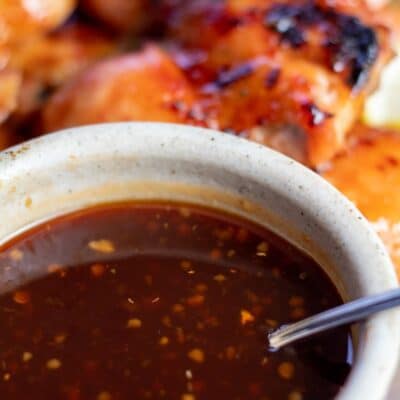 Huli-Huli sauce is a delicious Hawaiian BBQ sauce made with brown sugar, soy sauce, pineapple juice, and a few other key ingredients! This copycat teriyaki-style BBQ sauce is sweet, savory, and makes a perfect marinade for chicken!

This Hawaiian BBQ sauce is made with a delectable blend of sweet, savory, and salty ingredients! I made this recipe as a copycat of the beloved Hawaiian Huli-Huli sauce that is sometimes difficult to get your hands on depending on your location.

If you ever have the pleasure of visiting sunny Hawaii, you’ll see a version of this sauce mentioned on menus everywhere. It’s a signature flavor, and once you taste it, you’ll understand why!

With this recipe, you can make your own version of Huli-Huli Hawaiian BBQ sauce at home!

This sauce is pretty much a staple in Hawaiian households and has been growing in popularity here in the states. Have your own Hawaiian BBQ at home by slathering this sauce over pulled pork, grilled chicken kabobs, and more!

In 1954 a World War II naval officer named Ernest Morgado founded a poultry company with a chicken farmer in ‘Ewa, Hawaii.  At a meeting with farmers the following year, Morgado cooks up some BBQ chicken in a teriyaki-style sauce claiming it was his grandmother’s recipe.

Once Morgado noticed how popular the sauce was, he began making marinated chicken for charity fundraiser events. His BBQ chicken grew in popularity, raising thousands of dollars for local charities over the years!

Morgado has always said the name “Huli-Huli” was created by accident!

Morgado’s chicken was originally roasted on a spit that was turned regularly. “Huli” is the Hawaiian word for “turn” and spectators would often shout “huli huli” as the chicken cooked.

In 1967 Morgado and the Pacific Poultry Company trademarked the name “Huli-Huli”. The dish became a staple in Hawaii and could be found at most roadside stands, gas stations, and restaurants.

It wasn’t until 1986 that Morgado finally decided to bottle the beloved Huli-Huli sauce to be mass-produced and sold in stores!

❤️ Why You'll Love This Recipe!

It’s Versatile! Use it as a sauce or use it as a marinade, chicken, pork, even beef ribs, it can go with almost anything!

It’s Quick! Make your own delicious BBQ sauce in only 15 minutes!

It’s Flavorful! There’s a reason this sauce is so popular, the pineapple adds just the right amount of sweetness for a BBQ sauce unlike any other!

This recipe requires a handful of simple ingredients you should be able to find at your local grocery store.  I often keep frozen ginger cubes on hand for recipes such as this!

*Be sure to see the recipe card below for ingredients, amounts & instructions!*

This awesome sauce is ready in just 4 easy steps! This recipe will make 1 ½ cups BBQ sauce with 2 tablespoons per serving.

I recommend using this as a marinade and sauce for some boneless country-style pork ribs, or you could keep it traditional and serve it up on some grilled or baked Huli Huli chicken! Enjoy!

As mentioned above, allow the sauce to fully cool before storing. It can be kept in an airtight container in the refrigerator for up to 1 week.

I do not recommend freezing your homemade Hawaiian BBQ sauce.

🍶 Try Some of My Other DIY Sauces!

Can I substitute the pineapple in this sauce?

If you aren’t a fan of pineapple juice, or you’re allergic, you can substitute it for orange juice at a 1:1 ratio. It will change the flavor some, but it will still be delicious.

Where can I find Mirin at the grocery store?

Mirin is usually on the Asian foods aisle near the soy, tamari, and teriyaki sauces (as is the chili sauce).

What do I do if my Hawaiian BBQ sauce gets too thick?

If you over-boil your sauce and it reduces too much, you can thin it out by whisking in some broth! 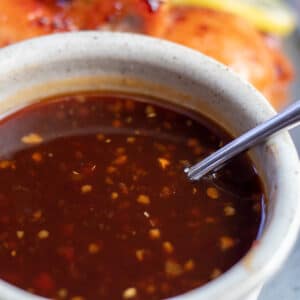 Print Recipe Leave A Comment
Love This Recipe?Click On A Star To Rate It!
5 from 54 reviews