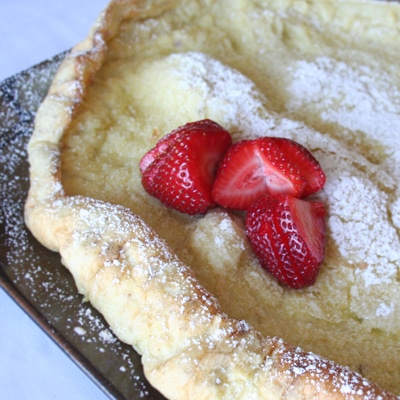 The perfect breakfast any day of the week, my favorite, Dutch Baby Pancakes!

Try this recipe out and thank me later, no need for a mixer or anything special to make Dutch babies from scratch...they are quick, fun to make, and truly addictive!! ~ And a huge 'thank you' to my Mom for addicting me to these at a young age 🙂

Start by placing a 10 inch cast iron skillet into the oven while preheating to 475 degrees F (245 degrees C).

In a medium to large mixing bowl, beat the room temperature eggs until light and fluffy.

Add the milk, vanilla extract, salt, nutmeg, and cinnamon then stir to combine.

Whisk in the flour gradually until all of the flour is incorporated and the batter is smooth.

Remove the heated cast iron skillet from your preheated oven, reduce the oven temperature to 425 degrees F (220 degrees C) and add the butter into the skillet.

Melt the butter, making sure to swirl the butter throughout the pan and along the sides so that the entire surface is coated to prevent the Dutch Baby from sticking. Pour all of the batter into the hot skillet and then place the skillet back into the oven. Bake for 12-15 minutes until puffy, bubbly, and a light golden brown.

Typically the Dutch Baby will rise above the sides of the cast iron skillet, until removed from the oven when it will deflate (like a souffle). Also, if it appears that your Dutch Baby is still 'wet' in areas, it is most likely pooled butter as long as the rest of the Dutch Baby looks done.

Remove the Dutch Baby from the oven and serve immediately. Top it with confectioners sugar and lemon, fruit, or your favorite syrup or jam. Enjoy!

*The lower the fat percentage in the milk used in this recipe, the higher the Dutch Babies will rise - so try it out with low-fat or non-fat milk! 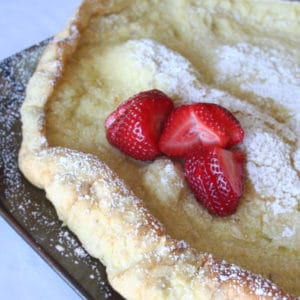 Print Recipe Leave A Comment
Love This Recipe?Click On A Star To Rate It!
5 from 10 reviews

*Although you can use whatever milk you have on hand, using low-fat or non-fat milk will make the Dutch Baby Pancake puff higher in the baking process. Like a souffle, the baked pancake will start to deflate once out of the oven so be prepared to serve it immediately. https://bakeitwithlove.com/dutch-baby-pancake-recipe-cast-iron-skillet-dutch-babies/