If you thought your banana bread couldn't get any better, try your hand at my Chocolate Chip Banana Nut Bread Bread Pudding for a sensational dessert! 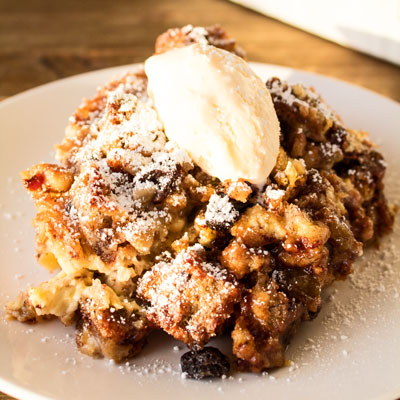 Our family LOVES banana bread, and using up any leftovers in this outrageously delicious Chocolate Chip Banana Nut Bread Bread Pudding means not a single bit goes to waste!

Made from our tasty chocolate chip banana nut bread loaf, the already flavorful banana bread is baked in a creamy custard with the addition of raisins, golden raisins (also called sultanas), and some more crushed walnuts.

This quick dessert is also an excellent use of any banana bread (or banana muffins) that may have managed to get more than a few days old. I tend to bake up my banana bread in batches, typically baking at least two varieties at a time, so on occasion there is actually some unused bread ends still stacked away in the refrigerator. Truly, it doesn't happen often!

In this case, however, the family sacrificed about ¾ of a full loaf of their beloved chocolate chip banana nut bread for a decadent dessert. They got lucky, I used a small casserole dish and left hubby and daughter with a nice thick slice of moist banana bread to enjoy while I tore up the remainder of the loaf.

My base bread pudding ingredients include stale bread, heavy cream, sugar, eggs and egg yolks, vanilla, and some combination of dried fruit (typically raisins and golden raisins (sultanas), but I also like to use dried cranberries, cherries, or apricot) and possibly a nut variety or some chocolate chips as well.

What To Serve With Bread Pudding? 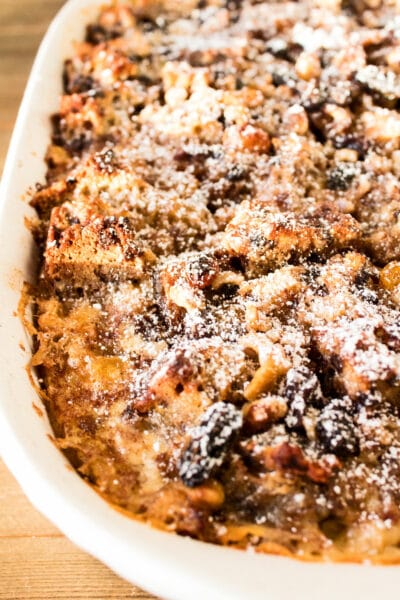 Bread pudding (or bread and butter pudding as it is known in the UK) is based on being a way to use up stale bread, to save it from going to waste. This was a common use of stale bread that originated as early as the 11th and 12th century, and was known in England as 'poor man's pudding' in the 13th century.

So, no. Stale bread isn't necessary for making truly wonderful bread pudding for any reason!

Can Bread Pudding Be Made Ahead of Time?

This is a super easy dessert to make ahead of time! Simply assemble the bread layers and pour the custard sauce over the layers, then refrigerate overnight until ready to bake your bread pudding. The custard will soak into your bread overnight, making it even more scrumptious! *Note that overnight is all the longer the bread should soak, if it remains unbaked much longer your bread will get soggy and take on a 'loose' texture once baked.

Does Bread Pudding Need to be Refrigerated?

Baked bread pudding should be stored in the refrigerator once it has cooled. I recommend either an air tight container, or tightly wrapped with cling film over your baking dish. Reheat any unused portions when ready to serve.

How Long Can Bread Pudding Keep in the Refrigerator?

Your leftover bread pudding can be stored in an air tight container in the refrigerator for 3-4 days. I recommend that it is used within the first one or two days for best results and flavor, as days three and four the texture loses firmness. 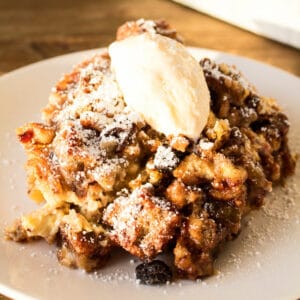