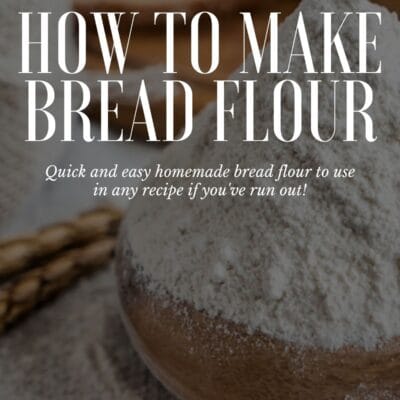 Why Would You Need DIY Bread Flour

Unless you are a very frequent baker, it may not be practical to keep specialty flours like bread flour on hand. It will likely sit on the shelf, taking up space until the once in a blue moon you actually need it.

So what do you do when you get the urge to do some baking and you see bread flour on the ingredient list? You learn how to make bread flour for yourself!

What Is Bread Flour?

Bread flour can be white or wheat and has a high protein percentage (12-14%) compared to other types of flour. The added protein helps produce extra gluten which leads to chewier bread with a better rise!

It is called 'bread flour' because high-protein flour is required by many yeast bread recipes so that enough gluten is produced to give the dough some elasticity.

In the United Kingdom they often refer to bread flour as 'strong flour' or 'strong bread flour'. These are alternate terms for the same thing, there is no true difference between strong flour and bread flour.

All-purpose flour is indeed versatile. However, its low protein percentage (8-11%) isn't high enough to produce the amount of gluten that bread dough needs to be light and stretchy.

Can I Use All-Purpose Flour In Place Of Bread Flour?

The short answer? Yes. The long answer? Also yes, but be aware that the density of your baked goods will be altered.

Your bread will still turn out delicious if made with all-purpose flour, it just may not have the intended texture and density. You can tell a difference, particularly if it's a recipe you make frequently.

An even better option would be to turn that all-purpose flour into bread flour!

How To Make Bread Flour At Home

An airtight container or Ziplock bag is essential in slowing down the oxidation process of flour. Additionally, this will also keep out unpleasant odors.

Seal it tightly and store it in a cool, dry place for up to a year. 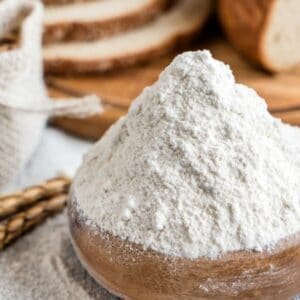 Print Recipe Leave A Comment
Love This Recipe?Click On A Star To Rate It!
4.5 from 2 reviews

How To Make Bread Flour

Learn how to make bread flour at home so you don't have to run to the store every time you see it in a recipe! Instead of paying for a specialty flour you probably won't use more than once, try making your own bread flour out of all-purpose flour! These simple instructions on how to make bread flour will have you baking in no time!
Author | Angela
Servings: 1 cup
Calories: 472kcal
Prep 5 minutes
Total Time 5 minutes
Pin Recipe Share on Facebook