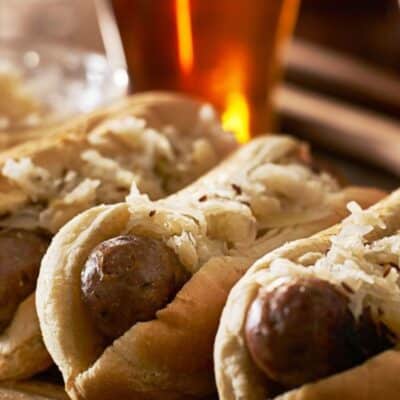 Different types of German sausage have a variety of unique flavors and can be featured in many different tasty recipes! Here is the ultimate guide to all of the best and most popular German sausages! From bratwurst to weisswurt, we are going to discuss all of them!

If you want to know more about German sausage then the list below will tell you about all the delicious types, what they are made with, and how they are served.

For some delicious, German-inspired recipes, check out my list of Oktoberfest menu ideas! Additionally, you can try some of my favorite sausage recipes!

The most common of all the German sausages is, of course, the bratwurst. This German sausage is made from meat that has been finely chopped and is made with either pork, veal, or beef.

Frankfurter Würstchen is a pre-cooked sausage that is eaten everywhere in the world. Common versions of this sausage are the American hot dog, Vienna sausages, and franks.

Leberwurst is made with pig or calf liver and is a thin spreadable sausage that is used to make open-faced sandwiches. This sausage is seasoned with spices such as black pepper, thyme, ground mustard, and nutmeg.

Weisswurst is a German white sausage that is made with bacon, minced pork back, and veal. It is traditionally flavored with parsley onions, lemon zest, ginger, cardamom, and mace.

Blutwurst is a blood sausage that is made from pig blood and pork rind. It is pre-cooked and often served warm with mashed potatoes.

This traditional German sausage is made with mixed pork, beef, and veal. It is grilled or roasted and served hot with a roll or on a sandwich.

Kochwurst is a unique sausage that is made from leftover ingredients such as tongue, blood, and liver. The ingredients are cooked and seasoned, then they are put into a casing or jar and served within a day or two.

Knipp is made with pork head, pork belly, pork rind, oats, broth, and seasoned with salt, allspice, and pepper. This smoked sausage is often served with sweet side dishes such as applesauce or sweet pumpkin.

Gelbwurst is a light-colored sausage that is made with pork, veal, ginger, and nutmeg. It's often sliced thin and eaten on cold sandwiches.

Jagdwurst is a German sausage that is made with various cuts of pork such as pork belly, pork sausage, and lean pork. Sometimes beef is added as well, and it is seasoned with delicious spices and herbs. It can be eaten hot in soups or cold on sandwiches.

This delicious sausage is made with pork chunks and ground pork then seasoned and stuffed into a beef casing that is made from the intestines. Many people choose to eat this sausage cold, but it can be heated and eaten hot on a roll as well.

Teewurst is a fatty sausage that is made from bacon and pork. This sausage is almost half fat which allows it to be spreadable making it perfect for sandwiches.

Debrecener is a pork sausage that is made with garlic, marjoram, paprika, and pepper. The amble amounts of spices made this sausage a mixture of red and orange. It is often sliced thin, then broiled or baked.

Extrawurst is a well-seasoned sausage that is made from beef, pork, and bacon fat. It is sliced thin and served cold on sandwiches, subs, and hoagies.

Currywurst is a German sausage dish that is made with bratwurst and seasoned with curry powder, Worcestershire sauce, and tomato sauce. This dish can also be made with other sausages as well.

Ahle wurst is a hard pork sausage that is made from bacon and pork. This sausage is mainly seasoned with only salt and pepper, but other spices can be used such as clove, sugar, or garlic.

Wollwurst is a sweet sausage that is made from pork and veal. It is long and thin with no casing on the outside. Wollwurst is often served with German potato salad or gravy.

Leberkase is made with finely crushed corned beef, pork, and onions. This sausage can be sliced and pan-fried until the outer edges are crispy and crunchy, then served with creamy scrambled eggs or homemade fries.

Bierwurst is a German smoked sausage that is cooked on a smoker and seasoned with garlic, paprika, black pepper, and mustard seeds. This sausage is often used for sandwiches and hoagies.

Where To Buy German Sausage

You can pick up German sausage at your local supermarket! Depending on the specific variety you are looking for, some are easier to find than others.

However, a butcher shop should carry most, if not all, of these German sausages!

❓ What Is Another Name For German Sausage?

German sausages are also known as wursts! Technically, it means a large sausage that is specifically made in Germany or Austria!

❓ What Is White German Sausage Called?

The white sausage that we all know and love is called Weisswurst (which literally translates to 'white sausage'). 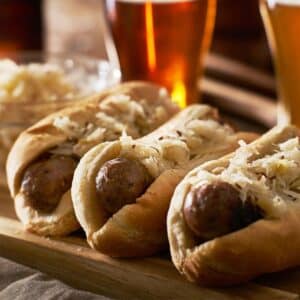 Print Recipe Leave A Comment
Love This Recipe?Click On A Star To Rate It!
No ratings yet

Different types of German sausage have a variety of unique flavors and can be featured in many different tasty recipes! Here is the ultimate guide to all of the best and most popular German sausages! From bratwurst to weisswurt, we are going to discuss all of them!
Author | Angela
Servings: 6 servings
Calories: 220kcal
Prep 5 minutes
Cooking 20 minutes
Total Time 25 minutes
Pin Recipe Share on Facebook

For direct grilling brats a little low and slow is the way to go, at high temps the brats will burst. Do not pierce the casing the great juices will pour out leaving you a kind of dried sausage. Finished temps should be between 160°F (72C) and 180°F (82°C).