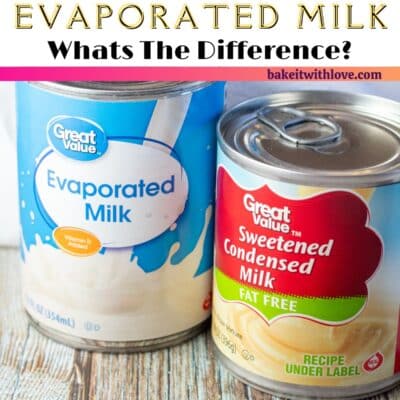 How are sweetened condensed milk vs evaporated milk different and can they be used interchangeably in recipes? We discuss the answers to these questions and more in this article on these two very common pantry staples! Take a look at these facts about sweetened condensed milk vs evaporated milk so you can make an informed decision on which to use!

Over the years milk has gone through many changes. It has been modified to create varying fat content. It has gone dairy-free and has been made from nuts, seeds, and plants. In the early days, it was pasteurized to make it last longer.

Two variations of milk that were created out of a need for milk that wouldn’t spoil are sweetened condensed milk and evaporated milk. Initially, you may think these are also dairy-free. However, despite being sold in the pantry aisle these two kinds of milk do come from cows.

Keep reading to find out more about these two dairy products that are perfect pantry staples.

What is Sweetened Condensed Milk?

Sweetened condensed milk is made from cow’s milk that has been condensed. The process of condensing the milk is done by heating the milk. The milk is heated until about 60 percent of the water has evaporated. This process is also one way to pasteurize the milk.

Once the water has evaporated the milk becomes a thick and creamy consistency. The flavor is also richer compared to regular whole milk. This is a result of the natural sugars in the milk coming out when heated.

In addition to the natural sugars in the milk, more sugar is added. Condensing the milk and adding sugar is where the name comes from.

A benefit of sweetened condensed milk is that it does not need to be refrigerated. This is a result of both the pasteurization process and the addition of sugar (sugar prevents the growth of bacteria).

How is Sweetened Condensed Milk Used?

In addition to desserts, sweetened condensed milk is used as the base in candies. It is used to make caramels, fudge, and many other candies.

While you won’t likely reach for a cold glass of sweetened condensed milk, it is used in making sweet drinks. Try a traditional Thai Iced Tea or Thai Coffee to taste how delicious this creamy milk is when added to cold beverages!

What is Evaporated Milk?

Evaporated milk is literally milk that has been evaporated. It goes through essentially the same step that sweetened condensed milk goes through in the beginning.

Milk is heated until the water evaporates (evaporated milk can be made from whole milk or skim milk). Like sweetened condensed milk, about 60 percent of the water is removed through evaporation. This process brings out the natural sugars in the milk.

This shelf staple is a great choice for food storage. With a shelf life of about 15 months, it is great to keep in the pantry. Then you have it on hand for special recipes and as a substitute for regular milk.

How is Evaporated Milk Used?

Evaporated milk is more versatile than sweetened condensed milk. This is because it is not as sweet. Therefore, it can be used in both savory and sweet recipes. As mentioned above, it can even be used to replace regular milk.

In addition to savory dishes, evaporated milk is also used in many sweet treats. You can’t make a perfect pumpkin pie without this key ingredient.

Evaporated milk is even used in making some types of bread. It adds an added level of moisture and rich flavor to sweet bread or similar breakfast dishes.

What are the Differences between Sweetened Condensed Milk & Evaporated Milk?

As you can see from above there are many similarities between sweetened condensed milk and evaporated milk. You can also see some differences. Here is a quick comparison for reference when you are cooking.

Can you Substitute Sweetened Condensed Milk for Evaporated Milk?

Use these two posts to learn more about the best substitutes for these two types of milk. There are even some non-dairy substitute suggestions!