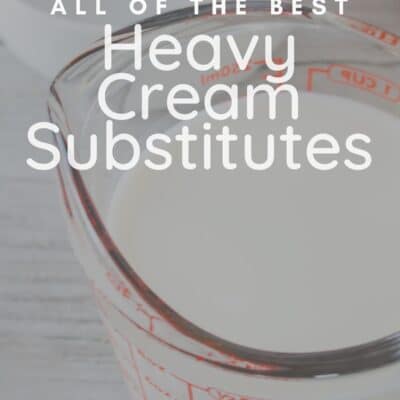 If you're in need of a heavy cream substitute, we have plenty of alternatives that can help you out of a bind! Whether you need heavy cream for a rich sauce, a savory soup, or a decadent dessert, there is a substitute that can get the job done!

Thick and creamy potato soup, tasty cheese sauce, savory gravy, moist chocolate cake, fluffy whipped cream. When it comes to some of the best dishes around, heavy cream is at the center of each one!

What do you do if you run out of this golden ingredient? While nothing is the exact same as heavy cream, several alternatives will still give you the rich decadence you want!

When it comes to finding a substitute for heavy cream, there are several other dairy substitutes. Many of these are the easiest to use because they call for ingredients you most likely already have in your fridge. Therefore, you can grab them in a pinch.

The one thing you will not be able to find a substitute for in this list is a replacement for making whipped cream. When it comes to making whipped cream, heavy cream (or heavy whipping cream) is really the only dairy option that will give you the fluffy and yummy, sweet topping.

However, if you jump down to the dairy-free substitutes, you will find a wonderful alternative with coconut cream!

If you need a heavy cream substitute for your favorite creamy soup or sauce though, any of these alternatives will do the trick.

The best substitute for heavy cream is half & half with butter. Half-and-half already has a high fat content. By adding a little bit of butter, you can mimic the fat content of heavy cream.

It only takes a little bit of butter to make 1 cup of heavy cream.

Mix the two together thoroughly! Keep stirring (or whisking) quickly until it thickens. Use the mixture in a 1:1 ratio for any recipe that calls for heavy cream.

Since half-n-half already has a high fat content, you can also use it on its own to thicken soups and sauces.

Whole milk can also be mixed with butter as a substitute. However, milk has less fat than half-in-half so you will need more butter.

Use the mixture above to replace 1 cup of heavy cream in sauces and baked goods. You can also measure a 1:1 ratio from the mixture for smaller quantities.

Cornstarch is a common thickening agent for soups, sauces, and gravies. While it is usually used with water to thicken foods, it can be added to milk to mimic heavy cream.

This is a good choice if you want to eliminate some of the fat of heavy cream. It also works well with lower fat milks. While it can be used in place of heavy cream for soups and sauces it is not a great choice for baking. The lack of fat will result in dry baked goods.

Use the following measurements to replace 1 cup of heavy cream.

If you don’t need a full cup of cream just measure a 1:1 ratio from the mixture to use in your recipe.

Evaporated is not as thick as heavy cream, but it is thicker than regular milk. Therefore, it can be used in pinch to quickly thicken soups and sauces. It is also a good choice for baking.

Use evaporated milk in a simple 1:1 exchange. The results won’t be quite as creamy or moist as if made with heavy cream, but it will have a nice light creaminess.

In addition to the milk combinations above, many other dairy products can mimic the effects of heavy cream. However, most of these have a flavor that may impact the overall dish. In a pinch though, grab one of these options from your fridge and try it out.

This is an extremely easy alternative if you keep yogurt on hand! Use in a 1:1 ratio for baking or savory sauces.

Mix equal parts to get the consistency of cream. Use in a 1:1 ratio for dishes that will benefit from a little extra tanginess.

Use in place of heavy cream for a little tangy taste in any dish. Can be used in a 1:1 ratio in any recipes.

Mix with a bit of sugar to create a sweet base to use in desserts. Use in a 1:1 ratio for heavy cream.

Thin out with milk of choice until it has a consistency like cream. Works best for adding creaminess to soups and sauces.

Use the thinned-out mixture in a 1:1 ratio.

Heavy cream adds the perfect touch of creaminess to so many dishes. Not to mention, whipped cream! If you follow a vegan or dairy-free diet, you may think you have to miss out on these things. You don’t!

With so many dairy-free alternatives, you can enjoy all the yummy creaminess that heavy whipping cream adds to dishes, without the dairy.

Canned coconut cream is the most important vegan substitute to know about because it is the only one that will replace whipped cream.

While all the other substitutes can work for sauces and soups, they won’t whip. Therefore, coconut cream is the one to keep in mind when you want that creamy topping.

In addition to being the best non-dairy choice for whipped cream, coconut cream can also be used in any other recipe. When using it in a recipe, whether baking or cooking, you will prepare it a bit differently.

Rather than chilling the coconut cream, leave it at room temperature. Pour the liquid and the cream into one bowl and thoroughly mix. This will give you a thick and creamy base.

Use this in a 1:1 ratio as a substitute for any recipe that calls for heavy cream. As with any coconut substitute, be mindful that it will impart a slight coconut flavor to your dish.

Place the hardened cream in a separate bowl and whip using your hand mixer (or another mixer). You can also add sugar and vanilla just like you would with heavy whipping cream.

Measure whipped coconut cream in a 1:1 ratio for any dessert you would use whipped cream for.

Canned coconut milk is slightly thinner than coconut cream. However, if you get the full-fat version it is still thick enough to add a wonderful creaminess to soups and sauces. You can also use it when making dense cakes and other baked goods.

Prepare to use canned coconut milk the same way as described above: pour into a bowl and whisk together the milk and any separated liquid.

Use in 1:1 exchange for heavy cream in soups and sauces. Canned coconut milk will NOT work for whipped cream.

Grab your favorite plant-based milk and oil to make a dairy-free substitute like the milk and butter option above.  A popular blend is soy milk and olive oil. You can use any combination of your choice though.

The only thing to consider when choosing which plant-based milk and oil to use is the possible change in flavor. Almond milk and soy milk have a milder flavor than coconut milk. Also, make sure you choose an unsweetened version.

Olive oil offers a nice savory finish to the creamy base. Coconut oil is also a wonderful option if you want that added coconut flavor. Whatever blend you choose, follow the measurements below to make 1 cup of a heavy cream substitute.

Mix the milk and oil until it starts to thicken. Then use the mixture in a 1:1 ratio for soups, sauces, or baked goods that call for heavy cream.

If you want a heavy cream substitute that is lower in fat, just whip up your favorite plant-based milk with a thickening agent. Cornstarch is a standard. If you prefer non-corn products though, arrowroot powder is a great alternative.

Mix the following together to replace 1 cup of heavy cream.

If you don’t need a full cup, just cut this in half (½ cup of milk + 1 tablespoon of cornstarch). Moreover, you can mix the measurements above and then measure what you need in a 1:1 ratio for the heavy cream.

This substitute is best used to thicken soups or sauces. It can also be used in baking, but it will likely produce a drier cake, cookie, etc. since there is no fat.

While it cannot be used straight out of the package, with a little bit of milk tofu becomes a great substitute. Place your tofu in a food processor and add a splash of milk (to begin).

Blend. Add more milk slowly if needed, until it begins to resemble the consistency of heavy cream.

Use in a 1:1 ratio for heavy cream in baked goods, soups, and sauces.

If you follow a vegan diet, then you probably already know how amazing cashews can be for making a creamy base. These nuts have a mild flavor that is great at taking on the flavors around them. Therefore, it doesn’t shift the flavor of a dish too drastically.

Follow the directions below to replace 1 cup of heavy cream in any recipe.

I know I said earlier that coconut cream was the only choice for whipped cream; however, cashew cream can also work in a pinch. Chill the blended cashew cream and then whip it with sweetener.

With so many options, you are sure to find the right substitute for your recipe. Let us know if you found a heavy cream substitute that worked for you! 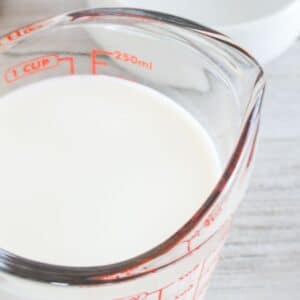 Heavy Cream Substitute: The Best & Easiest Alternatives For Any Recipe!

If you're in need of a heavy cream substitute, we have plenty of alternatives that can help you out of a bind! Whether you need heavy cream for a rich sauce, a savory soup, or a decadent dessert, there is a substitute that can get the job done!
Author | Angela
Servings: 1 serving
Calories: 481kcal
Prep 2 minutes
Cooking 0 minutes
Total Time 2 minutes
Pin Recipe Share on Facebook

*Nutritional information is calculated for the half & half + butter only.