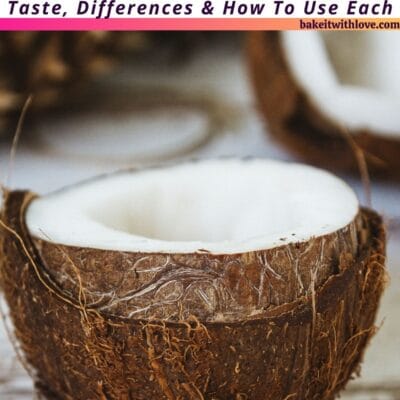 Knowing the difference between coconut milk vs coconut cream can really come in handy, especially when doing any non-dairy cooking or baking! Here is everything you need to know about coconut milk, coconut cream, coconut water, and cream of coconut to help you in all of your culinary endeavors!

How to use coconut milk vs coconut cream in all of your dairy-free cooking and baking!

Just like you would choose between different dairy products for certain recipes, such as heavy cream or whole milk, the same goes for choosing a non-dairy option.

Coconut milk and coconut cream are two popular choices for non-dairy milk. They are especially useful for those following a Paleo or Vegan diet.

Just like their dairy counterparts, heavy cream and milk, the percentage of fat is the primary difference between the two.

While the fat percentage may seem like a small difference, it can greatly impact the overall recipe. Therefore, it is helpful to understand how that fat content impacts different types of recipes.

Let’s first look at the fat content in coconut milk. After that, it will be easy to see the difference between coconut milk vs coconut cream, and how these two can be substituted for one another in certain recipes.

What is Coconut Milk?

Both coconut and coconut water are edible ingredients. Coconut is mostly sold shredded and can be found on the baking aisle in the grocery store. Coconut water is popularly sold in cartons and is commonly used by athletes due to the electrolytes it contains.

So, where does coconut milk come from? Coconut milk is made from blending coconut meat with coconut water. The ratio of coconut water to coconut is what determines what the final product is considered.

The Difference between Coconut Milk in a Can & a Carton

Traditional coconut milk is sold in a can. You will find this on the Asian cooking aisle in the grocery store and sometimes on the cooking aisle. This is the standard coconut milk that has a 9-15% fat content.

The coconut milk you find in the refrigerator section is a bit different. The coconut milk in the cartons is like skim milk – more water and less fat. This is what many call “lite coconut milk” as it has less than 9% fat.

What is Coconut Milk Used for?

Beyond its rise in popularity as a smoothie base, traditional coconut milk has a long history in the kitchens of Southeast Asia and India. Thai food and Indian food are known for their use of creamy coconut milk in staples like curry.

Coconut milk is also a delicious base for creamy soups and teas. In addition, many people who do not eat dairy find coconut milk to be the perfect replacement for milk in all their favorite recipes, from lattes to cakes.

What is Coconut Cream?

Just like in the world of dairy, where cream has a higher fat content than milk, the same goes for coconut cream. Coconut cream is made the same way as coconut milk, but with a higher ratio of coconut meat to water.

The fleshy part of a coconut has the highest fat content; therefore, by having a four to one ratio of coconut “meat” to coconut water, there is a naturally higher fat content. Typically, the fat content of coconut cream is between 19-22%.

Coconut cream is much thicker than coconut milk. In fact, it almost appears to be solid when you open the can – with just a small amount of coconut water at the bottom.

Just like traditional coconut milk, coconut cream is also sold in cans. They are often right next to each other in the grocery store, so be aware of which can you are grabbing for your recipe.

The Difference Between Coconut Cream and Cream of Coconut

When purchasing coconut cream, look for the can on the Asian cooking aisle or the baking aisle. This will almost certainly ensure you get the ingredient you are looking for – coconut cream.

Cream of coconut is a very different ingredient. This is a mixture of coconut meat with sugar and water to create a sweetened coconut cream. This is usually sold in a plastic bottle near the cocktail mixers because, you guessed it, this is the yummy stuff often used to make pina coladas!

While a bit of sugar is perfect for a cocktail, you do not want to use cream of coconut in your regular cooking or baking. It will be much too sweet.

If you are looking for that sweet creamy deliciousness for cocktails and you don’t have cream of coconut, you can use coconut cream!

Simply mix one can of coconut cream with sugar using a whisk or hand mixer. I suggest starting with a ¼ cup of sugar and then adding more as needed for your desired sweetness.

What is Coconut Cream Used For?

Just as heavy cream is a decadent dessert ingredient in the dairy world, coconut cream plays a similar role in the non-dairy world. Coconut cream can be whipped to make a non-dairy version of whipped cream as well as used to make dairy-free ice cream.

Coconut cream is also used in many of the same recipes that call for coconut milk in Southeast Asian and Indian cuisine. It can be used in curries and soups, although it will provide a much thicker base.

Therefore, it is often diluted with a bit of water or broth to eventually resemble the consistency of coconut milk.

Can you substitute coconut milk for coconut cream?

The great thing about coconut milk and cream is that the only difference between the two is the water and fat content. Therefore, the two are easily used in place of one another.

How to Substitute Coconut Cream for Coconut Milk

When swapping coconut cream for coconut milk, you will just need to water it down a bit. In the can of coconut cream, you will notice a bit of extra coconut water at the bottom.

Begin by mixing this into the cream. Then, thin it out a bit more until you reach a milkier consistency. You can use regular water to thin out the coconut cream.

You can also use a little extra vegetable or chicken broth if you are making a stew or soup.

How to Substitute Coconut Milk for Coconut Cream

Scrape out the cream, leaving the water in the can. Then use the cream as you normally would in your recipe.

Can You Use Lite Coconut Milk as a Substitute?

The substitutions above only work when you have regular coconut milk in a can. Lite coconut milk that comes in a carton is too thin. It also contains very little of the actual coconut cream; therefore, you cannot swap it out for cream.

Lite coconut milk has made a name for itself in recent years, but if you haven’t tried the original version, it is worth giving it a go!

We hope you found this information about coconut milk vs coconut cream useful. If you would like to see more articles like this one, let us know by leaving a comment below! 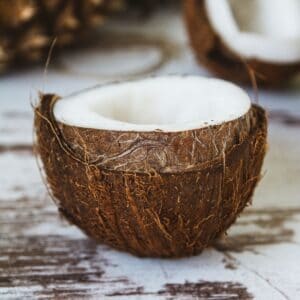 Print Recipe Leave A Comment
Love This Recipe?Click On A Star To Rate It!
4.75 from 4 reviews

Knowing the difference between coconut milk vs coconut cream can really come in handy, especially when doing any non-dairy cooking or baking! Here is everything you need to know about coconut milk, coconut cream, coconut water, and cream of coconut to help you in all of your culinary endeavors!
Author | Angela
Servings: 4 servings
Calories: 209kcal
Prep 5 minutes
Cooking 0 minutes
Total Time 5 minutes
Pin Recipe Share on Facebook