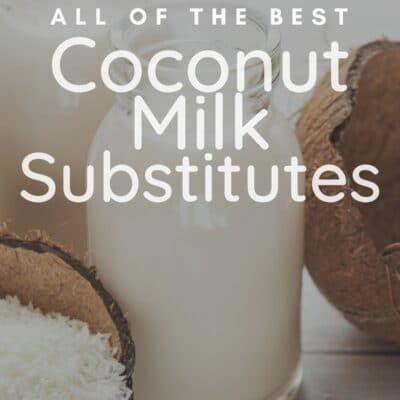 A great coconut milk substitute isn't hard to find, and with this list of simple alternatives you can easily swap it out in any recipe! Whether you're looking for dairy-free or vegan options, or you simply ran out of coconut milk, this list will have the best substitute to suit your needs!

Coconut milk is a new staple in vegan and dairy-free diets. However, it has been a staple ingredient for cooking in Indian, Asian, and Middle Eastern cuisine for centuries.

The consistency of coconut milk is perfect for creating a rich and creamy base for sauces and soups. If you have ever had curry, you know exactly what I’m referring to. Additionally, coconut milk is an amazingly perfect base for smoothies and many desserts!

Before diving into substitutes, it is important to understand a few things about coconut milk. Specifically, the difference between coconut milk, coconut cream, and coconut milk in a carton.

Coconut cream is also made by blending coconut meat with water. The difference is the ratio of water to coconut meat.

Coconut cream is made with more coconut meat and less water. Resulting in a higher fat content and thicker cream consistency. On the other hand, coconut milk has higher water content and less coconut meat. Therefore, it is less thick and has less fat.

Both traditional coconut milk and coconut cream are sold in cans. Therefore, be mindful when you grab a can off the shelf that you have the right product.

Coconut Milk in a Carton

While almost all recipes are referring to traditional coconut milk, it doesn’t mean you can’t use light coconut milk. Coconut milk in a carton is a great substitute! However, it will change the consistency.

Therefore, look at the best way to use each one. Moreover, if you do not need to maintain a dairy-free dish then you can use several dairy-based substitutes!

Pour the entire can of coconut cream into a bowl (including any coconut water in the can). If the coconut cream has previously been refrigerated, let it come to room temperature first.

Slowly add regular water to the cream and stir. Add just enough water until it resembles the consistency of thick milk (such as whole milk or buttermilk).

Diluted coconut cream can be measured in a 1:1 replacement for coconut milk in any recipe. This is the best choice for maintaining the original taste and texture of your recipe.

Coconut milk in the carton is on the opposite side of the coconut substitutes. It is going to be thinner than traditional coconut milk.

The thinner consistency of light coconut milk will not impact the other texture of some recipes. It can be used as-is in smoothies and some desserts. However, it will be too thin to provide a rich creamy base for soups and sauces.

If you want to create a thicker base, try adding a thickening agent. A little bit of coconut flour is best as it will maintain the coconut flavor. Cornstarch, arrowroot powder, and even wheat flour can also be used.

Light coconut milk can be used in a 1:1 ratio for all recipes. If adding a thickening agent, use 1 tablespoon for every 1 cup of milk.

Any nut milk will work as a substitute for coconut milk. Most types of nut milk come in a carton and are processed in a similar way to light coconut milk.

Therefore, they have high water content and less fat than traditional coconut milk. This means that nut milks will also have a thinner consistency.

Some of these have neutral tastes that will take on the flavors of the other ingredients. Moreover, if you don’t like the taste of coconut, one of these options may be better suited for your taste.

Cashew milk has a higher fat content than other nut kinds of milk. Therefore, it will provide a creamy base for soups and sauces.

While it has a mild nutty flavor, its overall flavor is more neutral than other kinds of nut and plant-based milk.

Macadamia nut milk has the closest taste to coconut milk. It is also higher in fat than others, like almond milk.

If you want a close replacement for taste and texture, macadamia nut milk is a tasty option. It is good for any recipe that calls for coconut milk.

Almond milk is the most common type of nut milk. Therefore, it may be the easiest to find (or the one you already have at home).

This alternative is thinner than other nut milk, as it is made with a lot of water. This makes it a better choice for use in smoothies and desserts. However, it can be used in soups and sauces if you thicken it up.

In addition to the thickening agents mentioned above, you can use 1 tablespoon of lemon juice to thicken 1 cup of almond milk. This creates sour milk that is thicker, but also provides a tart taste.

If you have a nut allergy, then nut milk may not work for you as a substitute. If you still prefer a non-dairy option, you can use any of the alternatives below.

These plant-based milk substitutes can be used in a simple 1:1 ratio. As they are also thinner than traditional coconut milk, you can also thicken them up when using in sauces or soups.

In addition to almond milk, soy milk is the most common non-dairy milk to have at home. Like almond milk, it can be used in place of coconut milk in any recipe.

Soy milk has a distinct flavor that will come through in many recipes. Especially when it is heated. It is best used in recipes that have strong flavors that will prevail over the soy taste.

Oat milk is a new favorite on the block. It is the perfect plant milk to make a frothy latte and offers a lovely, sweet taste to recipes.

This sweeter taste is a nice substitute for coconut milk in desserts but can also play well with certain sauces. It also holds up better in high heat than most other types of plant and nut milk.

While rice milk is both soy and nut-free (like coconut milk), it has the highest water content of any plant milk. This makes it difficult to achieve a thick and creamy base (even with an added thickening agent).

This is a good choice for smoothies, but it will not add the desired creaminess to other dishes. It is also not ideal for baking.

Even though tofu is not milk, it is a great alternative! It is one of the best non-dairy substitutes for maintaining the desired thick, creamy consistency coconut milk offers.

Simply blend soft tofu with your milk of choice. Blend until it resembles the creamy consistency of coconut milk.

Use diluted tofu in a 1:1 ratio for coconut milk in any recipe.

In addition to the several non-dairy substitutes, there are plenty of dairy alternatives! These will offer a similar creamy base for any of your recipes that call for coconut milk. Moreover, these are easy ones to find in the store (or in your fridge).

Heavy cream (or heavy whipping cream) has a high-fat content that provides a wonderfully rich and creamy texture to recipes.

While it is a bit thicker than coconut milk, it is not too thick to use in a simple 1:1 substitution in soups and sauces.

When baking, dilute the cream a little. Mix ¼ cup water with ¾ cup cream to equal 1 cup of coconut milk.

Evaporated milk is a great staple to keep in your pantry. This milk product is produced by heating the milk to reduce the water content to about 60%. The result is a nice thick and creamy consistency.

Evaporated milk can be used to replace coconut milk in a 1:1 ratio in any recipe.

Regular cow’s milk can be used in place of coconut milk in any recipe. Whole milk works best, as it provides the closest consistency to coconut milk.

Use milk in a 1:1 exchange. If it does not thicken the recipe enough, add a tablespoon of flour to 1 cup of milk (or another thickening agent) to thicken it up.

The thick and creamy consistency of Greek yogurt is a fun alternative for adding a tangy taste to your recipe. However, its tangy taste is quite different than coconut milk.

Add a splash of water to the yogurt (about 1 tablespoon for every cup of yogurt) to get a milky consistency, then measure in a 1:1 ratio.

Like Greek yogurt, sour cream can also be used in place of coconut milk. Depending on if it is full-fat or low-fat, the consistency will vary. Add a bit of water as needed to get the right consistency.

While it may not be ideal for a smoothie, the tanginess of sour cream compliments the flavors of many recipes. It can even elevate a dessert by adding new flavor notes.

Once diluted, use sour cream in a 1:1 exchange for coconut milk.

Each and every one of these ingredients would make a wonderful coconut milk substitute, depending on the recipe! Let us know what you're cooking in the comments below! 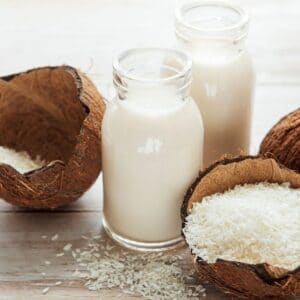 A great coconut milk substitute isn't hard to find, and with this list of simple alternatives you can easily swap it out in any recipe! Whether you're looking for dairy-free or vegan options, or you simply ran out of coconut milk, this list will have the best substitute to suit your needs!
Author | Angela
Servings: 1 serving
Prep 2 minutes
Cooking 0 minutes
Total Time 2 minutes
Pin Recipe Share on Facebook