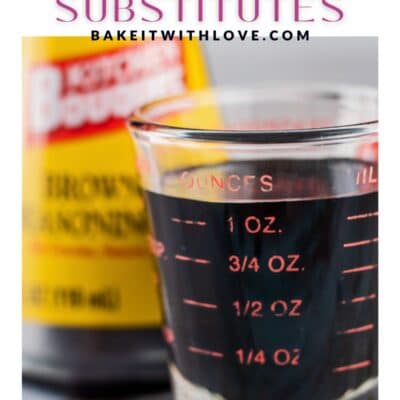 The Best Substitutes for Browning Sauce

There are many reasons that you may reach for a substitute while cooking. One is if you run out of an ingredient. Another is if you don’t like an ingredient (or may even be allergic to it). Another reason is when you don’t know what the ingredient is.

While browning sauce has been around since the early 1900s, it is not used as commonly today. Therefore, your reason for looking for a substitute may be the last – you don’t know what browning sauce is.

What is Browning Sauce?

Browning sauce is a dark liquid that is typically made with caramel coloring or caramelized sugar, vegetable concentrate, and seasonings. This combination gives it a simple yet savory flavor that enhances different foods. Its flavor is often referred to as smoky with a slight sweetness like molasses.

In addition to enhancing the flavor, browning sauce also adds rich brown color. Browning sauce is commonly used to deepen the color and flavor of gravy and other sauces, as well as stews. Home cooks may also use it to enhance the color of a roast just before serving.

If you have never used browning sauce before, I recommend giving it a try. It is easy to find in the grocery store. The most popular brand is Kitchen Bouquet Browning Sauce.

If you can’t get a hold of the store-bought sauce today, try making your own! Moreover, reach for a quick and easy substitute you already have at home.

The best substitute for store-bought browning sauce is a simple sauce you can make at home. While it will take a little extra time, it will give you a wonderful rich savory flavor to use in any recipe.

It also only requires 3 ingredients: brown sugar, water, and salt.

Add the brown sugar to a sturdy saucepan or cast-iron skillet - pans or skillets with heavy bottoms work best for evenly conducting the heat. Begin to melt the sugar on its own by stirring it slowly over low heat.

As the sugar melts it will start to darken the longer it cooks. When the color begins to darken, remove the pan from the heat.

Slowly add the (boiling) hot water while continuing to stir. Once all the water has been added, the final step is to add the salt. Set aside and let the sauce cool completely.

Use your homemade browning sauce in any recipe that calls for it. Store the extra sauce in an airtight container and refrigerate for up to 6 months.

The high smoke point of oil or lard allows the roux to cook longer over high heat until it turns a rich brown color. This type of dark roux is used in Cajun cooking. It is this base that gives Cajun gumbo its deep brown color and rich flavor.

To make your own brown roux gather vegetable oil (or shortening or lard) and flour. You should know that getting a great dark roux will take some time. Plan for at least 30 minutes.

Heat (melt) the oil (shortening or lard) in a sturdy saucepan or cast-iron skillet. Slowly add the flour to the heated oil. Use a whisk to mix the flour and oil together.

Keep whisking until all the flour has been incorporated. Continue to whisk over medium-low heat until the roux turns a golden brown.

The final dark roux will be a thick and lumpy mixture with a golden-brown color. *Like Hershey's chocolate syrup.

Make sure to continue whisking the roux until your pan or skillet has cooled (or the roux will burn)!

There is not a standard substitute ratio of dark roux for browning sauce. It will vary from recipe to recipe.

Dark roux is best used as a base for gravy or another sauce. It can also be used as the base for a stew. Simply replace the regular roux or another thickening agent (cornstarch) with the dark roux.

There are many different types of dried gravy powders. Most of them come in small packets that are sold in a box of 3 or more.

The powder consistency of dried gravy powder is like a dark roux. Therefore, it is best used as another substitute for adding flavor and color to a sauce, soup, stew, or gravy.

Like dark roux, the ratios will vary depending on the brand of dried gravy and the recipe you are using it in. In most cases, you will replace the thickening agent in your recipe with the dried gravy powder.

For example, if your recipe calls for a tablespoon of cornstarch use a tablespoon of dried gravy powder instead. You may need to add more to achieve the right flavor and consistency, but this is a good place to begin.

Sometimes the best substitutes are the ones that are the quickest and easiest. There are a handful of these types of quick and easy substitutes for browning sauce.

However, when going for quick and easy you sometimes must sacrifice taste. Therefore, while the following substitutes are excellent for replacing the color of browning sauce, they may shift the final flavor of your dish.

If using one of the substitutes below choose the one that will best add flavor to your recipe. Whether that be the addition of something a little salty, savory, or sweet.

Browning sauce has a natural sweetness that resembles molasses. Therefore, molasses is a great substitute. Moreover, molasses has a similar consistency.

Molasses comes in three different types: light, dark, and blackstrap. Dark molasses is your best choice as it will provide the closest flavor, color, and consistency to browning sauce.

However, you can also use light or blackstrap. Light molasses will be a tad sweeter and lighter in color. Blackstrap molasses will be similar in color to dark molasses, but its flavor is more bitter and less sweet.

Use dark molasses in a 1:1 exchange for browning sauce in any recipe. If using light or black strap molasses start with just a little bit less and add up to an even exchange if desired.

While more people have probably used or heard of Worcestershire sauce it is another somewhat mysterious brown sauce.

This mysterious brown sauce has a complex flavor that is made from several ingredients. One of its main ingredients is molasses. Therefore, it has some similar flavor notes to browning sauce.

In addition to molasses, Worcestershire sauce is made with anchovies and several other spices. This mixture that is fermented over time produces a lovely rich savory flavor with hints of sweetness.

Use Worcestershire in a 1:1 ratio for browning sauce. It can be used in everything from marinades and sauces to stews and gravies.

This is not a vegan-friendly food due to the anchovies.

Steak sauce is considered another type of browning sauce. However, it is made with a tomato base rather than a simple sugar base.

In addition, steak sauce also includes vinegar and other spices. Therefore, it has a bit more of an acidic flavor than standard browning sauce. However, many find it to work just as well in many recipes.

Use A1 (or a steak sauce of your choice) in a 1:1 substitution for browning sauce. This substitute is best used for glazing meats or creating marinades. It will work in some sauces but is not ideal for gravy.

The sweetness in barbeque sauce resembles the sweet undertones of browning sauce. While there are some similar flavor notes, barbeque sauce will add its own unique flavor.

Use a 1:1 substitution of barbeque sauce for browning sauce for glazing meats and adding flavor to some sauces and dips.

Teriyaki sauce is another sauce rich in flavor and color. It is often sweeter than browning sauce. Therefore, it is best used in recipes that lean towards a sweeter taste.

Teriyaki sauce is a great marinade for meats because the sugar content will create a lovely coating. It is not ideal for use in gravy or stews though.

Use a simple 1:1 ratio of teriyaki sauce in place of browning sauce.

Soy sauce is an easy substitute when you need a simple flavor and color enhancement. Less complex in flavor than other sauces, it has a simple earthy flavor.

The simple flavor leans towards salty and savory, rather than sweet. Therefore, it is best used to add a dash of flavor and color to soups, sauces, and stews.

Like soy sauce, these alternatives are all saltier than browning sauce. Therefore, use ½ the amount the recipe calls for.

Keep in mind that soy sauce, liquid aminos, and liquid seasoning are often made with wheat and are not gluten-free. Moreover, oyster sauce is not vegan-friendly. If you need a gluten-free or vegan-friendly substitute, consider making your own browning sauce.

Coconut aminos are another soy sauce substitute that can be used in place of browning sauce. However, unlike the other ones, this one is less salty. It is also sweeter.

It is still best to start with ½ the amount though as it will shift the flavor a bit.

Your recipe won't be missing an ounce of flavor if you use one of these browning sauce substitutes! Let us know what you're cooking up in the comment section below! 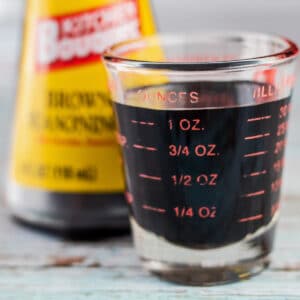