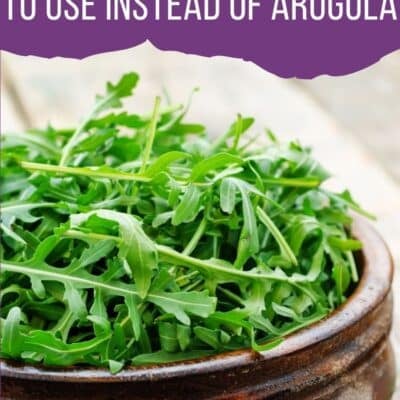 If you need an arugula substitute you have come to the right place because I've listed a number of leafy greens that will do the job! Many of these alternatives will replicate arugula's peppery flavor while offering the same essential vitamins and nutrients! Take a look at these arugula substitutes and find the one that will work best for you!

Best Arugula Substitutes To Use

Another wonderful thing about arugula is that as a member of the green leafy vegetable club, there are several substitutes for arugula that offer both a similar taste and nutrients.

While arugula is most associated with other green leafy vegetables like spinach and lettuce, it is actually a member of the cabbage family. However, when you look at the pointy and thin arugula leaves you would not think of cabbage.

The taste of arugula is also quite different from other members of the cabbage family. In addition, its taste is more distinct compared to other common green leafy foods like spinach and lettuce.

Arugula has a bitter taste with a bit of a peppery punch. And it's a tasty addition to more than just salads!

Choosing a Substitute for Arugula

Many people do not enjoy the distinct flavor of arugula. Therefore, the bitter and peppery taste is a common reason to seek a substitute. On the other hand, you may love the bitter taste and want a substitute with similar qualities.

Whether you want to stick with the bitter taste or find something milder there are several substitutes to choose from. Moreover, all of these substitutes are easy to use. Any of these can be used in an equal 1:1 ratio for arugula.

However, depending on the type of substitute you use a 1:1 ratio may look different (for example, chopped cabbage will be different than chopped arugula). Therefore, feel free to modify the ratio as needed or desired.

Each substitute will also offer its own healthy blend of vitamins and minerals!

Spinach is a good choice if you are looking for a substitute that most people will enjoy. This dark green leafy vegetable has a milder taste than arugula. Therefore, many people find it more palatable.

Spinach can also be eaten raw or cooked, making it another great substitute for arugula.

Since spinach is a favorite for many, it is easy to find in grocery stores. Moreover, it is one you may already have at home and can use as a quick and easy substitute.

While the leaves of spinach are larger and rounder than arugula, this will not impact your dish. The leaves will shrink when cooked or you can easily chop them up to add to a salad.

If you want a substitute with leaves closer in size to arugula, opt for baby spinach. Baby spinach has all the same benefits as regular spinach but with smaller leaves.

Use it in the same way you would use regular spinach as an arugula substitute. *Baby spinach can frequently be found in a blend with arugula that's a perfect combo for salads and more!

If the goal is a mild flavor that still looks like arugula, look for watercress at the store. This small leafy vegetable has a closer appearance to arugula than spinach. However, it is a member of the cabbage family like arugula.

While watercress is milder than arugula, it offers a lovely bright and fresh flavor. This flavor profile pairs well with the same foods that arugula would, but without the peppery taste.

Next to spinach, kale seems to be the most popular green vegetable on the market these days. This may have something to do with the fitness craze around baking kale leaves to make chips.

The ability to withstand the heat of baking is a unique quality of kale. Its leaves are quite sturdy, especially compared to arugula.

This makes kale a great substitute for arugula in soups, stews, and pasta sauces as they will not only withstand the heat but maintain their form.

While kale does not taste like arugula, it has its own distinct and bitter taste. If you do not enjoy the taste of arugula, you will most likely not like the taste of kale. However, if you enjoy a strong flavor, do try kale as a substitute.

Purslane is a dark green vegetable. However, it is not leafy like arugula. This veggie actually looks more like a succulent leaf. It even resembles a succulent when you bite into it, as it has a little bit of a juicy center.

While this is not a likely substitute to already have on hand, it is a great one when you are looking for a flavor substitute. Purslane has a very close flavor profile to arugula. It can also be used in similar ways both raw and cooked.

Another less common vegetable is mache. Mache is sometimes referred to as "corn salad." This is simply because it was found growing in corn fields.

With small flat round leaves, mache looks more like spinach than corn though.Mache not only looks like spinach but also has a similar mild flavor.

In contrast to arugula, mache also has a slightly nutty and sweet flavor. Even though it is not an exact match for arugula, this unique vegetable can be a great alternative when you are looking for a shift away from the bitterness of arugula.

A head of frisee looks a lot like a head of lettuce, with some mild differences in the shape of the leaves. However, frisee is a member of the chicory family rather than the lettuce family.

Therefore, it is a wonderful substitute for arugula in salads. The leaves and flavor will provide a close look, texture, and taste.

Escarole is another vegetable that belongs to the chicory family. Therefore, making it another good arugula substitute with a bitter flavor profile.

Like frisee, escarole looks similar to a head of lettuce. However, escarole has sturdier leaves than lettuce or frisee. This makes it a good substitute for arugula in soups and stews, as well as salads.

If you want a member of the chicory family with a bit more crunch, consider trying endive. This vegetable has sturdier leaves than escarole or frisee, while still offering a similar bitter taste.

The bitter taste of endive is a good substitute for arugula in cold dishes like salads.

Radicchio is a fun alternative you want the bold bitter and peppery flavor of arugula, plus a bold color. Another member of team chicory, radicchio has a bold purplish hue.

Moreover, it is much sturdier than other substitutes like endive or escarole. Rather than resembling lettuce, radicchio has a texture closer to cabbage. For a fun and bold substitute use radicchio chopped up in salads or cooked.

Those yellow “weeds” out in your yard are actually some of the most nutrient-dense veggies around. While the entire dandelion can be eaten, the dandelion greens are especially great as an arugula alternative.

Dandelion greens resemble the look of arugula as well as the bitter taste. Although it does not have the same peppery notes as arugula.

This leafy vegetable can also be cooked or used raw. Just make sure you are not harvesting dandelion greens that have been sprayed with weed killer.

Another set of greens with a nice peppery flavor is radish greens. These are the green leafy tops of the radish. While we often just chop these off and toss them, they can also be eaten.

If you have a bunch of radishes in your garden or the fridge, simply cut off the green tops and use them as a substitute for arugula.

While radish greens are peppery like arugula, radish sprouts are quite mild. However, these microgreens provide the same punch of vitamins and minerals that arugula offers.

Other microgreens (like broccoli sprouts and alfalfa sprouts) can also be used in place of arugula. Whether radish sprouts or another microgreen, these small, leafed veggies are best used raw.

Romaine, iceberg, and butter lettuce are all quite mild in flavor. Therefore, while they offer a similar look as arugula, they do not lend much flavor.

However, red leaf lettuce has a mild bitterness to it. It is not quite as strong as arugula but still a good swap if you want a hint of bitterness.

While you won’t want to add red leaf lettuce to any hot dishes, it is the perfect choice for a cold dish. Especially a salad.

As mentioned earlier, arugula is a member of the cabbage family. Therefore, even though cabbage and arugula don’t share similar properties in looks and taste, you can use cabbage as a substitute.

As a milder-tasting vegetable, cabbage is a good alternative for those who don’t like spinach.  Cabbage can be used in both hot and cold dishes.

In hot dishes, it pairs well with meat in soups and stews. In cold dishes, chopped cabbage will add a lovely crunch.

Bok Choy is also known as Chinese cabbage. It is even milder in flavor than regular cabbage and can be used in the same types of recipes. Therefore, it can also be used as an alternative to arugula.

If you are looking for a very mild flavor while still getting the benefits of a vegetable, give this veggie a try.

We hope this list helped you find the perfect arugula substitute! Tell us what you're cooking in the comment section below! 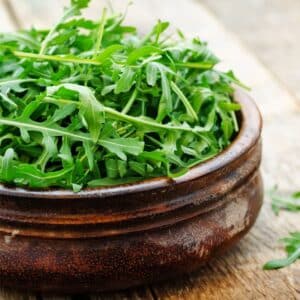 If you need an arugula substitute you have come to the right place because I've listed a number of leafy greens that will do the job! Many of these alternatives will replicate arugula's peppery flavor while offering the same essential vitamins and nutrients! Take a look at these arugula substitutes and find the one that will work best for you!
Author | Angela
Servings: 1 serving
Calories: 7kcal
Prep 2 minutes
Cooking 0 minutes
Total Time 2 minutes
Pin Recipe Share on Facebook

*Nutritional information is calculated for the spinach only.